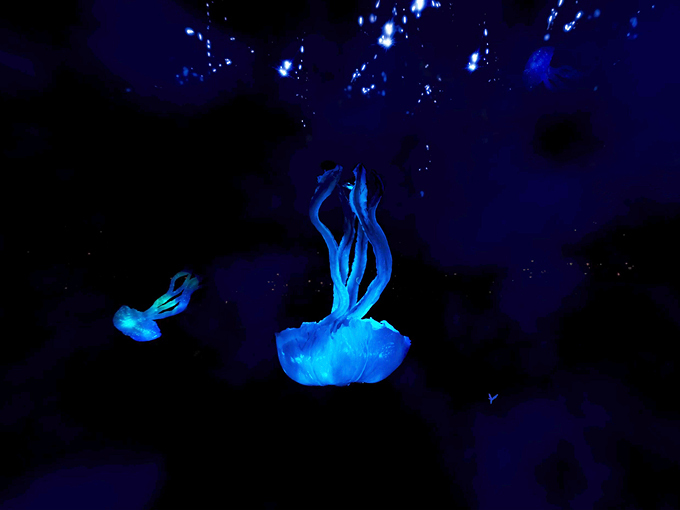 Despite controversy around virtual reality for children, the Canadian film board saw opportunity in making a kids educational VR experience.

Hoping to tap into VR’s ability to merge education and entertainment, the National Film Board of Canada (NFB) is growing its kid-skewing virtual reality offerings with a short film heading to the Annecy International Animation Film Festival next week.

The Orchid and the Bee is one of the Canadian public film producer’s few virtual-reality projects. The five-minute immersive video is also one of its only projects to be aimed at a younger demo of kids 13 and up.

Directed by Frances Adair Mckenzie, produced by Jelena Popović and executive-produced by Michael Fukushima at the NFB’s animations studio, the short film puts viewers in the middle of three different short stories that look at evolution.

Unlike some interactive VR, this is a passive-viewing experience where the story moves from a jellyfish changing its form, to a bee that pollinates a flower and the relationship between humans and pigs. The short features stop-motion animation with modelling clay-made puppets, and the NFB used digital compositing software Nuke to turn it into VR.

Chosen by Annecy as part of the festival’s Official Selection, it’s the only project VR project at the festival that targets kids. Originally planned to be a short film, Mckenzie and Popović decided to pivot to VR after seeing an opportunity to tell the story in a way that was more visually unique, while also making its educational content more engaging for kids, says NFB producer Popović.

“VR was the perfect narrative approach for this film because it answered the question of how do we really immerse viewers into the story,” she says. “Although there are issues with making VR content for kids, it’s a medium that for those who can view it should because it can make learning more exciting and experiential.”

Indeed, educational VR content for kids is a tricky line to walk as there are serious concerns over use of the technology for kids, whose eyes are still developing. At the NFB, all the organization’s work has skewed to tweens at the youngest. (The NFB complies to manufacturing guidelines around age use, a spokesperson said).

Parental skepticism also hampers growth with kids. In recent years, 60% parents were concerned about possible negative health effects from kids using VR, according to Common Sense. However there’s hope for the medium, with 2017 research from Dubit indicating that 70% of kids eight to 15 were interested in experiencing VR, while nearly half (45%) of parents said that VR is appropriate for kids under 13.

So a demand exists and appears to be growing: According to Common Sense, young kids are finding VR content more influential. What’s more, the media monitoring org says virtual reality could help kids connect more with the characters in it, than through ordinary TV.

Although restrictions stop the content from skewing to kids under 13, there’s still a gap for education-based VR content aimed at the kids who can watch it, says Popović. Many of the titles using the medium are action/adventure games, with education missing from the mix.

Popović’s hope is that The Orchid and the Bee will be featured in schools, and along with supplemental materials that teachers can use to educate kids about evolution in a way that truly puts them in the middle of what is their own story.

The NFB has been building its investment in interactive-content in recent years, and some of its existing VR properties have also seen success on the festival and exhibition circuits, including its tween-skewing VR project—and its first foray into interactive virtual reality—Museum of Symmetry. A 2D/3D-animated interactive game allows audiences to explore a colorful and unusual museum without time limits or dead-ends in gameplay. This project was an Official Selection at the Annecy in 2018, and was also named best VR game at the Canadian Screen Awards last year.

Achievements like this show that the industry is just starting to recognize the value of VR for younger audiences, adds Popović. Outside of the NFB’s efforts, kidcos like One Animation and LEGOLAND have made moves into virtual reality in recent years to give audiences new opportunities to connect with brands.

Looking forward, Popović would like to make more tween/teen skewing VR with the hope that projects like hers will start making their way into the classrooms as more teachers start embracing the tech.

“It’s important that we keep creating quality VR content for kids because of how it can blend art, education and entertainment,” she says. “It opens up a new approach to creative education, because we can make content that is backed by facts, but which is also visually exciting to engage kids.”

annecy, Jelena Popović, National Film Board of Canada, NFB, The Orchid and the Bee, VR