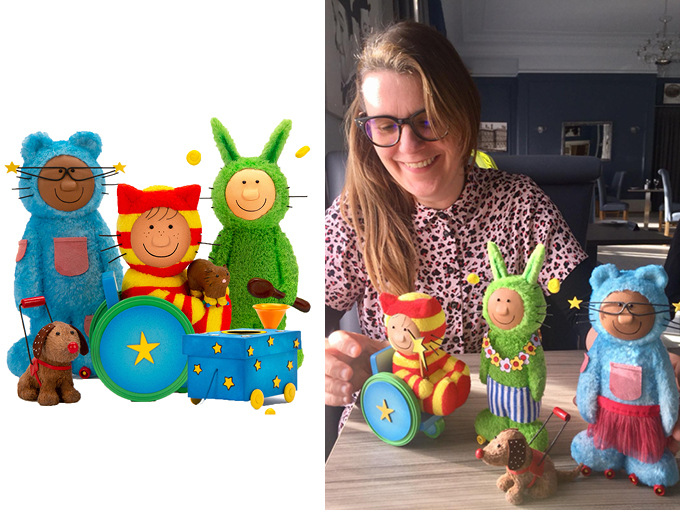 The new property will address the lack of positive disability representation on screen and in toys, says creator and #ToyLikeMe founder Rebecca Atkinson.

Born partially-deaf, UK-based writer Rebecca Atkinson (pictured) never saw herself or anyone like her represented in mainstream media.

The lack of disability representation is a problem that continues to this day, particularly in children’s television. According to the Geena Davis Institute’s “See Jane” report, less than 1% of leading characters in kids TV are depicted with a disability, and when they are, they are portrayed as helpless and in need of rescuing.

Atkinson, who is also registered blind due to partial sight loss five years ago, is hoping to change this mindset and bring positive disability representation into the mainstream with her first children’s brand MixMups. She came up with the idea in 2015 as a freelancer after wrapping an 11-year stint in TV production at BBC Children’s.

Launching in 2021, the IP will feature a 52 x 10-minute stop-motion preschool series produced by Manchester-based Mackinnon & Saunders (Postman Pat), alongside a global licensing and merchandising program helmed by Valerie Fry of London-based Raydar Media (Fifi and the Flowertots).

In addition to the show being led by a disabled creator, each member of the brand’s core creative team has first-hand experience of disability. Atkinson says director Andy Burns (Bob the Builder, Moon and Me) has an autistic son, Raydar managing director Alison Rayson has a son with Down Syndrome, and script editor Debbie McDonald has a daughter with learning disabilities. “There’s always a lot of discussion about how to make disability content, but what often happens is disabled people are only consulted and not actively involved or embedded in the production,” says Atkinson. “With MixMups, our experience brings a level of understanding and commitment to the show, and allows us to tell the stories from the inside out.”

With development funding from the British Film Institute’s Young Audiences Content Fund (YACF), MixMups shines a light on how all children play and solve problems differently, whether they have a disability or not. Two of the series’ main characters have visible disabilities—wheelchair-user Giggle and partially-sighted Pocket—while their third friend, Spin, lives with anxiety. Atkinson, who has tunnel vision, did all of the show’s illustrations. “Although I have a guide dog, I can see fine in the middle,” she says.

In each episode, the characters use a magical dress-up portal in their accessible home to go on costume-filled adventures. Themes include the joy of individuality, friendship and self-sufficiency.

The series also taps into the phenomena of wheelchair fancy dress, where disabled children dress up their wheelchairs on Halloween and on other special occasions with elaborate and colorful cardboard costumes.

In researching disability aesthetics for the show, Atkinson found that about nine out of 12 toy wheelchairs are colored gray and tend to be used by grandparent figures. And if kid characters are in toy wheelchairs, they’re usually found in hospital-based medical sets. “They’re never handled in a fantastical way,” says Atkinson. “They’re only handled in a realistic way because people worry about offending. So designers gravitate back to the idea that wheelchairs are gray, which is a very boring color for children.”

In tandem with the earliest development of MixMups, Atkinson’s awareness of the lack of disability representation in toys led to the creation of #ToyLikeMe, a campaign that called on the global toy industry to create more diverse toys for kids. It went viral in 2015 when Atkinson made over some of her kids’ toys to give them disabilities and posted the photos online. #ToyLikeMe is now an arts-and-play non-profit that influences toyco decisions, works with schools and offers a “Loved by #ToyLikeMe” product endorsement stamp that can be licensed onto toys. Playmobil, Irish doll company Lottie Dolls  UK-based Sequin Art all carry the endorsement. The hope, according to Raydar licensing expert Fry, is for MixMups toys to carry the endorsement, too.

Fry says the brand’s CP program will focus on key toy categories (figurines and playsets, plush, dress-up) and publishing (interactive novelty books), before broadening out in a second phase to incorporate apparel, homewares and back to school items. The program will also expand to live events.

Fry is looking for toy partners that will fully embrace how necessary it is to represent disability within children’s products.

“We are keen to include partners in the development of the characters at the earliest opportunity to ensure that their traits and personalities are properly reflected in the products,” says Fry.

Along with its commercial role, Raydar gives input the scripting and design of the series, and is actively looking for lead broadcast commissions to help secure production finance. Fry wouldn’t divulge the show’s budget or how much development funding came from the YACF.

Though more work needs to be done to address disability representation in kids entertainment, more producers and toycos are actively embracing disability. Some of the newer initiatives include Paper Owl Films’ popular CBeebies show Pablo, which features an autistic lead character and scripts from writers on the spectrum, and Mattel’s first-ever line of Barbie dolls with physical disabilities.