Why the We Bare Bears creator put story artists at the heart of the show, how he shifted strategies for his upcoming feature, and what his plans are for a storyboard-focused prodco in the future.

While studying at CalArts, Daniel Chong (the creator of We Bare Bears) decided the best path forward in animation was to become a storyboard artist, where the jobs were plentiful. Several years later, Chong has created a TV series entirely led and directed by storyboard artists, and as he closes out his We Bare Bears chapter with the new TV feature film titled We Bare Bears The Movie, he is turning his focus once more to storyboard artists and how he can promote their careers.

Chong started at a training program at Disney Feature Animation, and worked on animated feature Bolt, Illumination’s Despicable Me 2 and Pixar’s Inside Out and Cars 2. While he worked on the features, he started his own side comic, which would eventually morph into his first TV gig. We Bare Bears was a creative outlet for the creative, who found the years-long process of making features stringent.

The original comic broke all of the rules of writing a comic strip. “I didn’t know where the comic was going, and I just kind of wrote whatever weird thing came to my head. It was liberating.” No one actually read the story, he admits, but he parlayed an existing relationship with Cartoon Network—where he worked on PowerPuff Girls—into a TV pitch.

He was given free rein over the series, which ran for four seasons and 140 episodes. “It’s rare for sure, I’ve seen the other end of it and I know how it can go wrong, how you can get micromanaged, and this was great,” says Chong.

The series took a unique approach to story building: Rather than a complete script, Chong tasked writers to create a rough outline, which storyboard artists used to create the finished product, effectively “improvising” the scenes.

“They took the structure, but kind of just seeing where it goes as they storyboarded it. To me, that was a really nice compromise in just getting the freedom of the writing that I really liked in the comic into the show,” says Chong. The strategy wasn’t without its faults: A dearth of storyboard artists, generally, meant finding those who could both write and improvise, unique skills not all storyboarder possess, meant he sometimes struggled.

“I’ve worked with so many artists, and not every one can give you good dialogue and can make up something from very little information,” says Chong.

We Bare Bears’ improvisational structure also meant it struggled with scale, he says. While most toons limit their settings to just a few locations to save time and money, the improvisational nature of We Bare Bears meant that artists’ imaginations were given free range, and the results was numerous new sets, backgrounds and worlds for the characters to explore…at least on paper. Despite the grand ambitions, many ideas had to be shelved in the interest of delivering the show on time.

With a longer run time and a bigger budget, the Cartoon Network Studios We Bare Bears The Movie (premiering June 30 on iTunes, Google Play and Amazon for US$14.99) didn’t face the same constraints. Chong says the team was able create a complicated and overblown and cinematic of a world. Every element they were denied in the process of making the show, was now able to be incorporated into this TV feature film. 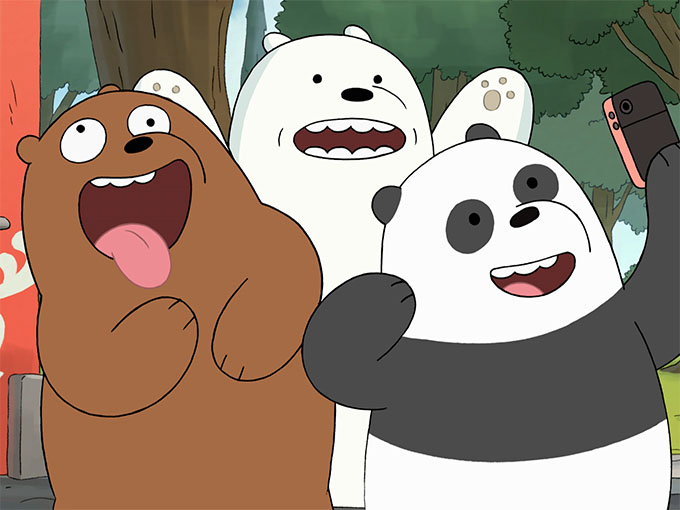 While the 11-minute show could be, to an extent, improvised on the fly, the movie had to have a more concrete script in place. But, with the same crew from the original four-season series run, they were still able to keep storyboarding at the heart of the process, says Chong. He wouldn’t recommend creating a storyboard-driven film to anyone else though.

“A lot of [our ability to pull it off] has to do with just the chemistry since we all have been working together for so long,” says Chong. “We started with an outline, and whenever we had sequences that were really hard to break and we had trouble cracking them, our writers would write a little bit of the script, just to help further it along.” It was the right balance, he adds. “When shows are writer-based, there is a tendency for things to get talky. When you have the artist merging with the writing, it becomes a nice combination of a visual medium, and uses animation a little bit better.”

Sometime in the future, Chong’s dream is to setup a production company that enables storyboard artists to make their own project. “I want to be the sort of person that can help enable them to kind of see their vision come to life,” says Chong. “My endgame would be to be able to help shepherd other projects, multiple projects at the same time and help other people get the experiences that I did.”