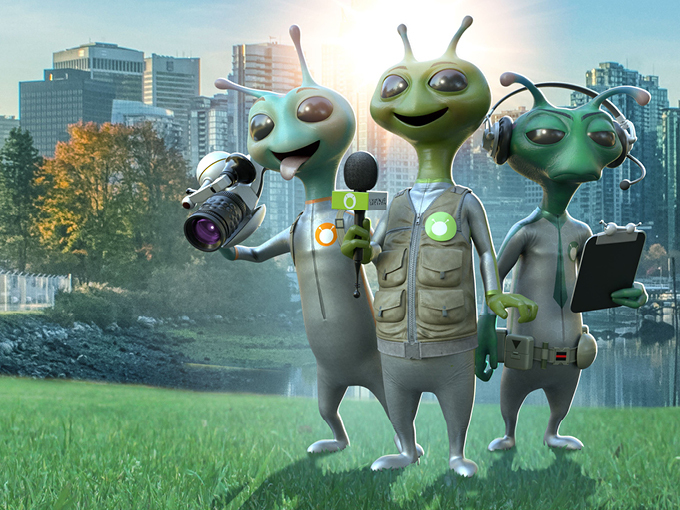 eOne’s new show to take off with Netflix

Olivier Dumont weighs in on why the SVOD was the right partner for the studio's space-themed family series Alien TV.

Netflix is making space for the new family show Alien TV. Co-produced by Entertainment One and Australia’s Pop Family Entertainment, the slapstick series centers on an alien television crew sent to Earth to gather information about the planet’s strange inhabitants.

The 26 x half-hour hybrid series combines live-action imagery with CG animation, and targets kids ages six to 11 and their families.

Alien TV will premiere on Australia’s free-to-air Nine Network this month and is set to bow on Netflix later this summer. Nine Network commissioned the series in Australia, and the non-dialogue show was produced with financial support from Create NSW.

“Because the show is pushing the envelope a bit—there is some potty humor, for example—partnering with Netflix allowed for more creative freedom,” says Olivier Dumont, eOne’s president of family brands.

According to Dumont, creating a comedy series in collaboration with multiple networks can be difficult, because so many different sensibilities need to be taken into account. Because Alien TV involves fewer contributing voices, Dumont believes the voice and tone of the show were allowed to shine through. One request Netflix did have, however, was that the aliens visit different parts of the world. As a result, several episodes explore specific countries and feature famous international landmarks.

Production was well under way before the COVID-19 pandemic resulted in teams around the world working from home, which meant the show wasn’t delayed by the global lockdown. And because Alien TV features very little dialogue, it means complications around remote voice recording won’t affect the launch.

eOne will support the premiere with marketing and social media. There are, however, currently no plans to bow consumer products inspired by the show.

“With a comedy, you need to see how it goes. If kids and their families connect with Alien TV there will be a second season, and then we can examine licensing. The show needs to do the work,” Dumont says.

But he has faith the series will connect with families, as he believes kids will feel empowered when they understand the everyday situations the aliens find so confusing.

“It puts them in the know.”