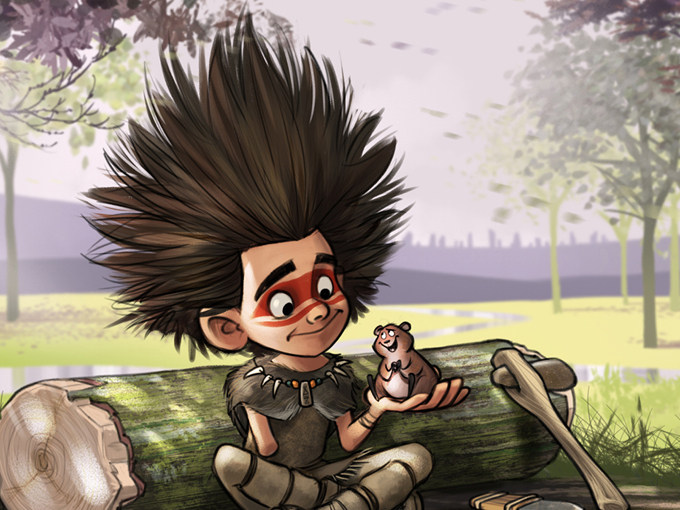 After landing US$66,000 in development funding, the studio is looking for co-pro partners to bring its neolithic film to market, says co-founder Tim Bryans.

Belfast-based ALT Animation is expanding its pipeline with its first foray into feature films Lugi–The Brodgar Boy (pictured). Last week, the prodco received around US$66,000 in development funding from Creative Europe on the project.

The company, which is providing service work on preschool series Mimi’s World for Channel 5′s Milkshake!, had always planned to get into original IPs since it launched four years ago, says Tim Bryans, managing director and co-founder of ALT.

“We planned to work for the first three of four years on service work and building a team of talented creators before we made the big step into feature film production,” says Bryans. “Now we’re four-years-old, and this money is a great stepping stone that gives us the financial freedom to get started on this project sooner, instead of waiting until we secured financing from other deals.”

ALT previously applied for the development funding in 2019, but didn’t make the cut. Based on feedback from the funding body, ALT shifted its focus so the film targeted European audiences, and had stronger distribution and financing strategies in place, says Bryans.

Inspired by the ancient history of Orkney, a series of small islands off the coast of Scotland, the family-friendly feature is set in Neolithic times and follows the adventures of a young boy—who has only one arm—as he quests to unite his people to defeat the evil forces that threaten his world. ALT aims to produce the film with a budget of US$6.6 million and US$7.7 million, and is looking for European co-production partners, as well as international distributors and broadcasters to join.

ALT is in pre-production on the film, working on developing designs and the scripts. The plan is to start production in 2022, pitch it at annual market Cartoon Movie in France that year, and then deliver the film by 2023.

Writer and illustrator Alex Leonard created the property, and potential partner studios and distributors have responded positively to the story and concept art that ALT has shared, Bryans adds.

Adjusting its pipeline to handle a feature film will be a big shift for the company, but they’re confident the experience of bringing TV projects to the screen, including the educational shorts, Keeping Up With the Calculations for BBC, will help the pivot, says Bryans.

Outside of the new film, ALT is building up its slate with a number of in-development projects using the Creative Europe funding, including 2D-animated Wow Cow. Co-developed with UK prodco Avalon Television, the comedy is about an energetic bovine talk show host who chats with everything from a sentient volcano to a talking washing machine. ALT is also continuing to provide service work on on Adastra Development’s Mimi’s World,  a 52-episode series, which received funding from the BFI-administered Young Audiences Content Fund, last November.

Looking to the future, Bryans wants to build out a slate of animated features all with budgets under US$10 million. He sees Creative Europe’s development funding as the first stepping stone to achieving that, he says.

“The hope is that this is the start of us growing out our projects, and giving us the opportunity to tap into the talent and market of those developing animated features in Europe.”