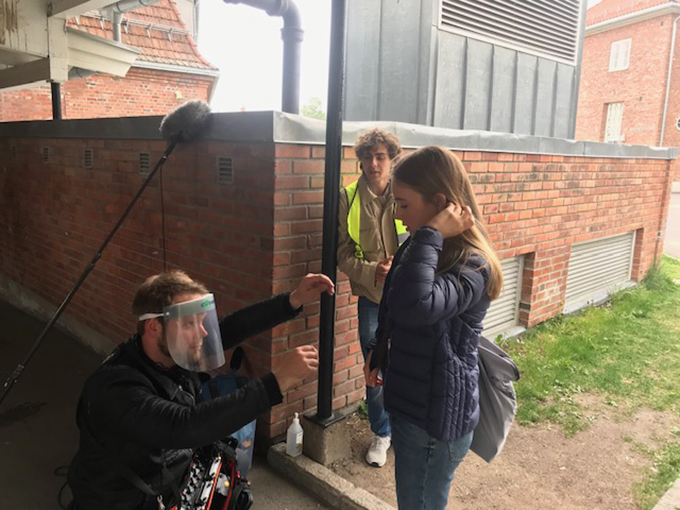 Temp checks, an on-site nurse, and more outdoor scenes—producer Benedikte Tollefsen-Minos talks about safely filming The Class in a pandemic.

It’s hard to imagine a tween series with no awkward first kisses, but this is exactly the scenario facing the producers of The Class (Klassen), a top-rated localized drama from Norwegian kids channel NRK Super that’s one of the first live-action children’s programs in the world to begin production during the pandemic.

According to NRK Super’s executive fiction producer Benedikte Tollefsen-Minos, no lip-locking is among the show’s many new health and safety rules put in place to protect actors from COVID-19 infection.

“Though the kids are required to stay a meter apart when they aren’t shooting, they can still touch each other in scenes [think playful bumping or nudging], but hands on faces and kissing is prohibited,” says Tollefsen-Minos. “The actors must also maintain a two-meter distance from crew members, who need to keep the same distance away from each other, and masks are enforced only if crew need to work within two meters of the actors for things like mic adjustments.”

Production on the show’s 60 x 10-minute third season began in Oslo on the weekend of May 23 at the school where the first two seasons were filmed. The filming started just eight days after NRK approved the shooting schedule. Production is now gearing up for an intensive, two-month shoot beginning June 27 that will further the show’s third season and complete a 52 x 11-minute fourth season, too. (The series is based on a long-running school life program of the same name by Danish kids channel DR Ultra.)

Though the first days on set were crucial for the actors and crew to get accustomed to the new COVID-19 guidelines, Tollefsen-Minos says one of the hardest parts was the uncertainty over whether the team would be able to shoot in the summer months, as the production relies on the summer shoot for access to its kid actors.

For The Class, Tollefsen-Minos says other key changes include the hiring of an infection control officer, script re-writes to accommodate exterior locations, working in small 10-person teams, daily temperature checks with a nurse, as well as new hand-washing and set-cleaning routines.

Tollefsen-Minos says potential health risks are a concern, because they’re shooting a live-action show during the crisis, but the risks are low because her team is doing everything it can to comply with regulations. She notes that she hasn’t received many questions from the actors or their parents about the new filming restrictions because they’ve been given detailed guidelines in emails prior to May 23. A special parents meeting was also held the day before the shoot to go over any potential concerns.

As for the additional costs of new hires and personal protective equipment, Tollefsen-Minos says she can’t put a number on it yet, but the producers have carved out funds in the show’s budget for expenses related to COVID-19. In terms of insurance, she says an extra contract with NRK is in the works. “In June, we have to land a new agreement to help us with insurance because not many insurance companies will help us with COVID-19 right now,” she says.

To date, Norway has fared better than many countries, with just 8,383 COVID-19 cases and 236 deaths as a result of the pandemic. The country’s audiovisual sector pressed pause when lockdown measures were enforced on March 12, but in early April Norway began loosening restrictions and cleared select businesses, kindergartens and primary schools to re-open under social distancing and additional health checks. Though travel restrictions to foreigners entering Norway are still in place until further notice, NRK officially resumed its local drama production on April 28.

The majority of the industry’s filming requirements were set on April 20 by the Norwegian Film Industry Council. According to the Council’s website, the guidelines are based on current recommendations from Norway’s Directorate of Health, the Public Health Institute and the Labor Inspection Authority, and will be updated continuously as required.

Tune in tomorrow for part two of our series on live-action summer filming strategies.