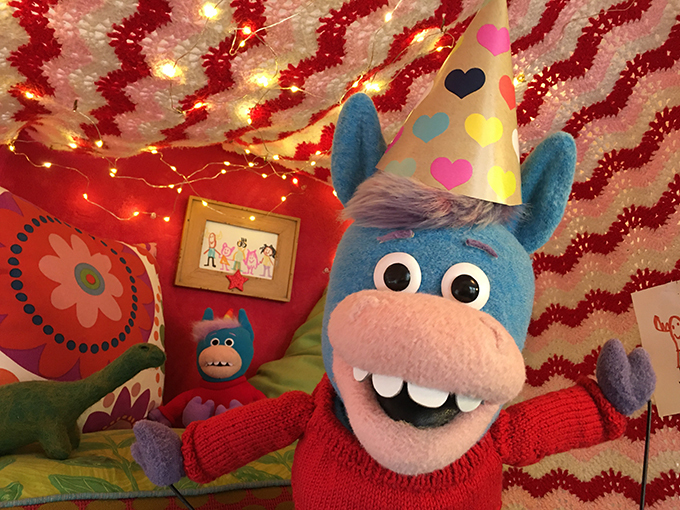 The pubcaster turned around fresh stay-at-home content in less than a week. Success rested on finding the right series to pivot, says Marie McCann.

In less than a week, Canadian pubcaster CBC Kids’ in house production team took its puppet show our of the studio and into the hosts and puppeteers’s homes. The short-form content now serves as interstitials on the channels’ linear and digital platforms, and aims to reflect kids current stuck-at-home realities, says senior director of children’s content Marie McCann.

The new shorts (one to two minutes), titled Studio K from Home, star the team’s live-action hosts and an assortment of puppets such as Mr. Orlando the Moose (Todd Doldersum) and Gary the Unicorn (pictured, played by Jason Hopley). The puppets teach kids new games to play, and show them ways to keep themselves and others healthy during the pandemic (think bumping elbows instead of giving high-fives). Shot entirely by the puppeteers, the first of the videos launched last month on its linear channel, its SVOD CBC Gem and the CBC Kids YouTube channel (63,800 subscribers).

Tapping into the insight that showcasing the team at home adds immediacy and relevancy to content, CBC Kids replaced its existing inventory of interstitials, which had been made up of Studio K hosts as well as other IPs, says McCann.

As calls for lockdowns in Canada grew, CBC was in chats with pubcasters in Europe about how they were helping kids, says McCann. She is especially motivated by the work Italy’s Rai had done rolling out new educational content to support kids.

After ensuring its cast were properly set up at home, CBC sent its puppeteers and show hosts home on March 16 ready to film. While the team faced some technical difficulties (such as ensuring properly-charged phones and network bandwidth that could accomodate large video file transfers, the talent kept in touch with the crew, and a week after starting to work remotely—March 23 to be exact—the first videos began airing between content on CBC’s linear channel. For comparison, traditional interstitials take between four to six weeks to put together, says McCann.

Studio K was an ideal series to shift to a work-from-home vibe, as the property’s pre-pandemic style had always followed a more personal vlog format, says McCann. But for other studios looking to do something similar, McCann cautions that turning around videos in a week was only possible because the team was determined to get content out quickly, and keeping up such a tight schedule could eventually take a toll on everyone involved.

The videos have helped drive viewership across CBC Gem and YouTube. On CBC Gem, the videos (alongside the other content on its “Staying Home, Staying Healthy” category) were the ninth-most viewed segment of children’s content between April 2 and April 23, according to CBC Kids. On YouTube meanwhile, its channel has seen a 75% increase in weekly watch time, and a 68% increase in overall views between March 8 and April 12.

So far Studio K has created 64 segments for broadcast and online, including four musical videos and user-generated content pieces, with 27 more clips in post-production, as well as 15 more being shot this week.

The pubcaster also has plans to keep making live-action content from home as long as they need to, says McCann.

Outside of the new videos, CBC Kids has been steadily building up its live-action kids offerings across categories during the pandemic. It teamed up with CBC Podcasts to create the 21 x four-minute podcast series The Story Store Shorties hosted by the same puppets who star in the interstitials. That series is also taking off with kids, and its average weekly downloads between March 29 and April 25 are up 95% compared to when it launched last year (October to November 2019), according to CBC. It’s also rolled out new content, including Facebook Live videos with Studio K’s human actors, who sing, play games and make music for preschoolers.

“It’s our job to reflect Canadian children’s realities, and to keep them informed with relevant up-to-date messaging,” says McCann. “Things are going to be different for kids after this, and we’re already thinking about how to communicate all the possible changes to them.”