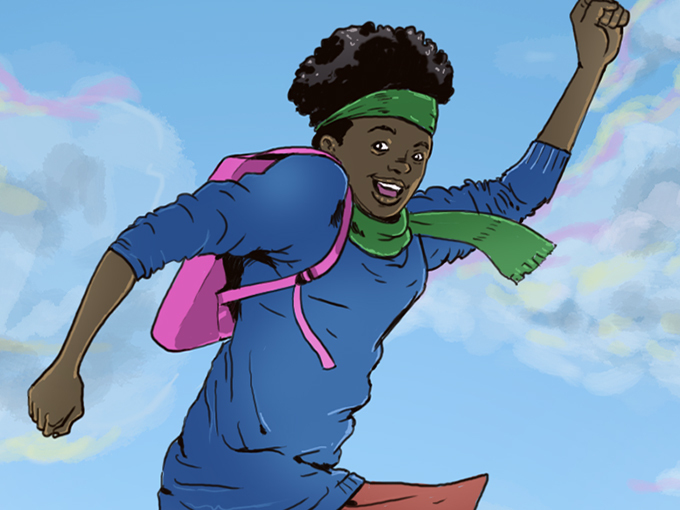 The burgeoning Nigerian studio pivoted its first IP into a comic book to catch the eyes of broadcasters and distributors during the pandemic, says CEO Augustine Osas.

Amid lockdowns and the continued spread of COVID-19, Nigerian animation studio Guereza is pivoting into comic books for the first time as a quick way to raise money for its animation work, while also trying to grow awareness for the quality of what it can produce.

“We wanted something that we could get out to kids quickly, and we were able to make the comic in three days, compared to the weeks it would take us to make an animation,” says Guereza’s CEO Augustine Osas. “It’s also easier for us to distribute, and for kids to access a digital comic, since children don’t need as strong an internet connection, or as advanced of a device to access it compared to watching videos.”

The new studio just launched in July 2019 and ahead of the pandemic crisis, Guereza was working on building a slate of animated kids content focused on African stories, and folklore. COVID-19 changed its plans, but it does hope to keep telling stories that are relevant to Africans with the goal of getting a global audience for its shows, says Osas.

The animated shorts producer (Ijapa: The Lazy Tortoise) stepped into the world of comics with Adventures of Adunni and Lazerboy: Stopping the Spread, and to give the title increased relevancy, it’s focusing the first issue on the pandemic, says Osas.

The five-page comic—the first in a planned series for tweens and teens—launched in early April and follows kids who learn that their school is closed because of the virus, and it teaches strategies like washing your hands, sneezing into your elbow, and using hand sanitizer, which kids can use to protect themselves. It then tracks a teenage girl who helps a young superhero regain his confidence to save the town from a giant spider.

This first issue of The Adventures of Adunni and Lazerboy is free online through Startup Africa, and the studio will monetize the brand by selling subsequent issues in print and digital forms on Amazon and digital publisher Okada Books. Osas is hopeful that the comics will drive more deals for the studio as other companies see the quality of work the burgeoning studio can do.

Originally developed last month, the comic’s plot shifted slightly from a focus on action/adventure, to one that helped inform kids about the pandemic. Not only does that help provide relevant hygiene info, but it keeps the story relevant, says Osas. The shift also helped get the IP in front of distribution partners and organizations looking for timely content, he says.

The studio will continue making comics based on this IP even after the pandemic passes, and it already has six more issues planned, which will roll out on a weekly basis. The next few issues will also address coronavirus, before broadening out to focus on the relationship between the two characters working together to stop evil, and learning about teamwork, inclusion and determination, says Osas.

To distribute its comic, Guereza partnered with Nigerian publisher Mapleleaf Press, and is producing it through a grant from Africa CDC, German business development firm The German Agency for International Cooperation and Nigerian tech company CChub. The studio is translating the comic into French, Portuguese, and Arabic to reach audiences across Africa.

Guereza teamed up with Tanzanian-based edutainment platform Ubongo to make digital and print copies available to kids in East Africa. Ubongo, which has more than 16 million monthly users, will also be translating the story to Swahili. Additionally, to support marginalized communities, Guereza partnered with Canadian-headquartered NGO Under the Same Sun Foundation to help distribute it to kids in Tanzania who were born with albinism. The comic has also been approved by the African Union and Africa CDC to be used across Africa to educate kids about the pandemic, says Osas.

The title is entering the market at a tricky time for kids comics—only 39% of kids five to 16 in the UK read them, according to market research firm Childwise. Despite this, the industry still sees comics as a viable way to reach kids during the COVID-19 school shutdowns, with many creators rolling out digital comics, including NPR’s editor Malaka Gharib, Canadian illustrator Elise Gravel, the Singapore Population Health Improvement Center, and Sesame Workshop.

The numbers also don’t intimidate Osas, he says. The Adventures of Adunni and Lazerboy has already drawn distribution partners, and as the series continues he’s hopeful that the comics will help build Guereza’s clout in the industry, and give it an IP it can work on monetizing through new partnerships.

Outside of comics, the studio is in talks with international financiers about developing an animated property for kids six to 13, and he hopes the new comic will help show potential partners what the company can do, says Osas.