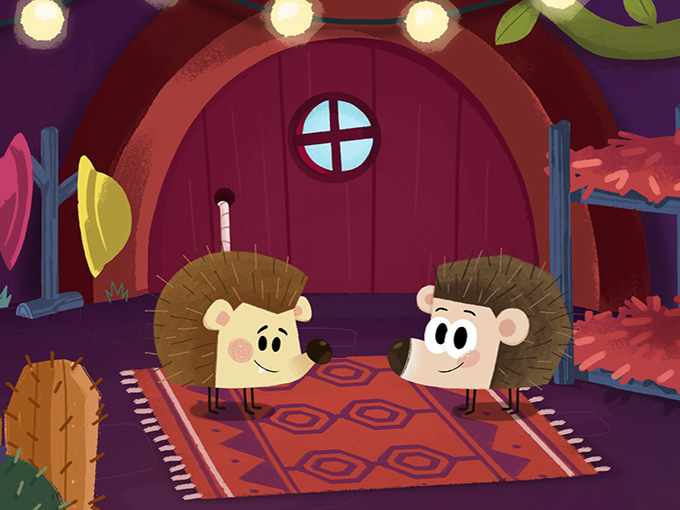 The prodco is launching a spinoff to get on broadcasters' radars and support kids with a show that tackles their pandemic anxiety, says Lindsey Adams.

To drum up attention for Pin and Nettie, as well as better reflect kids’ lives during the pandemic, Dublin’s Daily Madness Production is launching a spin-off for its still in-development series on YouTube. The 13- x three minute shorts began appearing on the AVOD last week and feature the cartoon characters—a pair of shy hedgehogs—as they live their lives on lockdown.

The first episode is titled Together and Safe, and Daily Madness will release new episodes of the 2D-animated series on a weekly basis.

Originally pitched at Cartoon Forum last year, the 26 x five-minute Pins and Nettie targets preschoolers, and follows the shy mammals as they go on adventures. The studio is still looking for broadcast and distribution partners, but instead of waiting for the deals to be signed, studio founder Lindsey Adams wanted to draw eyeballs to the brand while home viewership. With views on YouTube jumping 50% in January and another 50% in February, according to digital rights management firm Aux Mode, the studio opted for the Google-owned platform as its spinoff launch channel. YouTube provides Daily Madness with the widest possible audience, particularly with families who may be experiencing financial difficulties and aren’t able to pay for streaming services during the pandemic, Adams says.

She says the idea came to her for mini episode at the end of March, and reached out to the show’s writers Shannon George (Gigantosaurus, Blue’s Clues) and Karen Leavitt (Sesame Street and Blue’s Clues), who spent a weekend writing up scripts with simple stories that show the hedgehogs playing different games at home. The storylines typically play out with the hedgehogs dealing with worry, and anxiety around being on lockdown, and then overcoming those difficult emotions by finding ways to talk about their feelings, and having fun together.

There’s no secret to making content for preschoolers at this time, but producers need to be empathetic and sensitive because it’s a scary time for children, says Adams.

“We’re all worried about the pandemic and that worry carries down to kids,” she says. “Kids pick up on crisis and we wanted to confront their fears.”

Beyond launching uplifting, fun content at this dark time, releasing the short videos during the pandemic also doubles as an opportunity to show the industry the quality of work the studio can produce…and quickly, says Adams. Daily Madness has been working on the original series for about a year, and had much of the art and rigs prepared, which allowed it to quickly produce the first of the short clips within three weeks.

“A lot of broadcasters are probably thinking about what content to pick up once things settle down,” she says. “Getting our capabilities on broadcasters’ radars now could set us up to get the original series picked up and launch when they are ready.”

Daily Madness could continue producing the short videos until the lockdown lifts, but is predicting that by the time it launches the 13 episodes, the world will have returned to some degree of normalcy, says Adams.