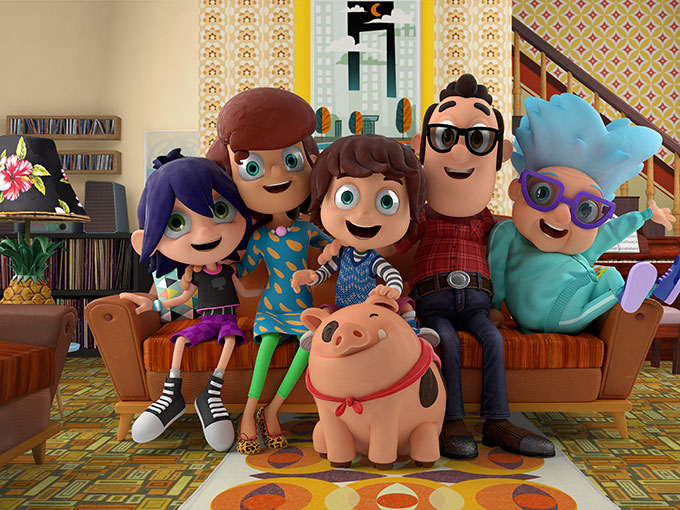 The local kids TV industry could be "decimated" if they don't band together, says Jenny Buckland, CEO of the Australian Children's TV Foundation.

In an effort to support local TV, the Australian government has suspended all kids content quotas for broadcasters until the end of 2020. In particular, broadcasters have been hard hit by declining ad revenue during COVID-19.

Prior to the change, broadcasters were required to screen a combined total of at least 260 hours of children’s programming (defined as programs for kids other than preschoolers) and at least 130 hours of preschool programming per year, according to government body Screen Australia. The content could come from any source, so long as 55% of the content aired is Australian.

There were also specific expectations for children’s drama, and broadcaster’s had to screen at least 96 hours of first-release Australian kids content over a three year period, at least 25 hours per year, and at least eight hours of repeat kids TV per year.

The requirement for 55% Australian content overall is staying, but in addition to the suspension of kids content quotas, Australian drama and documentary obligations for commercial TV broadcasting licensees have also been suspended until the end of 2020.

The shift isn’t sitting well with kids TV producers who rely on these quotas to get commissions and get shows aired.

“Clearly the pressure we’re all under from COVID-19 is unprecedented, so to see this sudden hiatus announced without an alternative funding model in place feels like the government is throwing the broadcasters a lifeline and leaving kids producers to sink,” says Patrick Egerton, a partner at animation studio Cheeky Little Media. “This takes [some] of our free-to-air broadcasters completely out of the mix, and leaves producers with the ABC as the only door to knock on for potential license fees for Australia.”

Egerton, whose prodco has made kids shows Kangaroo Beach and Kazoops (pictured), sees the decision as short sighted, because animation studios are continuing to employ people and maintain productions due to the quotas. Suspending them could potentially axe productions that might have had international financing in place, and otherwise could have been greenlit, he says.

In place of these quotas, the government has rolled out a 100% tax rebate for commercial TV and radio broadcasters for the next 12 months, which translates to US$25.8 million in tax relief for broadcasters, backdated to start February 14. The rebate is meant to offset to the “sharp downturn” in advertising revenue, which is affecting the operating revenue of commercial broadcasters, according to the Australian government.

The government is also launching the Public Interest News Gathering Fund—a US$31.5 million program to prop up broadcasters and news outlets public journalism efforts—as well as US$3.1 million specifically for small and regional news outlets from its new Regional and Small Publishers Innovation Fund. (Screen Australia did offer financial aid for producers: it has upped the budget allocation of its Story Development: Premium fund to US$2.1 million for 2019/20, from US$894,000 in 2018/19. The extra financing will target higher-budget productions that are nearly production-ready with existing market interest, as well as episodic scripted drama, film projects and online productions.)

The sudden support for journalism has driven ViacomCBS-owned broadcaster Network 10 to increase its focus on news gathering and dissemination, according to a spokesperson. Audiences have responded well to the change, and its led to increased ratings, but the network is still committed to kids content, the spokesperson adds.

Recently, to support kids and families stuck at home, the network increased its kids content across channels to six hours a day up from three.

Although the quota suspensions might only last a year, the shift could be devastating to the Australian kids industry in the long-term, says Jenny Buckland, the CEO of nonprofit children’s media org Australian Children’s Television Foundation.

“It’s being referred to as a temporary suspension, but there’s huge concern about where things are headed,” says Buckland. “In the kids space, quite a lot of the content the networks had commissioned is animated and producers had moved their workforce to a working-from-home model, not an easy feat, so it will be devastating if they can’t keep their workflow and cashflows going.”

Looking to the future the government may extend the suspension beyond 2020 if required, and plans to work with the industry over the next two months to “further explore the ongoing issues facing the media and screen production sectors,” according to its press release on the suspension.

The Australian kids TV industry has to band together now to argue the case for local kids content, or the industry could be at risk, says Buckland.

“It’s true that production on many shows has had to be postponed due to the social distancing rules, but it’s disappointing that the 2020 quota requirements are being suspended, because a lot of the shows for this year are already delivered,” she says. “We’re going to need to articulate the case for local content, and especially Australian children’s content, very persuasively, or this industry is going to be decimated. It is really high stakes now.”

The change could have a major effect on many studios that are already struggling to continue production under COVID-19 restrictions, according to Alicia Rackett, the producer at Blue Rocket Productions.

“It’s particularly frustrating that much needed production activity that could have continued through this period will be jeopardized by this decision,” she says.

Rackett is also disappointed that the country’s animation industry, which has quickly made the move to work remotely and continue making kids TV, has received no recognition from the government that made its decision without consulting the creators, she adds.

The full effect of the suspension won’t be known for some time, and companies need to make their concerns evident to the government because the changes are endangering the country’s entire industry, says Stefan Wernik,the founder and director at Armchair Productions (Best Furry Friends, Minibeast Heroes).

“While I understand there’s a drop in ad revenue for commercial channels, it lacks foresight that quotas have been cut without some definite form of backup funding,” says Wernik. “It really limits producers’ options at a time when many are already struggling.”

Wernik has already started receiving a number of emails from freelancers looking for work as their opportunities are suddenly limited, he adds.

Freelancers expect to be hit hard by the fallout of the change as the chances to work on kids’ TV and pitch shows shrinks, says Kangaroo Beach creator Tim Bain.

“The news is devastating,” says Bain. “I continue to write for international productions–but losing Australian commercial networks will leave a giant hole in future freelance writing work. I’m hoping the government will require content quotas for SVODs to level the playing field and offer greater opportunity to make Aussie stories.”

This article was originally published April 16 and was updated April 17 to reflect additional comments from Australian kids producers.