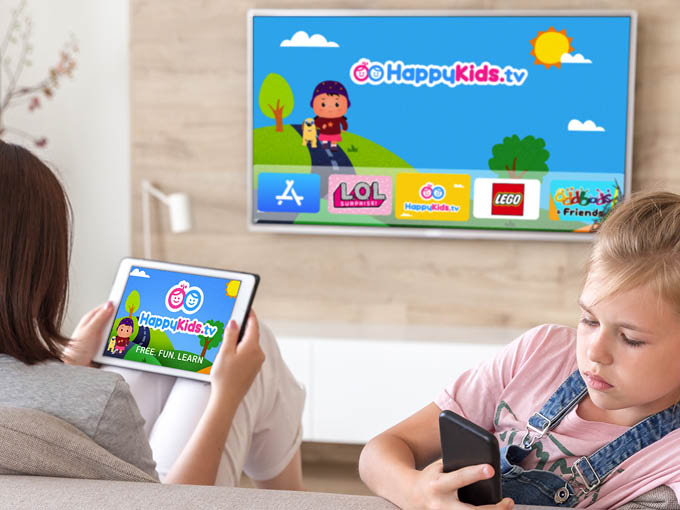 MGA, Genius Brands and Pocket.watch shed light on why direct-to-consumer OTT platforms, which offer a rapidly growing audience and a curated ad-supported ecosystem, are suddenly so appealing.

The argument that the kids TV industry is in a state of flux has been so frequently repeated at industry events and in the news over the past five years, the phrase is dipping into the world of cliché—but it remains true.

According to Nielsen, Nickelodeon’s US ratings dropped to an average of 736,000 in 2019, down from 1.3 million in 2015. Cartoon Network’s dipped to 355,000, from 1.06 million, and Disney Channels are at 410,000, down from 1.23 million. These behemoth brands used to serve as the gatekeepers of what kids watched. But when this slip began to take hold, a lot of people turned to YouTube, which worked for awhile.

Now, YouTube is having its own problems following a landmark fine from the US Federal Trade Commission and the New York Attorney General. YouTube shut off ads for kids content, hitting a lot of kids channels hard, including AVOD network WildBrain Spark. In its most recent Q2 financial report, the company reported a 40% year-over-year decrease in revenue since the change was introduced in January. And WildBrain Spark expects AVOD revenues will continue to slide over the remaining two quarters of the fiscal year.

OTT branded channels, quietly waiting in the wings, are poised to fill this growing white space.

Setting aside cost and discoverability issues for a moment, OTT channels offer an opportunity for kids content distribution because the industry can capitalize on an audience already flocking to the platform. With OTT, producers can build a brand in an environment where the ads and content are customizable—allowing producers to maintain control of their rights.

OTT, or over-the-top, is a broad category that covers all forms of streaming services offered directly to viewers through the internet. OTT bypasses cable, broadcast and satellite television platforms that usually control content distribution.

(It should be noted, however, that as linear ratings continue to slip, several traditional players are reportedly looking to buy these services and get in the game.) 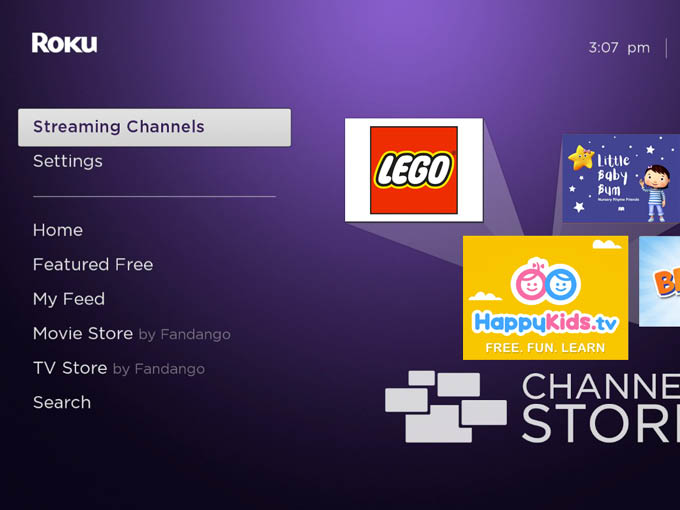 A few platforms allow producers and distributors to create and disseminate their own branded channels, including Amazon Prime Channels, Amazon Fire, Apple TV, Roku and Xumo (which was just purchased by Comcast). Like a YouTube channel, producers and distributors are able to upload whatever content they want to a branded channel, where it lives as a content hub for a single IP or an entire body of work. These channels can be accessed through a web browser or a device like an Amazon Fire stick or Roku box, or simply by buying a connected TV that offers this OTT software. Each channel decides whether or not to run ads. Many of the OTT channels are from linear content providers, like Showtime or PBS, but there is a growing contingent of others led by producers and distributors.

The reach of OTT branded channels is growing as the providers expand their household penetration. Amazon Prime is up to 100 million US subscribers as of January, according to data from Consumer Intelligence Research Partners. (Of that number, only Amazon is sure exactly how many people are buying products versus watching content.)

Roku, meanwhile, hit 37 million active accounts in February, according to its own earnings report. Those figures continue to climb—especially for the ad-based channels that don’t require a subscription.

“With the proliferation of subscription-based streaming services, many families are saying, ‘We’ve cut the cord, and we’re only going to take on a couple of subscriptions. How are we filling some of these other areas?’” says David Di Lorenzo, head of kids and family at OTT distribution specialist Future Today. “Families are always going to look for more free content, and kids don’t mind watching advertising.”

As the race to launch new streaming services continues, most research shows people will only pay for three or four subscription services—suggesting that the smaller players will be left out. The OTT branded channel distribution model offers a way into homes without going through those gatekeepers. “It’s an opportunity to get in front of more consumers because these are consumer-facing brands looking for audience reach,” says Di Lorenzo. 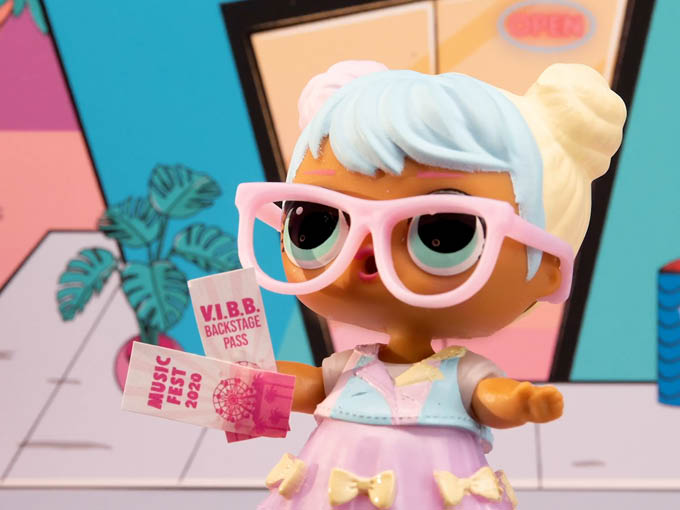 MGA adds new videos to its branded channels every week.

MGA Entertainment launched its first OTT channels in April 2019 in partnership with Future Today and SuperAwesome. L.O.L. Surprise! content is now on Roku, Apple TV and Amazon Fire, with 60 videos from the brand’s YouTube channel. MGA has expanded its offering by adding other IPs, and new content weekly.

Unlike YouTube, the OTT branded channels on these platforms act as contained ecosystems. The user only leaves if they deliberately decide to find something else to watch—there’s no auto-play to usher viewers to a new channel.

OTT platforms have the added benefit of boosting smaller IPs that might get lost on a large platform like YouTube. And that closed circuit tends to mean longer watch times, says Anne Parducci, chief content officer at MGA Entertainment.

Yet despite the benefits, Parducci doesn’t recommend anyone launch new IPs on these OTT branded channels because there are so many competitors to choose from—new brands will be lost in the crowd. (Roku, for example, has 3,000 channels, and around 600 are dedicated to kids content.) Instead, Parducci suggests the platforms can be used to promote an existing brand.

“There’s a cost to [putting content on OTT branded channels], so you really have to be smart about what your objective is,” she says.

“We’re primarily a toy company. We are actively out there promoting our toys and creating engaging content to expand into brands with L&M.”

In line with that objective, MGA isn’t looking to make a lot of money from OTT channels, so all of its videos launched without advertising for the first six months, and have only recently become ad-supported. “As TV audiences decline and OTT grows, we’re consistently seeing growth every month in the number of people who install the app onto their televisions. We’re seeing consistent growth in views and the watch time is pretty long, so it’s significantly sticky,” says Parducci. 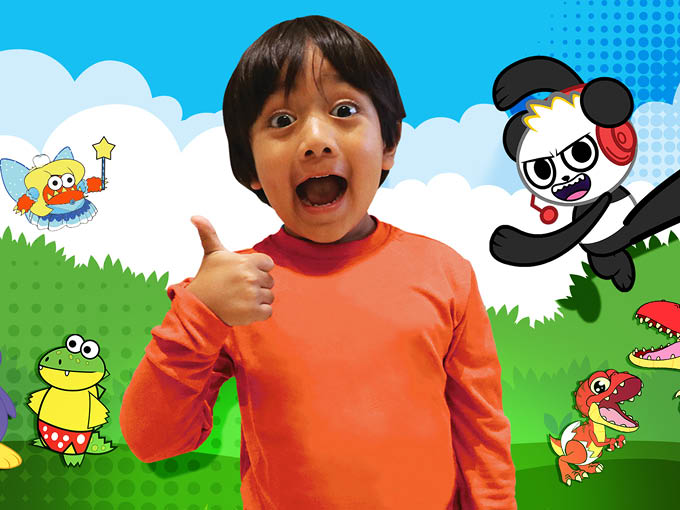 Pocket.watch saw those linear declines and was looking for ways to diversify beyond YouTube. These OTT channels seemed like a good solution to the problem, which is why it released content on the Roku kids and family channel, as well as on Samsung TV Plus and Xumo.

Rather than investing a lot of money in creating new content for OTT, the LA-based company adapted existing YouTube content by taking it off the platform, removing anything that would make it seem native to YouTube (such as telling kids to “like and subscribe” or “comment down below”). The initial repackaging was expensive, but it’s manageable at scale, says David Williams, SVP and GM of channels at Pocket.watch.

There’s definitely a cost, and it’s not trivial,” says Williams. “But once a package of content has been optimized for off-YouTube distribution, we’re motivated to put it on as many platforms as we can.”

A main push to be on OTT and create a branded channel is simply to be everywhere that kids are. So as more kids use Apple TV or Amazon Fire, Pocket.watch wants to ensure they find Ryan Toys Reviews (and its other creators) everywhere.

And since, for the most part, these branded channels need to be viewed on an actual TV, it provides an easier path into co-viewing. If kids are watching something on a big-screen TV in the living room, their parents are much more likely to join them.

“One of the things we see happening in the space is the rise of the television set as a viewing platform, when previously it was a lot of mobile and tablet viewing,” says Williams. “Smart TVs are the fastest-growing device for consuming streaming video, and it’s really interesting if you think about it how the television [set] over the past few years has transformed from a display for your cable and satellite feed, to a display for streaming video.”

An early adopter in the space, Genius Brands Network has had its own OTT channels since 2016. Now Baby Genius (for three to fives) and Kid Genius (for six to 11s) are available as branded channels on Amazon Prime, Apple TV, Android TV, Roku, Amazon Fire and Xumo.

The two channels’ offerings include original content like Thomas Edison’s Secret Lab, as well as acquired content such as The Day Henry Met…? But SVP of international distribution Caroline Tyre, who joined the company in 2019, doesn’t recommend producers or distributors try to launch entirely unique content now without partnering with another channel that has bigger name recognition first.

“Only 5% of the 5,000-plus video apps are discoverable on a lot of these platforms,” says Tyre. Genius Brands, for example, has Llama Llama (Netflix) and Rainbow Rangers (Nickelodeon) content on its OTT branded channels to help ultimately drive kids into the ecosystems. It’s only once kids are hooked, and audiences know they can reliably find new content for free, Tyre says, that producers can branch out.

“We know kids are really into gaming right now, and on other platforms there’s a lot of inappropriate ads,” says Tyre. “But on these platforms, everything is COPPA-compliant. And it’s much more curated because we’re looking at it and making sure it’s safe and not violent.”

She is now actively looking for more content to pick up and put on the Kid Genius and Baby Genius channels. Producers looking to fill their own channels face unique challenges as there can be a financial barrier to entry. So Genius Brands absorbs the costs of reformatting content for each platform and then splits revenue from the advertising 50/50 with the producer.

Maximizing that revenue, Genius usually negotiates with each platform to be able to sell its own advertising. Some platforms place all of the advertising in-house, but if distributors can bring advertising or sponsorship to the table, they’ll get a bigger cut of the profits, she says.

To do all of this, Genius works with Las Vegas-based Dooya Media Group, which not only helps sell and place the advertising, but also aids Genius with discoverability by making sure that the content is searchable.

While all of this is a bit more difficult than just uploading content on YouTube, ultimately it’s worth it, says Tyre. “It was really important to us to create something that was more curated, where we could either manage the ads or [pull them altogether]—especially because people are worried about what’s going to come up on YouTube.”

To OTT or not to OTT?

Ultimately, one thing that all producers stressed was that the metrics of success keep shifting in kids TV, and so to build a brand, everyone’s best bet is to be everywhere.

“If you’re looking to expand your kids brands into licensing, merchandising and other areas, you need to capture more audience than what you’re going to capture on just one segment,” says Vikrant Mathur, co-founder of Future Today. “So a lot of partners are using additional outlets—OTT specifically—to help drive awareness and audiences back to that longer format that they can find on the other services.”