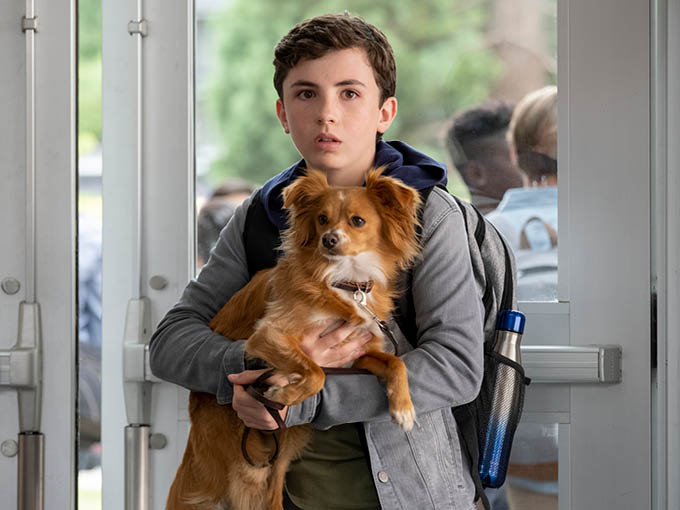 Editor’s note: This article was originally published in the April 2020 issue of Kidscreen. Since it went to print, more than one billion kids have been pulled out of school as a result of the growing pandemic. While this article was written ahead of the outbreak, and much of it focuses on the help kids can receive in schools, Kidscreen feels it offers valuable insights into how companies can help ease kids’ anxieties now.

Constant headlines about skyrocketing rates of depression, anxiety and suicide among today’s youth have become the norm. Some days, it seems as if it’s hardly news anymore.

While media attention often focuses on the plight of high-schoolers, mental health struggles—anxiety in particular—often develop much earlier. In fact, reported cases of anxiety, depression and related behavioral issues start rising dramatically in the elementary and middle school years. According to the National Education Association, anxiety is present even in kindergarten-aged children. “We expect so much from them, and they feel the pressure,” says teacher Marty Davis.

Even before the pressure of social media is added to the mix, kids are surrounded by anxiety-inducing news, pressures and schedules. By age six, kids are familiar with school lock-down drills to prep for active shooters. By age eight, they will be prepped for, and evaluated by, standardized tests—often told they cannot move up to the next grade if they don’t pass.

Outside of school, kids’ busy schedules provide little respite from pressure-filled days. And even the most diligent parents can’t shield their children from daunting news stories: the sustainability of the planet, threats to our democracy, political divisiveness and global health threats.

To combat these pressures and respond to the increased awareness of youth mental and emotional health struggles, organizations have developed an expanded battery of innovative tools and resources for helping kids cope—both at school and at home. 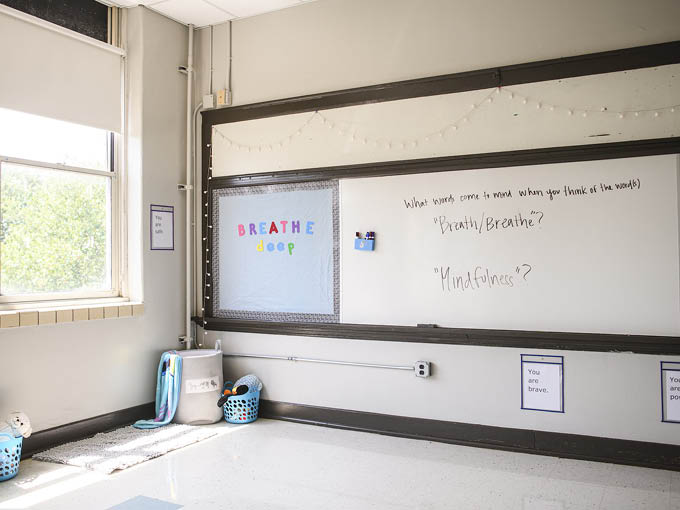 Schools are launching programs like the “BeWell” room to teach children coping mechanisms.

In response to research that draws a connection between mindfulness and lower levels of stress, school districts have begun developing proactive mindfulness programs. And there are indications that these programs will have a significant payoff: A recent study at The Massachusetts Institute of Technology found that sixth-graders who received mindfulness training not only reported feeling less stressed, but their brain scans showed reduced activation in the amygdala—the part of the brain that processes fear and emotions.

One such program is in place at Woodland Elementary School in Massachusetts, where teachers lead students in breathing exercises and focusing on kind thoughts. If students are overwhelmed and need a break, they are encouraged to take advantage of “recharge stations” where they can decompress until they feel ready to return to their seat.

While mindfulness and yoga may seem to some like solutions for a privileged few, Warner Arts Magnet Elementary School in Tennessee disproves this notion. With nearly 90% of the student body living in poverty—and many from families dealing with addiction—the school’s mindfulness program benefits not just the individual student, but also works to reduce emotion-induced behavioral problems. When students misbehave, they have access to the “BeWell” room with yoga mats, soothing music and an instructor to help with deep breathing. Over the past year, the principal says he has seen behavior referrals drop 80%. 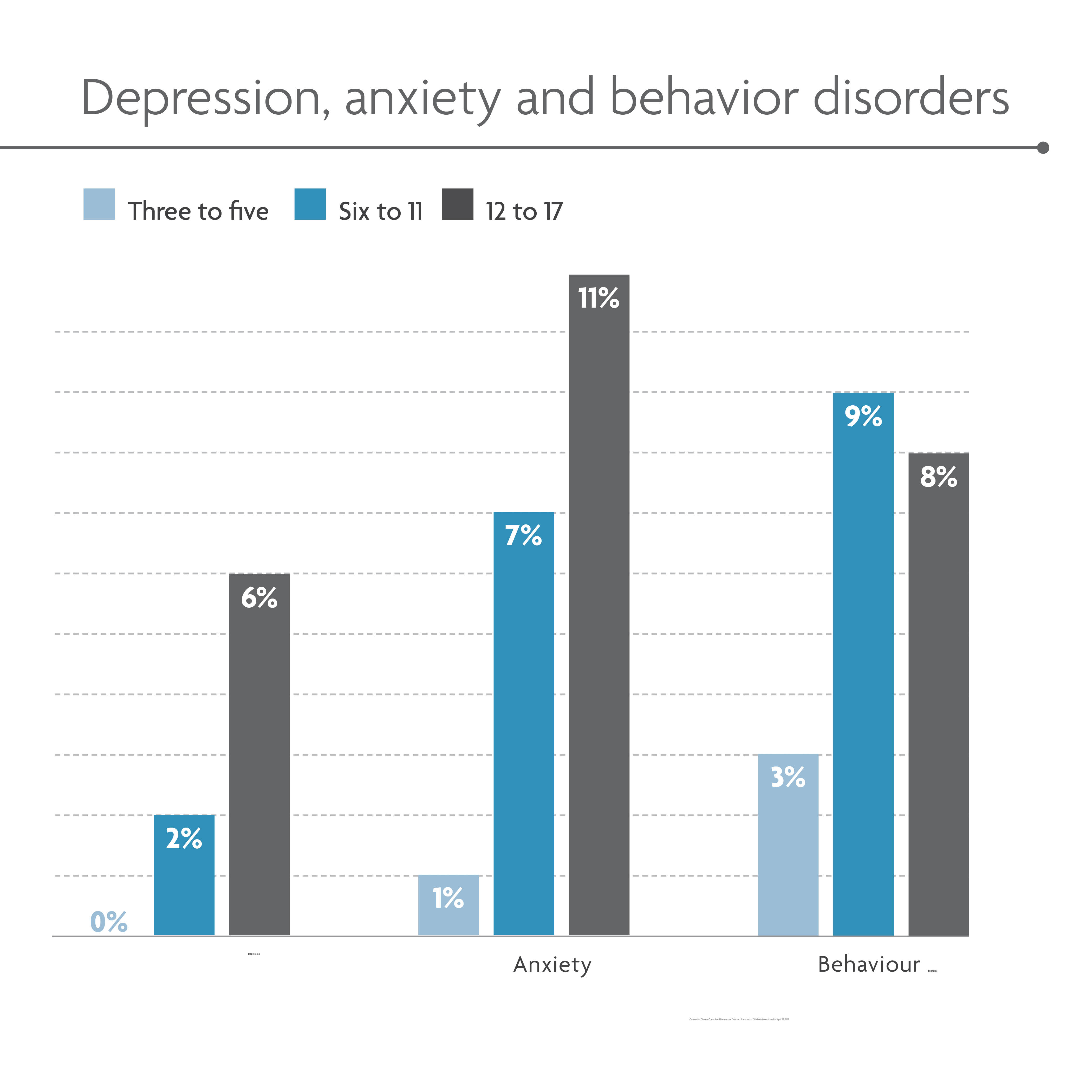 While many parents and child experts worry that too much screen time can negatively impact kids’ mental health, there is a recent increase in screen-based content designed to help kids cope with negative emotions. In addition to kid-centric apps teaching anxious children the skills they need, relatable characters—in both apps and on TV shows—are making kids and teens who suffer from mental health issues feel seen and heard.

While there are several apps that address mindfulness for kids (including adult favorites Calm and Headspace), there are two that feature familiar characters to lead preschool-aged kids through mindfulness exercises. Breathe, Think, Do with Sesame features a familiar Sesame Street monster who needs help conquering a variety of difficulties, including anxiety, which in turn teaches kids how to stay calm and breathe. The Smiling Mind app, meanwhile, also targets kids as young as five, and has partnered with Trolls and The LEGO Movie to feature characters from the films leading meditation exercises while discussing challenges they face.

As of January, kids suffering from anxiety also have a small-screen protagonist with whom they might relate. Noah Ferris, star of the Netflix series The Healing Powers of Dude, is a middle-schooler with crippling anxiety and an emotional support dog. The show’s lighthearted, comedic approach to an otherwise daunting condition can help shed light on what it’s like for kids who struggle with anxiety.

With these various screen options available, it seems like video games may be a natural next step. In a study funded by the Bill and Melinda Gates Foundation, the Center for Healthy Minds at the University of Wisconsin-Madison developed a video game called Tenacity to help improve mindfulness in middle-school students. To advance in the game, players must count their breaths by tapping a touch screen.

The study was primarily focused on how the game could influence kids’ attention levels (and found that it could re-wire their brains to be more attentive), but it also showed that video games can make kids more mindful overall.

“Games for impact have entered the mainstream, affecting both consumers and the industry,” says Constance Steinkuehler, a professor of informatics who led Tenacity’s creation while at UW-Madison.

By harnessing kids’ desire to engage with entertainment to decompress and escape, the media, toy and gaming industries can be powerful allies in families’ quest for wellbeing. Modeling behaviors, such as how to seek help, how to help a friend in need, and simply how to discuss emotions, are core opportunities for media to support kids coping with anxiety and depression.

Content featuring characters who are diverse on the inside can propel kids’ emotional fluency, sense of belonging and acceptance of others. Entertainment has the power to remove the stigma from mental and emotional wellness, boost awareness, and foster conversations to help kids feel less alone in their struggles.

Anne Knight is an insights genius at Smarty Pants,  a youth and family research and consulting agency. For more information contact Meredith Franck at 914-939-1897 or visit asksmartypants.com