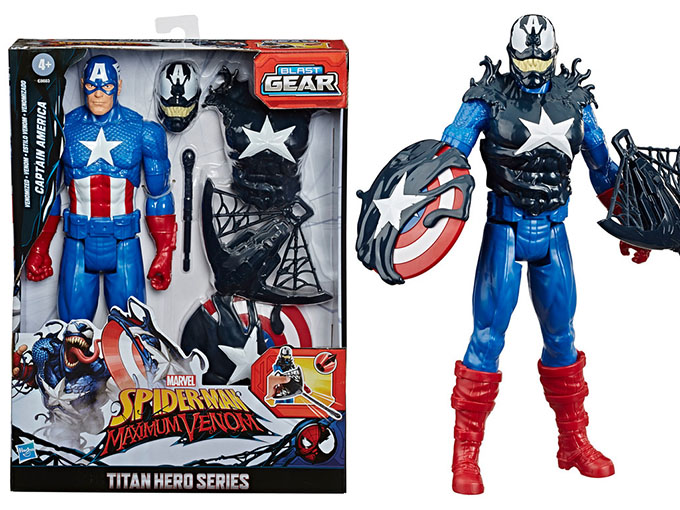 New episodes of Marvel’s Spider-Man will swing onto screens in April with a new look not only on screens but also in the toy aisle. The third season, Marvel’s Spider-Man: Maximum Venom, will launch on Disney XD and see Spidey take on some of Venom’s characteristics in an effort to fight a threat from the character’s home planet.

“What this means for viewers is it’s the first time that characters, including members of our Avengers and Guardian teams, will have what we call a Venom-ized look,” says Paul Gitter, SVP of Marvel licensing at Disney Consumer Products.

That new look will carry over to the consumer products program, which will include toys, apparel, accessories, bedding, home décor and stationery. The offering from master toy partner Hasbro, for example, will include action figures that come with accessories, which can be used to transform the characters into their Venom-ized versions.

This evolution sees fan-favorite characters like Captain America (pictured) take on a completely new persona with Venom-inspired masks and weapons. Even the packaging will be Venom-ized, with unboxing features and art inspired by the alien character. Hasbro invested in significant tooling to create an entirely new line, Gitter says, rather than simply painting existing SKUs to look more like Venom.

“We didn’t want just a normal product coming out and pretending it’s part of the show. It’s specific product tied to a specific show, but it can absolutely live on. If the product performs extremely well, we may bring back another Venom-ized release.”

The first products will launch with retailers across North America following the premiere of the new season, with additional items rolling out throughout the year. The consumer products program will also expand into additional territories in the coming months.

Marvel’s Spider-Man: Maximum Venom will appear, in some form, on the YouTube channel Marvel HQ. The channel is an ongoing focus for Marvel moving forward, Gitter says, with the company working to provide localized content alongside its global offerings.

Marvel’s Spider-Man first premiered on Disney XD in August 2017, and the second season bowed in June 2018. The show followed in the footsteps of the long-running hit Ultimate Spider-Man, which closed out after a record-breaking 104 episodes.