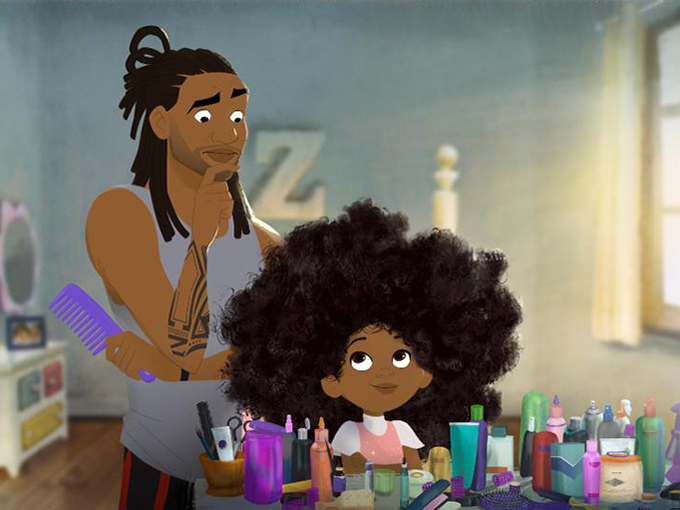 St. Louis-based comic publisher Lion Forge just entered the animation market last May, and already its first project animated short Hair Love has become not only an Oscar nominee, but a frontrunner for Sunday’s race. Starting out with a short may seem unorthodox, but the format has a faster speed to market, says Lion Forge’s president Carl Reed, and the burgeoning prodco really wanted to get its name out there quickly. And the strategy appears to be paying off on the awards front.

The Hollywood Reporter, Vanity Fair, Forbes and IndieWire all predict that Hair Love, and its story about an African-American dad learning to do his daughter’s hair for the first time, will take home the Oscar.

“We needed something that would be representative of our values on diversity and authenticity, as well as highlight the types of stories we’re interested in telling, and the people we want to work with,” says Reed.

Lion Forge is focused on featuring diversity in its storytelling—which means showcasing women, people of color and the LGBTQ community behind and in front of the camera—and this film ticked those boxes. Produced alongside US studios Sony Pictures Animation, Matthew A. Cherry Entertainment and Six Point Harness, Hair Love features Matthew Cherry (BlacKkKlansman, The Last Fall), Everett Downing Jr. (WALL-E, Brave) and Bruce Smith (The Proud Family, Space Jam) as its directors. The short began as a Kickstarter campaign in 2017 with the goal of raising US$75,000, but ended up reaching almost US$300,000. Sony first released the film in front of The Angry Birds Movie 2 last year, followed by a YouTube launch last month where it has already climbed to more than 14 million views.

The film’s Oscar nomination is a huge step in the success direction for the growing prodco, and exactly what it needs to help it launch successfully from comic publisher to animation studio, says Reed.

“We want to offer people a glimpse into other people’s perspectives and find out what drives them,” says Reed. “Both in comics and in animation, we’ve had to prove ourselves, and Hair Love is us setting ourselves apart and making moves to show that we stand for diversity, which has paid off for us in publishing.”

The studio is developing a number of projects, including TV shows, a feature film, adult-skewing comedy and 10 educational series for kids. It plans to announce more on these projects in the coming year, and the Lion Forge’s presence in the industry is growing because the nomination gives it some credibility, he adds.

“Traditionally, the role of black creators and minorities has been to take a lesser role in the production or ownership or creation of media,” says Reed. “We think it’s important that Lion Forge is a minority-owned place for creators to go and trust their vision will be unadulterated. We’re well on our way in achieving that on the comics side, and now we’re proving ourselves as a studio, and hoping we can accomplish that in animation.”

Check out Kidscreen’s coverage on the other four Oscar-nominated animated shorts,starting with Monday’s piece on Czech film Dcera, and Pixar’s shift to 2D with Kitbull, French stop-motion film Memorable, and Siqi Song’s student film Sister. And with this our coverage of the #OscarShorts2020 comes to an end. The winner will be announced this Sunday at the Dolby Theater in LA.