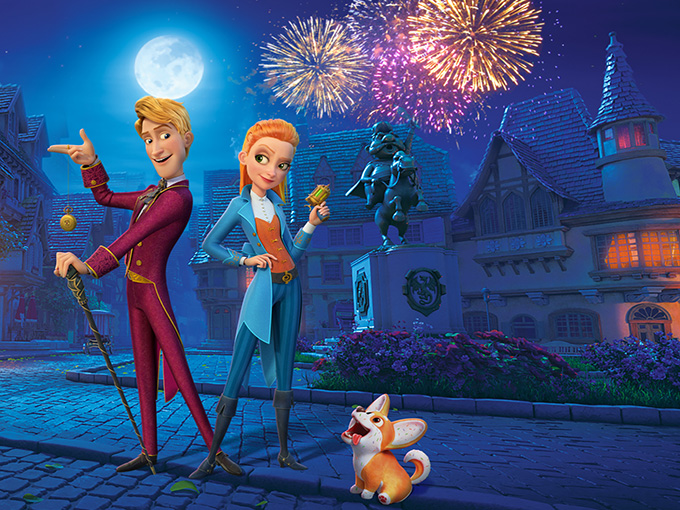 On the heels of the international success for Masha and the Bear and Kid-E-Cats, more Russian prodcos are looking to bring their style (and tax breaks) to the forefront of the industry.

Masha and the Bear is everywhere right now on global broadcasters, toy shelves and app stores. In the wake of Animaccord’s globally popular kids series, and other thriving shows like CTC Media’s Kid-E-Cats, international demand for new Russian animation projects is growing. The interest from buyers is a big reason why a record number of Moscow-based toon companies are looking beyond their own borders and trying to capitalize on that global spotlight.

Twelve prodcos in total will present content under Created in Moscow at Kidscreen Summit next week in Miami. The brand was launched by government-established company Moscow Export Center and promotes Moscow manufacturers worldwide.

According to Moscow Export Center CEO Kirill Ilichev, animation is one of the most-promising and fastest-growing sectors within Moscow’s creative industry. In fact, the total value of the Russian animation, VFX and games market is projected to reach US$2.1 billion this year, up from US$1.7 billion in 2018, according to Dublin-based analyst Research and Markets. The growth comes after the industry essentially shut down following the breakup of the Soviet Union in 1991, and has only reemerged in the last 10 years or so.

Ilichev points to the unique style and cultural code of Russian animation, which, in combination with modern technologies and production quality, is attracting buyers worldwide. “Following our presentations last year at MIFA (Marché International du Film d’Animation) in Annecy, The Toronto International Film Festival and the American Film Market in Santa Monica, we had great interest from buyers and investors from all over the world,” says Ilichev. “Since Moscow studios have new titles and spin-offs ready for the market, and Kidscreen Summit is [an] important event in the kids’ entertainment industry, we believe it’s time to expand.”

Russia’s toon sector is also being bolstered by a new 30%-to-40% tax incentive for feature films, series, documentaries and animation. The program launched exclusively for qualifying Russian companies late last year. The government will allocate US$12.8 million on rebates in 2020, while US$23.5 million is set for 2021. The subsidies will be distributed by state-owned institution Russian Export Center (REC) and supervised by the Ministry of Economic Development of Russian Federation.

“Animation producers will have to spend at least five million roubles [approximately US$78,969] in Russia to get the rebate, which can also go up to 40%,” says Evgeniya Danilchenko, head of REC’s creative industries export department. “Getting the maximum percentage involves having at least 50% of all work done in Russia (at the stages of development, production and post-production) and spending no less than 25 million roubles (approximately US$394,847) in the country.”

She adds that covering Russia and Russia-related topics is paramount to get the maximum rebate.

Danilchenko expects the rebates to generate financial profit for Russia’s audio-visual industry, create additional jobs and contribute to the growth of local production. “We will see how it goes within the next few years, and make amendments if necessary,” she says. “For now, we’re looking forward to the first successful cases in 2020.”

Wizart producer Vladimir Nikolaev hopes to eventually take advantage of the rebate and is optimistic for the future of the sector. Founded in 2007, Wizart is best-known for its CGI-animated film franchise The Snow Queen. The company is looking to expand though, and wants to find co-production and distribution partners, plus writers for its new TV projects. These include a 26 x 12-minute series for four- to nine-year-olds called Firebots and a 26 x 22-minute series for seven- to 10-year-olds based on Wizart’s upcoming Hansel and Gretel adventure-comedy movie franchise (pictured). It’s also looking to partner on season two of Snow Queen spin-off TV series, Snow Queen: The Keepers of Wonders, plus finalize a voice cast for Hansel and Gretel, which is expected to hit theaters at the end of the year.

Wizart most recently struck a co-production, co-development and distribution partnership with American filmmaker, financier and international distributor QED (District 9). The companies’ first co-pro is Wizart’s feature Hansel and Gretel. “To attract more people to theaters, we need to have a strong partner in the US,” says Nikolaev. “You can have a good title, but [its success] depends how much people are involved in the production and distribution, and how many connections they have with TV and VOD channels.”

StoryTime Gets its Start

StoryTime co-founder and CEO Julia Mindubaeva is looking for creative teams for its original projects, as well as aims to secure deals with international distributors and YouTube partners in some of the platform’s bigger languages like English, Spanish and Hindi for its new 52 x three-minute, digital-first 2D preschool series Berry Buds to grow her company’s presence outside of Russia.

Mindubaeva is also looking for co-pro partners for two animated projects in development, including a series for girls ages six to nine. She has her eye on the format space, too, after StoryTime adapted Happy Films’ UK mixed-media series Bookaboo, for Russian kidcaster Carousel and SVOD service START last year. StoryTime launched in 2018 by Mindubaeva and Vasiliy Kutsenko in partnership with Yellow Black & White, one of Russia’s biggest entertainment companies. Yellow Black & White also operates START, the company’s business arm for streaming.

Mindubaeva says it’s becoming more important for Russian producers to distribute kids content internationally in the wake of success stories like Kid-E-Cats and Masha. “Before launching StoryTime, I was head of business development at CTC Media, developing the animation division and I was a producer on Kid-E-Cats,” says Mindubaeva. “One of the key factors of international success of this series is that it had the right international creative team.”