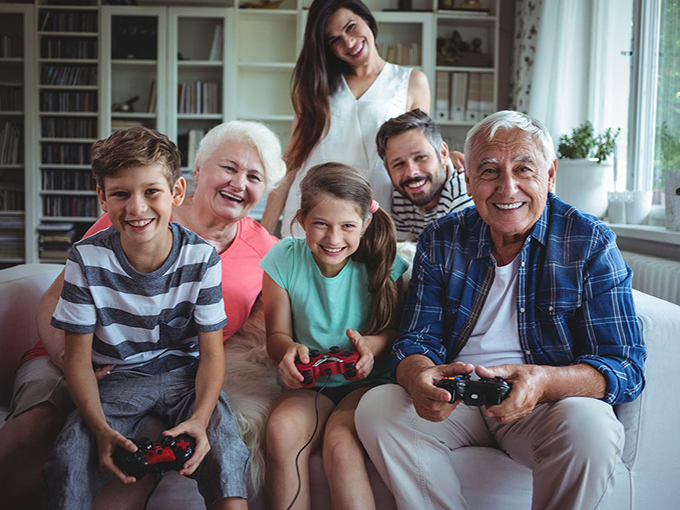 Gaming is the top at-home activity for families

Gamifying brands and integrating them with voice assistant tech is the way to reach Millennial parents and their kids, says Fullscreen's Crystal Surrency.

The number one at-home activity for Millennial parents and their kids is video gaming, according to Fullscreen. Data from the social media research company’s 2019 Generational Report: Next Gen Families found these parents spend an average of 8.5 hours a week gaming, and 50% of them say their child uses a video game system regularly.

Fullscreen’s new study is focused on this younger generation of parents, but adults’ love of gaming—as well as their tech adoption—trickles down to their kids, says Fullscreen’s SVP of strategy and insights Crystal Surrency. To reach this audience, gamifying a brand is a smart way to reach families that spend so much time co-viewing with consoles, she adds.

“These new parents were the ones who bolstered growth in the video game industry when they were young, and now they’re passing down a love of gaming to kids,” says Surrency. “To succeed in the coming years companies are going to want to join the space with new games.”

“Millennial parents are using voice technology with their children, and for the parents who were regular users of voice tech, their children were also regular users,” says Surrency. “It’s a source of education, music streaming, listening to stories and for interaction with brands. Companies should look into getting integrated with Siri and Alexa Skills, and thinking about how they can integrate voice into their content strategy.”

New content alone isn’t enough to reach parents, though, and companies need to present themselves (and their offerings) as safe and appropriate for kids, she adds. In fact, 62% of parents’ top concern for online content is that it might have inappropriate themes. On the flip side, they’re much less worried about their kids developing a tech addiction (33%) or getting bullied online (38%).

Fullscreen conducted the survey in partnership with research firm Talk Shoppe. The companies surveyed 1500 13- to 37-year-olds in the US, 400 of which were parents with at least one child.  The survey was conducted online in April and May of 2019, and Fullscreen also did in-person interview with parents in LA and Columbus.