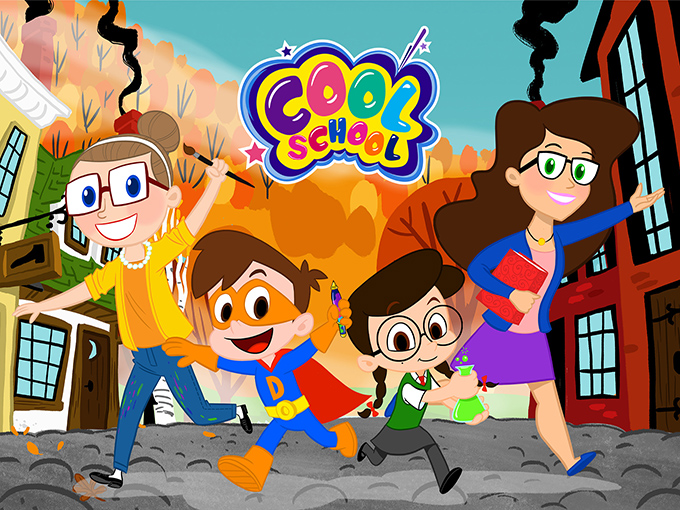 In line with its strategy to steer into franchise management, the producer of popular digital-first kids property Cool School is rebranding as Driver Studios.

New York-based Driver Digital is rebranding to Driver Studios, bringing its kids and family entertainment business and its commercial prodco Driver Media under one umbrella.

The structural alignment is expected to better serve the company’s partners and help transform Driver’s brands into franchises, including YouTube kids IP Cool School (pictured) and its spinoff animated and live-action series Storytime with Ms. Booksy, The Stupendous Drew Pendous and Crafty Carol.

As Driver Studios, the company will specialize in developing, producing, distributing and licensing children’s entertainment content primarily for preschoolers and kids ages five to eight, as well as provide branded content and advertising solutions. Driver’s IP portfolio is expected to expand significantly and a handful of new shows will be released each year.

As far as bringing content to viewers, Driver’s immediate focus is to leverage its Cool School YouTube channel, but also continue to distribute through SVOD and AVOD. While details of its development slate are scant, the company does have a long-form kids series slated to launch on a linear broadcaster internationally this year and are open to linear relationships for future content development.

Driver Digital’s previous partners include Sesame Workshop, Mattel, DreamWorks and Nickelodeon. The company’s commercial division, meanwhile, has delivered content for agencies and brands like Microsoft and Coke and worked with Hollywood talent such as Julia Louis-Dreyfus and Ellen DeGeneres.

The rebrand comes on the heels of former Nick exec Melanie Summers joining the company as chief brand officer in May. Reporting to founder and CEO Scott Weitz, she oversees marketing, licensing and business development initiatives for the company’s original YouTube brands, as well as new properties.

A month after Driver’s new hires, the company sold its entire Cool School catalogue to AVOD Kidoodle.TV, which launched the show’s 400 educational episodes in 145 countries across connected devices, including Apple TV and Roku. Since launching, the Cool School YouTube channel has generated more than a billion views and boasts one million-plus subscribers. The brand has also expanded into graphic novels under a publishing deal with Sterling Children’s Books.

The company will be on the lookout for new partners at Kidscreen Summit in February.