The algorithm rules YouTube—but WildBrain Spark and Fullscreen are using tactics like playlists, livestreams and sub-brands to drive new audiences to content.

It’s the golden age of content! But with so many platforms and shows to watch, no one can find anything new. All week we’re breaking down different discoverability problems and how to beat them. If you haven’t seen Monday’s introduction to discoverability and why it’s an issue facing creators today, then go back and check it out here, then follow that up with what platforms are doing to tackle discoverability. You can also keep up with the whole series here.

Nearly five billion videos are consumed on YouTube every single day, and more than 300 hours of video are uploaded every minute, according to the platform.

When kids content makers add their own offerings to that massive volume, they have to fight through everyone else to be seen. Most people believe the solution is to learn as much as you can about the algorithm, and work within that framework.

But it’s important to remember how fast YouTube is changing, especially for kids content. In July, ahead of a record US$170-million settlement with the US Federal Trade Commission, the platform made major changes to its algorithm without warning, which Bloomberg reports affected a number of kid producers. Increasingly, content creators can’t rely on the whims of the giant, which has its own issues to deal with.

To give videos the best shot at being seen, Fullscreen strategy VP Kyle Cushman tries to get brands and more traditional content producers to think like YouTube-native creators, which means programming for an audience rather than the algorithm.

For the kids audience, this means creating engaging thumbnails, titles and video descriptions. The thumbnail is probably the most important element because it is so visual, says Cushman, and the best way to engage kids is to hyper-focus on a subject.

If it’s about Christmas, for example, then put a Christmas tree in the thumbnail. There are nuances, of course. Videos from a creator-led channel are more likely to get clicked on if the creator’s face is in the frame. For branded channels, and toys specifically, the imagery should be focused on the product and have a celebratory bent.

“Overall you want it to be bright and fun, and reflect what the content is actually about,” she says.

Fall in love with playlists 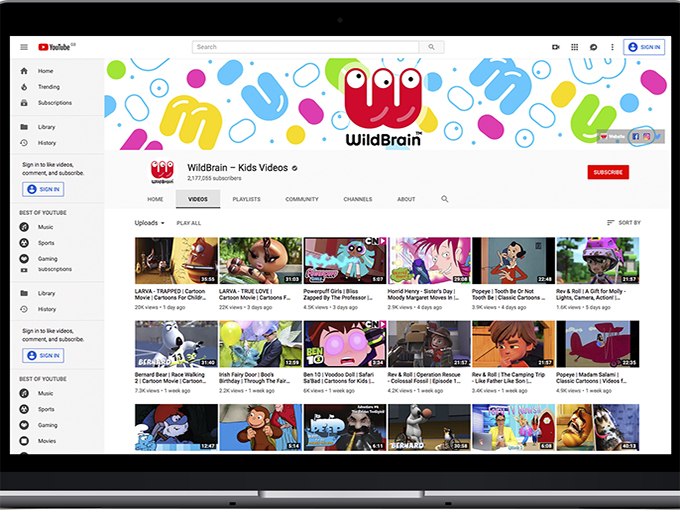 To drive audiences to discover new content on YouTube, WildBrain (formerly DHX)-owned digital network WildBrain Spark is taking lessons from broadcast channels and building specific and targeted playlists and channels for the AVOD. The benefit of merging multiple pieces of content from different brands into one playlist is that you (ever so slightly) override the algorithm. Unless a user has specifically turned off this function, rather than loading up recommended content, YouTube will play the next video from the playlist and recommend other content from that channel.

WildBrain spark has also done research on what kids in different regions most want to watch, and then localized that content into aggregated channels. For example, managing director Jon Gisby noticed that in Indonesia, Teletubbies had a higher than expected volume of views. As a result, he launched a Teletubbies channel specifically targeted at the market and created a sub-brand called Tiddlytubbies, with content specifically for the regional digital audience. Some videos have netted upwards of six million views.

“The ability to experiment with what works for audiences is extraordinary,” says Gisby. “It unlocks new creative opportunities to keep brands refreshed and keep audiences engaged.”

WildBrain Spark has also learned to love the livestream, which has been driving more traffic to its channels for two reasons. First, when a livestream is announced, it signals a can’t-miss moment, and viewers jump online to watch—even if it’s been previously uploaded as a static video. Second, it signals to the algorithm that something exciting is happening on those channels and directs more people there, says Gisby.

The digital net has previously also relied on paid media to increase discoverability of new content. WildBrain Spark worked with its proprietary and third-party brands to place targeted ads across similar kids videos directing traffic to its content. But with YouTube pausing all personalized ads for kids, the digital net now has to navigate yet another wrench in the cogs.

Tune in tomorrow to find out how to take social media by storm.