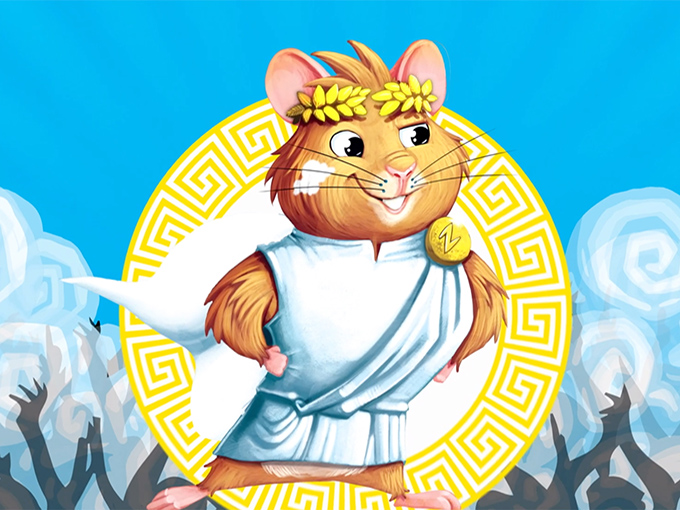 As Explorer Academy snags a Disney+ order, National Geographic is turning its attention to kids-focused podcasts to grow its latest book series.

National Geographic hopes kids will be all ears for the new fiction series Zeus the Mighty and its companion podcast. Launched through Nat Geo’s Under the Stars imprint, the middle grade books are inspired by Ancient Greece and Greek mythology.

The first book title, Zeus the Mighty: The Quest for the Golden Fleas, bowed last week, and Nat Geo plans to roll out a new book every six months. Set in a pet center in Athens, Georgia, the story follows the confident hamster Zeus and his furry friends as they take on mythological quests.

To support the series, National Geographic bowed a website, videos, magazine content and an online game. Additionally, the company created the Greeking Out podcast with Kids Place Live in an effort to further expand the world of the brand.

The podcast series features kid-friendly retellings of ancient Greek myths and is tied closely to the book series in the most meta way—the book characters are inspired to go on their adventures after listening to episodes of the Greeking Out podcast. The first podcast episode was made available on October 21, in advance of the book’s launch. New episodes will launch each week.

“Many podcasts tend to focus heavily on dramas for teens and stories for preschoolers. We noticed that there was a huge opportunity to curate content for the kid crowd,” says Becky Baines, Nat Geo’s VP and editorial director for kids books. “We felt that adding that extra layer of multimedia—that the characters in the story listen to as well—would help to make reading and learning even more exciting for children.”

According to data from Edison Research, Nielsen, IAB and PwC, there are more than 700,000 active podcasts with more than 29 million episodes. More than half (51%) of the US population have listened to a podcast, with 22% tuning in weekly. Podcast listeners subscribe to an average of six shows, and podcast ad revenue is expected to reach US$1.6 billion by 2022.

Explorer Academy, the first fiction series from Nat Geo’s Under the Stars imprint, launched last year and targets kids eight to 12 with a blend of real-world science and out-of-this-world adventure. That book series is also being adapted into a TV series for Disney+ by Nat Geo Kids.