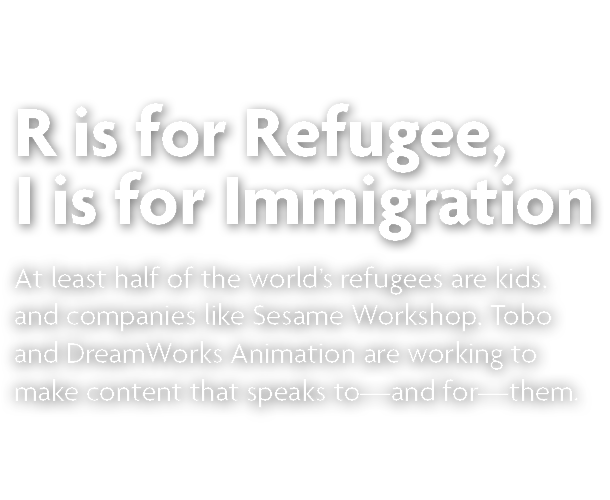 Weekend read: At least half of the world's refugees are kids, and companies like Sesame Workshop, Tobo and DreamWorks Animation are working to make content that speaks to—and for—them.

Scott Cameron has been hanging around the New York City street where Big Bird sings and Cookie Monster stuffs his face since the late ’90s. So when the executive producer found himself wandering the far-flung roads of Jordan, Iraq and Lebanon for three weeks this summer, it was only natural that he was thinking about how he could bring the magic of Sesame Street to those distant communities.

But that’s not an easy task. Children there aren’t just grappling with typical growing pains like learning to make friends, starting school or welcoming a new sibling. After their families fled the civil unrest and bloodshed of Syria for migrant camps—rife with post-traumatic stress disorder, depression and anxiety—many kids also have to deal with being forced away from the only home they’ve ever known.

Cameron and Sesame Workshop, the non-profit organization behind the hit children’s brand, are intent on easing those burdens with an ambitious set of initiatives they’re expected to unveil in the coming months. Cameron was in the Middle East visiting refugee camps to investigate creating a show coupled with at-home support through community health workers and play-based learning at child development centers.

The plans place Sesame in an emerging group of children’s entertainment companies edging into programming aimed at migrants and refugees. Vampirina and Yalla Nehna have immigrant characters or Syrian stars, while 3Below and the upcoming Dounia both have plots touching on migration.

Such programming has been a long time coming. Those behind it say many studios have shied away from these topics because of the difficulties of juggling the lightheartedness of children’s programming with the severity of issues faced by the 70.8 million who have been displaced by conflict and crisis around the globe. But at least half of the 25.9 million refugees worldwide are under the age of 18.

“It is tricky for a children’s television show to tackle some of the more difficult issues that refugees face because you don’t want to trigger or re-trigger trauma a child has experienced,” says Cameron.

Sesame’s foray into programming for refugees started with the 100&Change competition from the MacArthur Foundation. The philanthropic organization offered US$100 million in 2017 for the best proposal “that promises real and measurable progress in solving a critical problem of our time.” Sesame teamed up with the International Rescue Committee for its pitch.

A year later, the LEGO Foundation sweetened the deal, pledging another US$100 million and vowing to deliver “play labs,” storybooks, games, videos and puzzles as part of the multi-year plan.

On top of targeting those affected by the Syrian refugee crisis, LEGO and Sesame’s efforts will reach out to thousands of Rohingya children, whose families have fled Myanmar for Bangladesh due to widespread persecution.
The partners will focus heavily on a 26-episode series called Ahlan Simsim (Welcome Sesame). Each 26-minute episode will begin with a story focused on two lead Muppets dealing with emotions. The second half will take on a variety format that expands on the story’s themes and includes new Muppets—Cameron won’t share details on them yet—interacting with animated characters, real children, celebrities and music. 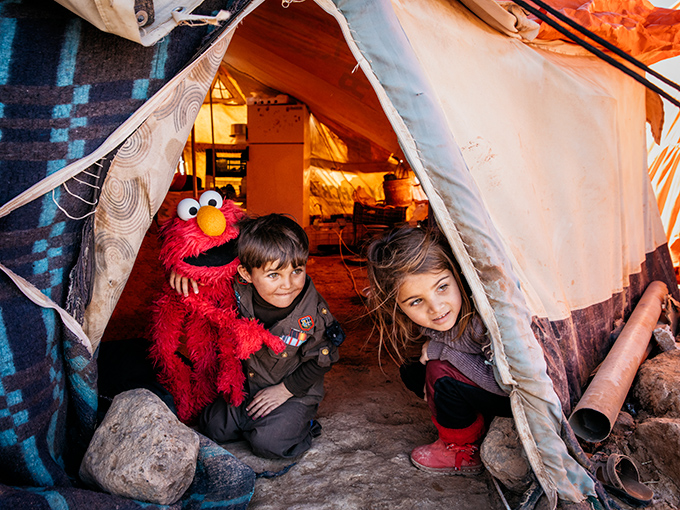 Episodes will be in Arabic, aiming for children between ages three and eight. The show will combine some of the brand’s hallmark teachings—math, language and reading—and focus on socio-emotional themes. It won’t be a stretch to see episodes where a Muppet has to leave home or befriend a new neighbor.

“We filter everything through this lens of ‘What are the issues and concerns that are very salient for children who are refugees or who are displaced?’ And then we look at the most important ones and see which are also things that children in host communities have [to deal with],” says Cameron.

Cameron uses fear of the dark as an example. Sesame wants to address the topic so all kids understand fear. Even though not every child will be frightened by the dark, it is likely they will have a sibling, friend or new refugee neighbor who is.

“We can impart lessons around labeling and coping with the fear, and give strategies that will be helpful for children who are refugees and who are not,” says Cameron.

Cameron is hopeful such lessons will stick because the brand has strong ties to the Middle East. Iftah Ya Simsim, a local version of Sesame, launched in the Persian Gulf in 1979 and ran until 1990 and was rebooted in 2015. People spanning from age two to 40 sang the show’s theme song on Cameron’s visits, and Grover, Cookie Monster and Elmo are well recognized and beloved there, too, he noticed.

Reaching the Middle Eastern audience won’t be as simple as linking up with a broadcaster and sending the program to air, though. Refugees in the show’s target regions often have interrupted access to television—if they have access at all—and cellular service can be spotty. To combat these issues, Sesame will roll out its programming on as many platforms as possible, including television, mobile phones, digital platforms and direct services.

But there’s still the issue of making sure it airs when kids can see it.

“In refugee populations, some children aren’t in school at all, or if they are, they have to go later in the day because the schools can’t absorb all the children,” says Cameron. “You don’t just want to broadcast at the peak time for the target age range because not all kids might be at home. You have to try to get the show on air a few times, or maybe you drive them to YouTube.”

Sesame isn’t the only brand making use of the Internet to reach refugee populations. 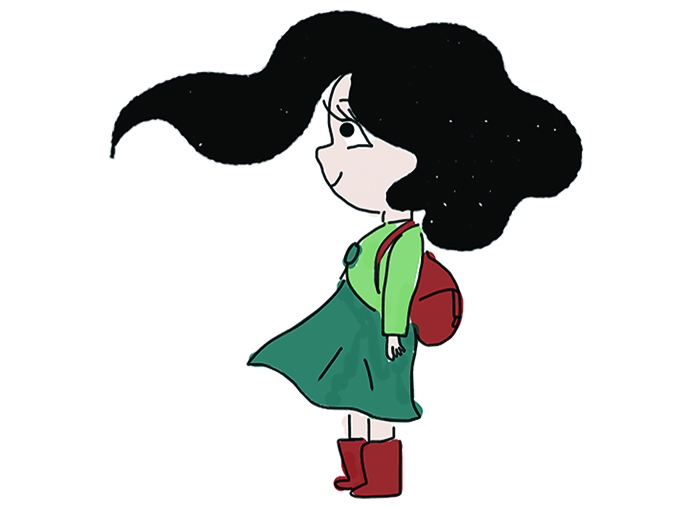 Dounia, from Montreal studio Tobo, will begin as a six x seven-minute web series for Télé-Québec and then become a medium-length film for television or theaters. Production is set to start in the fall, with hopes of releasing it in the Middle East and Europe.

The program focuses on a little girl living in Syria who has to leave her home when the war breaks out. Viewers follow Dounia’s migration journey to Canada.

Tobo executive producer and co-CEO Judith Beauregard says her company was intent on not shying away from the “tough moments” Dounia will face. So the studio uses a touch of “magic realism” to ensure scenes aren’t too overwhelming for their target audience of kids between ages six and 10.

“When they are on the Mediterranean Sea, and the water becomes too agitated, Dounia will see her own mother—who is deceased—as a goddess of the sea who takes the little boat into her hands and brings it to shore, to safety,”
Beauregard says.

Tobo is anxious to tell Dounia’s story because so few broadcasters are addressing migrant issues. Interest in the project has been strong already, though some still have doubts.

Beauregard has heard some worry that Dounia might be “too sensitive and too scary” because it details the war, Dounia losing her home and her friends, and the difficulties of adjusting to life in Canada.

“Some people feel that children cannot handle those subjects, but I think if it is done with a lot of sensitivity, it can be done well,” she says.

Dounia’s story was especially important for Marya Zarif, the show’s creator, to tell. She was born and raised in Syria and came to Canada long before the current unrest broke out. She founded two non-profits—one promoting her homeland’s culture and the other fundraising for play areas in refugee camps in Turkey and Syria—around the same time Canada was resettling 40,000 Syrian refugees.

It’s those families and their new neighbors that she and Beauregard envision Dounia resonating with most, because refugees don’t often see themselves represented in television, and those living in the places where newcomers are welcomed don’t always realize what displaced people went through to get to their final destination.

“What they see is the migrants coming in, but they don’t have an understanding of the hardships and the challenges,” Zarif says. “We hope we will bridge that gap because if children had a better appreciation of the difficulties those kids go through, I think they’d be even more open to discussing it.”

DreamWorks Animation’s second installment of its Tales of Arcadia trilogy, 3Below, has a similar goal. 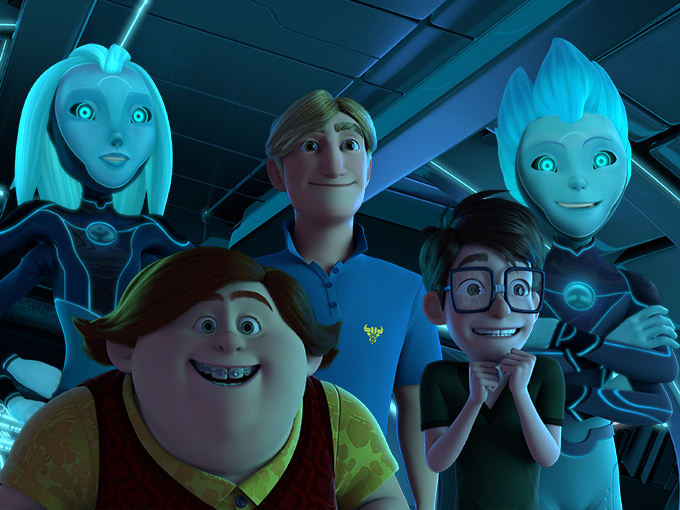 The Netflix series, which bowed in December 2018 and premiered a second second in July 2019, tells the story of royal teen aliens Aja and Krel who crash-land on Earth with their bodyguard. To shield their identities and help them evade intergalactic bounty hunters, their spaceship transforms them into a girl, a Latino boy and a senior citizen—because the disguises are “three forms that people on the mud planet tend to ignore.”

As they adapt to a new home, Aja and Krel are confronted with situations that would hardly seem foreign to migrants and refugees. A police officer, for example, quizzes Aja and Krel on whether they know what a school is. In another scene, we see the characters confused when they’re asked for money at a store and don’t understand the concept of commerce.

Such allusions to immigration were deliberate, despite the show never dropping the words “migrant” or “refugee.” Famed immigrant producers Guillermo del Toro and Rodrigo Blaas are behind the series, after all, as 3Below‘s executive producer Marc Guggenheim pointed out.

“We talked a lot about what it’s like to be a stranger in a strange land,” Guggenheim says. “We are not sugarcoating [migration]. The show doesn’t tread too often into topics of prejudice, but occasionally we have touched on it and the goal has been how do we do so in a truthful way. It’s when you are not being sincere that you risk losing the audience.”

The show faced a unique challenge because it was crafted amid growing debate in the US around immigration that was stoked by President Donald Trump vowing to construct a border wall and remove unlawful entrants. When 3Below‘s second season launched in July, such controversy was (and is) still raging.

“These are very universal topics, so for us, the challenge is avoiding feeling like we’re making some kind of political statement.”

To do that, the show relies on a touch of humor. There is a scene, for example, where the audience learns Aja and Krel aren’t used to learning in school by being lectured by a teacher. Instead the characters learn through a process called thermogenic osmosis. The scene is an opportunity to “hold a mirror up to our world,” Guggenheim says.

“We weren’t trying to poke fun necessarily at America or an anti-immigrant perspective,” he says. “We were actually just trying to poke fun at all these earth-bound human conceits that we all take for granted but that, at the end of the day, are kind of silly. Maybe there is a better way to be educated.”