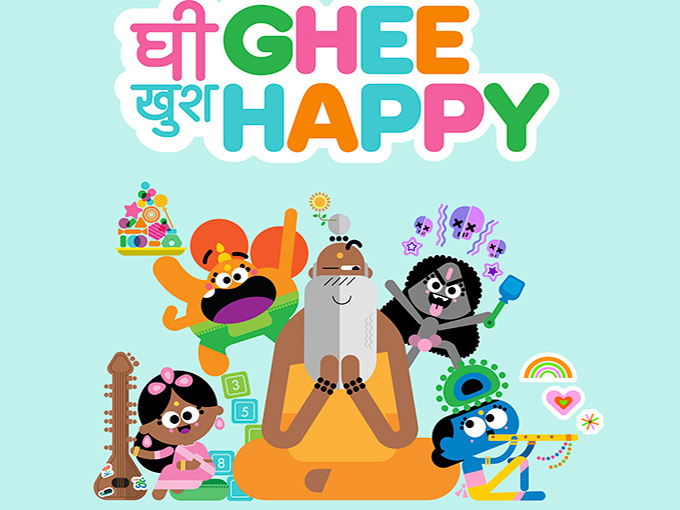 Former Pixar animator Sanjay Patel hopes to bring his cultural roots to the masses with his first show, Ghee Happy.

Netflix has greenlit Ghee Happy, a new animated preschool series created by former Pixar animator/director Sanjay Patel. The 20 x 11-minute series is currently in production after a year of development, and a premiere date has yet to be announced.

Each episode starts with a Sanskrit word and then follows five Hindu deities (Kali, Saraswati, Krishna, Kārtikeya, Ganesha) reimagined as kids together at a daycare overseen by their guru.

“These are not my parents’ gods. Most people have come across traditional imagery of the Hindu deities—and this isn’t that,” says Patel. “This is through the lens of an artist who has roots in both in India and America. This is a modern, playful, inspired adaptation, so it’s very bright, fun and poppy.”

Patel has worked on a number of Pixar films as an animator, including Monsters Inc., Ratatouille, Cars, Toy Story 2 and the Incredibles 1 & 2. He also directed the Academy Award nominated short film Sanjay’s Super Team inspired by his own childhood. But it was his book, The Little Book of Hindu Deities, that caught the attention of the Netflix team. They came to him and asked him to create a preschool series in the same vein.

“All of my work has had this connective thread—which is me trying to figure out a way for me to connect to my cultural roots,” says Patel.

He says that growing up in the United States, and despite growing up in a home filled with Hindu iconography, he often felt as though he didn’t know much about his own roots. As a parent, he wanted his kids to feel that deeper connection, and noticed a dearth of Hindu content for younger audiences.

“If I’m lucky Sesame Street will have one—maybe two—episodes focused on Indian culture and stories from Southeast Asia, but there aren’t really any shows that are going to delve into for the length of 20 episodes,” says Patel.

Stepping away from films and into a TV series for the first time was a big shift for Patel, but he says this was the best way to be able to tell as many stories as possible, which also made Netflix a natural partner. He hopes to reach kids in India and the United States with these stories.