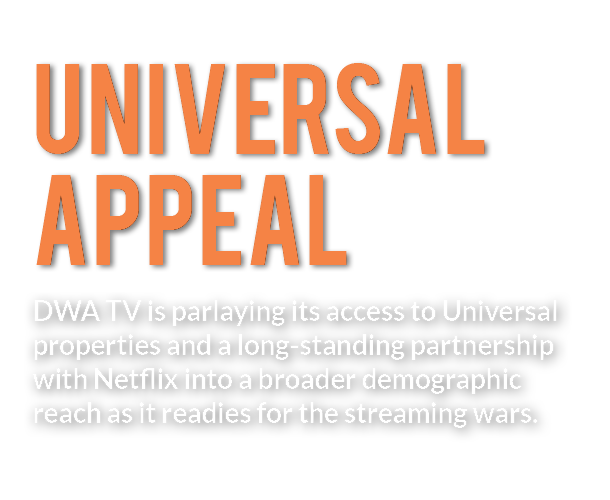 DWA TV is parlaying its access to Universal properties and a long-standing partnership with Netflix into a broader demographic reach as it readies for the streaming wars.

When DreamWorks Animations’ television production arm (DWA TV) announced last year it was developing an animated Netflix series for kids based on Universal Pictures’ Fast & Furious mega-franchise, the project generated considerable buzz and raised some interesting questions. How could a live-action franchise known for its use of stylized violence and sexual innuendo be adapted for an audience accustomed to family-friendly DWA TV shows like All Hail King Julien and Spirit Riding Free? Will an aged-down animated version stifle the original tone of the movies? Will it alienate adult fans? But for the NBCUniversal-owned producer, when it took into account the company’s creative growth strategy, the needs of the market and its research into the brand, the decision to reimagine Fast & Furious simply made a lot of sense.

Fast & Furious: Spy Racers, as it’s now called, will focus on Tony Toretto, the younger cousin of Vin Diesel’s Dom. He and his teenage friends are recruited by a government agency to infiltrate an elite racing league tied to a criminal organization. Slated to stream globally on Netflix later this year, the series is executive produced by Diesel and Chris Morgan, who’s written and produced multiple installments in the Fast & Furious canon. Tim Hedrick (Voltron: Legendary Defender) and Bret Haaland (All Hail King Julien) are showrunning. 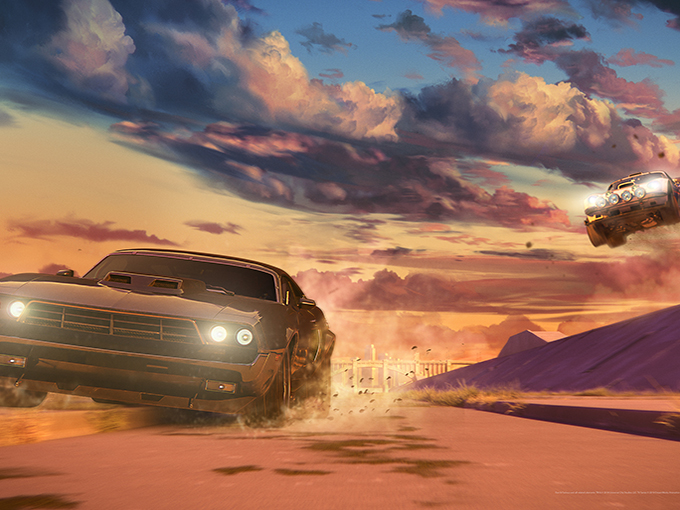 Netflix greenlit both projects after extending its multi-year, exclusive original content deal with DreamWorks in 2018 to include Universal film properties. (DreamWorks Animation was acquired in 2016 by Comcast NBCUniversal for US$3.8 billion.)

According to DWA TV chief creative officer Peter Gal, the inclusion of Universal in its Netflix deal gave the Glendale, California-based producer an opportunity to reassess where its shows are tonally, as it seeks to reach the widest audience possible.

“When we looked at adapting Fast & Furious and Jurassic, we questioned whether we should age them down for TV animation or stick closely to the tone of the features,” Gal says.

In its research on Fast & Furious, in particular, DWA TV found that parents almost universally said they like the brand for their kids, especially its stance on loyalty and putting family first.

Based on that feedback, and the fact that the Jurassic Park franchise has been a kid and family phenomenon since its inception, DWA TV, Universal and the IPs’ filmmakers decided to stay as close to the tone of the movies as they could.

“What Spy Racers borrows from the features are the core attributes that make the franchise so popular: cars, adrenaline, diversity, family and global appeal,” says Gal. “We’re adding custom vehicles and gadgetry that will appeal to kids—like paintball guns, cloaking technology, rocket boosters and net launchers. We’re not carrying anything over that wouldn’t be appropriate for six- to 11-year-olds. In terms of older appeal, our leads are 13 to 17 years old, so there is a wish fulfillment element at play.”

Though Spy Racers and Camp Cretaceous might seem like departures for DWA TV to some, the producer has been developing more mature, serialized storytelling for kids since the launch of Guillermo del Toro’s original series Trollhunters and Voltron: Legendary Defender reboot on Netflix in 2016. Both shows, plus newer reboot She-Ra, feature primarily teenage characters.

The tween focus is in line with much of what Netflix has commissioned to date, according to recent analysis from London-based market research firm Ampere Analysis, which found that the SVOD’s existing kids catalogue is mainly aimed at children ages seven to nine, but its original productions usually target the 10-to-13 demographic.

Gal, who was recently upped from EVP of development to his current role, says that DWA TV’s content strategy dates back even further—all the way to 2014 when All Hail King Julien, DWA TV’s prequel series based on DreamWorks’ Madagascar film franchise, launched on the streamer.

“All Hail King Julien had a lot of physical comedy and connected on a six-to-nine-year-old level, but it also offered a fair dose of sophisticated comedy and some social commentary that ages a bit beyond what the series would have at a traditional linear kids network,” says Gal. “In today’s streaming world, the traditional demos aren’t as relevant. You’re not making a show to meet an advertising demo of two to five, six to 11 or nine to 14 anymore.”

Gal adds that the producer’s strategy for targeting audiences is also connected to how DreamWorks Animation uses four-quadrant filmmaking to develop its features. (A four-quadrant movie is one that attracts both male and female audiences, both over- and under-25.)

“We chose to use the strategy in the same way that DreamWorks does for features. We develop shows that we fall in love with from great creators, and we try not to twist them to fit an exact demo. It sometimes means a show ages up slightly.”

This will likely fit the evolving needs of today’s streaming buyers. With the impending launches of Disney+, Apple TV+ and WarnerMedia’s HBO Max, the shift toward new approaches to demo targeting will only accelerate. According to Gal, DWA TV also expects to produce shows for NBCU’s upcoming, and still unnamed SVOD, which is set to launch in April 2020.

“With the proliferation of buyers, there’s no limit to the number of places we can sell content to,” he says. “It’s one of the biggest reasons to expand into new demos.”

While Spy Racers ages down the Fast & Furious brand—but super-serves an older kid audience—DWA TV’s upcoming Dragons Rescue Riders is the first preschool chapter to emerge from DreamWorks’ popular How to Train Your Dragon
(HTTYD) franchise. The CG-animated series features twins Dak and Leyla, who were raised by dragons and can communicate with them. Jack Thomas (Dragons: Race to the Edge, The Fairly OddParents) and Brian Roberts (VeggieTales in the House) are executive producing.

Overall, DWA TV currently has eight preschool shows in production and 15 to 20 in development. EVP of preschool Teri Weiss says aging down the How To Train Your Dragon brand will help a new generation of kids discover the IP and grow with it over time. 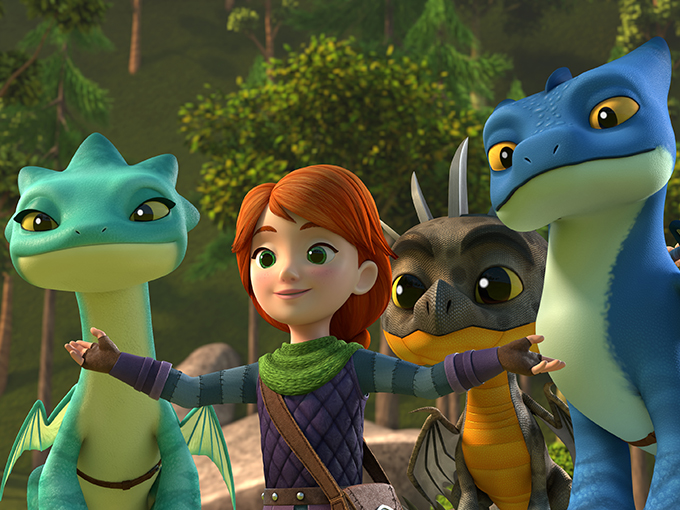 DWA TV is aging down its How To Train Your Dragon franchise with the preschool series Dragon Rescue Riders.

And while the HTTYD franchise is a good match for preschool, Weiss says she doesn’t anticipate many Universal titles, which tend to skew toward grownups, will expand into the demo.

“There is a real opportunity for all of the Universal franchises in the six-plus demo, but most of what we’re developing for preschoolers will be book-based or original concepts like Gabby’s Dollhouse,” she says.

To facilitate the breaking of silos between teams, DreamWorks made changes earlier this year to its upper ranks, most notably giving DWA TV president Margie Cohn an additional role as DreamWorks Animation president, heading up both film and TV operations. Along with promotions for Cohn and Gal, former Universal Pictures EVP of production Kristin Lowe was named chief creative officer of features, another newly created role.

Though DreamWorks’ film and TV production units operate separately under Cohn’s oversight, Gal says there is a new level of collaboration and sharing between the studios that didn’t previously exist.

“For example, a pitch could go into features, and they could say, ‘We don’t think it’s a movie right now, but TV should take a look at it,’ and vice versa,” he says.

Looking toward the future, Gal says DWA TV is developing a couple of adult animated concepts that could potentially expand its audience even further.

“We now have several hundred incredible writers and artists at the studio, so people are coming in with ideas that definitely reach beyond our current demographics and are more in the adult space,” he says.

The studio is also looking more closely at shows with fewer episodes per season than the typical 26 half hours for animated TV series (around eight, for example), and larger budgets similar to those for Netflix series like Lost in Space or A Series of Unfortunate Events.

“We want to continue to break out of a traditional kid demo on special projects, not unlike what we’ve done with Trollhunters and Dragons: Race to the Edge, which have both become global co-viewing phenomena,” says Gal.