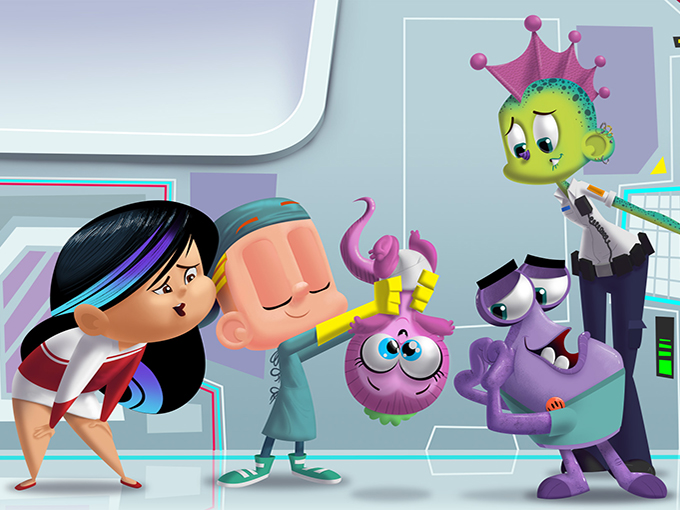 Nickelodeon has entered a content partnership with Atlanta-based Tyler Perry Studios to develop and produce a new live-action comedy series starring 10-year-old rapper Young Dylan (All That). Written by Perry, the untitled series looks at what happens when an aspiring hip-hop artist suddenly moves into his aunt and uncle’s house. The new content deal is an extension of Tyler Perry’s agreement with Viacom to produce original series exclusively for its networks, as well as launch a new streaming service BET+.

Studio 100, it’s owned subsidiary New York studio Little Airplane Productions and Chinese prodco Fantawild Animation are partnering to invest in and create the new animated comedy series Doctor Space (pictured). Targeting kids four- to seven-years-old, the 52 x 11-minute series will take kids to space, where a nine-year-old doctor and his wacky team run the galaxy’s first and only emergency room for aliens. Set to be introduced at MIPCOM and MIP Junior, the series features a curriculum focused on learning from ones mistakes and helping others.

Amsterdam-based prodco Submarine has appointed France’s APC Kids as the global distribution partner for its new animated preschool series Huggleboo (26 x seven minutes). APC has secured the first sale for the series with Israeli’s HOP!, with its launch on the kidsnet planned for 2020. Commissioned by Dutch broadcaster KRO NCRV, Belgian channel Ketnet and co-produced with Dutch indie prodco BosBros, the series is a 2D-animated series featuring photo-realistic images and cut-out animation techniques. Huggleboo revolves around a young girl who experiences small adventures by finding simple things in her home and daily life.

French distributor Superights has picked up Geneva-based prodco Nadasdy Films’ new series Maely’s Mysteries (52 x 13 minutes). As part of a worldwide distribution agreement for the show, Superights will present the series at MIP Junior. Based on a book series written by Christine Pompeï and illustrated by Raphaëlle Barbanègre, the new show is in production and follows an adventurous ten-year-old girl who solves riddles and mysteries with her best friend.

Finally, Google has teamed up with American education-based nonprofits DonorChoose and Playworks to help kids learn about being kinder online. Throughout October, Google is running the “Google Be Internet Awesome” program to teach kids that it’s cool to be nice to people in real life and online, while earning rewards for projects through DonorChoose.org. At the same time, Google and Playworks will promote lessons of kindness through a series of events in elementary schools in the US and will launch online game Interland, about being kind to people. The events culminate in Washington, D.C. on October 30 with an effort to engage Congress members about creating systemic change around cyberbullying. The program is expected to reach more than 4,000 classrooms and 40,000 students, according to Google.