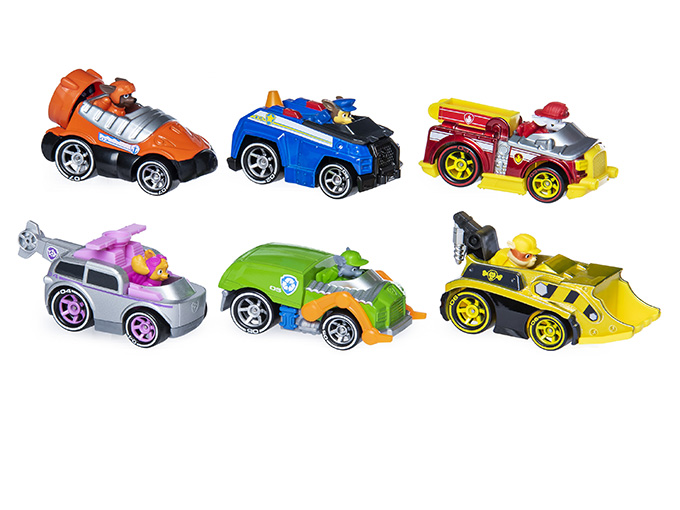 Cars, dinos and dairy? Spin Master and Viacom dish on the IP's theme-driven strategy and what to expect for the popular show's seventh season.

The latest deals come on the heels of VNCP’s exclusive partnership with Walmart in the US and Canada for the franchise’s latest 44-minute DVD, PAW Patrol: Ready, Race, Rescue, and a special edition product line, including toys, apparel, accessories, footwear, home, health and beauty, tied to the home entertainment release. The DVD and the new products launched earlier this month and will be available in most markets next year.

“Mighty Pups was so successful we decided to expand into a full season of themes this year,” says Roberto Stanichi, VP of marketing and global business unit lead for preschool at Spin Master. (Previous seasons featured single themes like Jungle Rescue and Sea Patrol.) “Mighty Pups was the first time the characters assumed different identities, which opened up a lot of opportunities for us from both a storytelling and a product development perspective.”

As for new product launches tied to Ready, Race, Rescue, Spin Master is introducing die cast vehicle toys for the first time. “The strategy deals with the life cycle of consumers as they go through the brand,” says Stanichi. “As we continue to manage PAW Patrol for the long term, die cast was a natural expansion for us to appeal to the slightly older consumer, kids ages four to five, within the franchise’s target demographic.” He notes that several of the new die cast items, which launched last month, are currently among the company’s top performing toys across the entire PAW Patrol range.

PAW Patrol is also making a bigger push into consumer-packaged goods, says Charlotte Castillo, SVP of global franchise planning at VNCP. “In the US and worldwide, a big category we’re seeing a lot of growth in is [consumer-packaged goods],” says Castillo. “PAW Patrol is cutting through because our partners aren’t just overlaying the characters’ faces on the packaging. They’re actually incorporating the DNA of the IP into the product by manufacturing paw-and pup-shaped items so the brand is instantly recognizable to kids.”

Castillo adds that PAW Patrol is also getting into global theatrical releases and activations for the first time. Internationally, Ready, Race, Rescue will launch with promotional windows in cinemas from fall 2019 through 2020 prior to its DVD release. It follows successful cinema activations for PAW Patrol: Mighty Pups in Canada, Europe, Latin America and Australia.

“It’s about bringing new preschoolers into the fandom,” says Castillo. “Onsite there are sampling opportunities and in some cases we have the walk-along characters show up.”

Looking ahead to the small screen, PAW Patrol’s 26 x half-hour seventh season will add a dinosaur theme to the mix. New Dino Rescue episode air dates are yet to be announced, but associated consumer products are expected to hit shelves in fall 2020.

According to The NPD Group’s Retail Tracking Service, PAW Patrol generated nearly US$1.4 billion across entertainment categories (including DVDs, books, toys and video games) from 2015 through the end of 2018. The brand ranked seventh among total toy revenue in 2018, up from 14th in 2015.