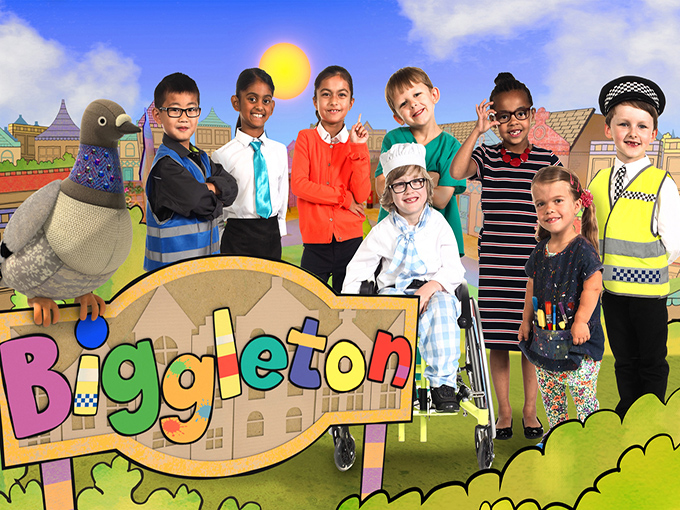 A pair of BBC preschool shows have been picked up for distribution, while KiKa, Gloob and Sky Kids all snag new programming.

London distributor CAKE has picked up the rights to CBeebies series Biggleton (pictured). The live-action preschool series is developed and produced by BBC Children’s In House Productions and takes place in an imaginary town where a cast of five- to seven-year-olds inhabit their own version of a grown-up world. The 50 x 11-minute show first aired on CBeebies in 2017 and has completed two seasons, which CAKE now holds the international distribution rights for, excluding the UK and Ireland.

Jetpack meanwhile, has acquired the international distribution rights to another CBeebies show The Baby Club. The 40 x 15-minute live-action series shows what activities community baby groups all over the world take part in and is led by a host who encourages viewers at home to take part as well. It is produced by Three Arrows Media in association with Tiny House Productions and CMP Productions. Aimed at six- to 18-month-old babies, it has consistently rated in the top-10 shows on CBeebies since its launch in May.

German free TV broadcaster KiKA has picked up Igloo Films new animated series Peek Zoo, set to premiere next year. Monster Entertainment distributes the show, based on a bestselling book series published in 17 countries by Templar Publishing/Candlewick Press. The 26 x seven-minute show for four to eights was commissioned by RTÉ.

The German broadcaster also picked up French animation studio Millimages series Molang to premiere on October 8. In its third season, the 157 x 3.5-minute show already airs in the region on Disney Junior, and on streamers through Netflix and Amazon Prime Video Direct. The preschool series features a friendship between a rabbit and a shy chick.

Brazilian broadcaster Gloob has picked up the exclusive broadcast rights in the region for Sinking Ship Entertainment’s sci-fi series Endlings. Launching in 2020, the 12 x 22-minute live-action series is set in the near future and has already been picked up by Hulu and Universal Kids (US), CBC and SRC (Canada), CBBC (UK), NDR (Germany), ABC (Australia), SVT (Sweden) and NRK (Norway).

British broadcaster Sky Kids has picked up the non-exclusive SVOD rights for CTC Media and Studio Metrafilms Kid-E-Cats in the UK and Ireland. Season one launched on Sky earlier this month and season two will follow in March 2020.

Following three kittens, the original series is in production on a third season following a CTC commission last year. APC Kids distributes the show, and has sold seasons one and two air to Nick Jr. internationally for more than 170 territories.