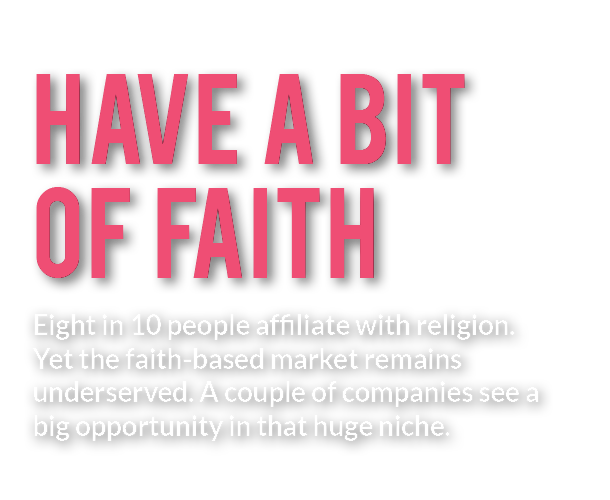 Weekend read: Have a bit of faith

Eight in 10 people affiliate with religion, but the faith-based market remains underserved. A couple of companies see a big opportunity in that huge niche.

We are living in a spiritual world, and the numbers bear that out. Eighty-four percent of all the people on Earth are affiliated with a religious group, according to the Pew Research Center. (Pew even found that 35% of people who identify as atheist or agnostic pray at least once a week.) Yet religion often remains in the background on screen.

Developments have been made at the North American box office, where half a dozen Christian-themed features have topped US$50 million in the past five years, including this year’s Breakthrough, which recounts the story of a mother praying for her son’s recovery from a near drowning.

There is a push to produce stories serving other faiths as well. Netflix has put out a call for its teams to work on an animated preschool series that explores the world of Hindu deities and culture, while Disney Channel hit Andi Mack spends considerable time tracking the character Cyrus as he prepares for his bar mitzvah.

Undoubtedly parents want their kids to watch shows that align with their values, and the violence and language on Netflix’s phenomenally popular Stranger Things might not feel appropriate. That represents an enormous potential audience for faith-based content—billions of viewers that independent broadcasters, online platforms and producers see as underserved. And they are looking to fill the programming gap.

According to California-based Trinity Broadcasting Network (TBN), touted as the world’s largest religious broadcaster, aspects of mainstream programming that concern parents are not so much ideological issues—such as same-sex marriage—but rather bad actions for which there are no consequences, kids disrespecting their parents or too much emphasis on superficiality.

“Parents are saying, ‘I wish there was something else,’” says TBN marketing director Nate Daniels.

TBN aims its programming at followers of various branches of Christianity. According to Pew, there are 2.3 billion Christians in the world, many of whom TBN reaches in 175 countries and 14 languages on 32 stations. That’s a lot of families and kids.

And the faith-based program that has entertained them the most is VeggieTales, a now-classic animated franchise featuring talking fruits and vegetables who teach children to deal with problems by referencing the Bible. Launched direct-to-video in 1993 by Big Idea Productions, the IP has spawned two theatrical features and was adapted into a TV series for NBC in 2006. In 2014, Netflix began offering the new VeggieTales in the House, which ran for four seasons, followed in 2017 by two seasons of VeggieTales in the City. 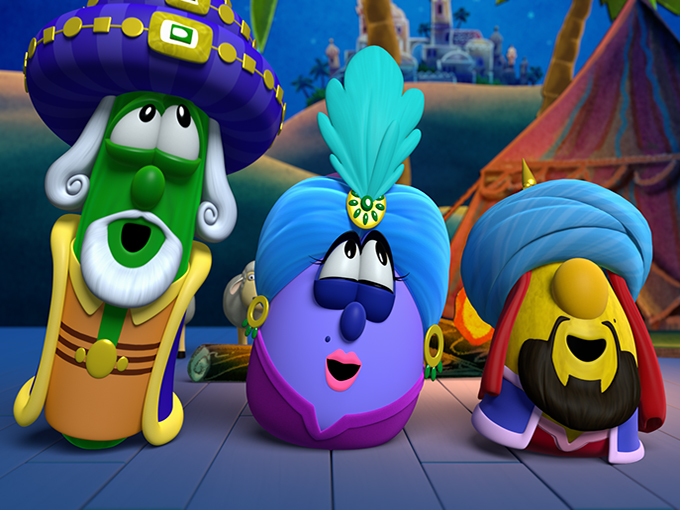 Fresh VeggieTales will be available later this year, including new episodes and a special.

Now owned by DreamWorks Animation, the franchise will resurface this year when TBN airs a Christmas special followed by more new episodes, with Universal Pictures Home Entertainment handling DVD and digital-download distribution. While the property—which has amassed nearly 15 million views for individual videos on YouTube—has thrived in the transition to digital, it remains an anomaly.

“There hasn’t been anybody else who’s taken up the mantle and created [Christian content] that is accessible to kids on demand or through streaming,” Daniels says. So when TBN launches its still-unnamed kids SVOD later this year, programming will be heavy on VeggieTales episodes old and new.

“It’s going to be a tentpole program for us, but we’re going to develop content alongside of it,” Daniels adds. TBN will produce some of its own shows, and has been in talks with Winnipeg’s Flipside, which offers motion-capture software to create real-time animation with Oculus Rift and HTC Vive systems.

Other religious broadcasters favor programming that isn’t exclusive to their faith, like Utah’s BYUtv, operated by Brigham Young University, which is in turn owned by The Church of Jesus Christ of Latter-day Saints (whose followers are more commonly referred to as Mormons). The channel reaches 50 million US households through cable and satellite, and more through its website and apps. BYUtv aims for a broader audience than only church members (which number an estimated 16 million worldwide) and schedules its religious block mostly between 7 a.m. and 9 a.m. through the week and until 2 p.m. on Sundays.

“The church has outlets such as the Mormon Channel to service its members,” says Michael Dunn, managing director of BYU Broadcasting. “We’re an outward-facing element that is non-proselytizing, family-focused and values-oriented in an effort to get good things out there in the world in contrast to the otherwise ever-darkening media landscape.”

The channel has traditionally not offered pure kids content, instead favoring live-action acquisitions such as Marblemedia’s Just Like Mom and Dad and Splatalot!, as well as BBC’s Serious series of youth adventure shows, which suit its family co-viewing strategy.

At the February Television Critics Association press tour, BYUtv announced 21 new or returning series, including its original Dwight in Shining Armor, an adventure-comedy about a teen who inadvertently brings ancient people and creatures into the modern world. Amid the laughs are soft-pedaled messages such as “diplomacy trumps battle.” The show has been picked up by Paramount for international distribution and has landed on Group TVA and Videotron in Canada, as well as France, Monaco, Andorra, Mauritius, Belgium, Switzerland, Luxembourg, Maghreb and Sub-Saharan Africa through Canal J.

Meanwhile, veteran producer Rob Hudnut believes that, more and more, religious content has the potential to cross borders and succeed around the world.

At Mattel, Hudnut executive produced 28 titles for the Barbie franchise, and now as an independent has three faith-based projects in the works: an original animated movie with Universal 1440 Entertainment, an unannounced franchise with a Canadian studio, and a live-action concept for tween/teens set to launch this year.

Based in Los Angeles, Hudnut comes from a family of Presbyterian ministers and is active in the church. He says the Barbie videos, while not explicitly Christian, always had values-based messages.

“Now I’m doing that in a more overt, faith-based way for families that can’t find enough of that type of content,” he says. “Some stories are based on people in the Bible, some use scripture, and others show people of faith making a difference in today’s world.”

After the English-speaking world, Hudnut sees strong secondary markets in Brazil and Mexico, which have an estimated Christian population of 181 million and 108 million, respectively. Africa, meanwhile, has 631 million Christians according to the Gordon-Conwell Theological Seminary—a number that’s growing fast. “This content can travel,” Hudnut says.

Getting this kind of content on traditional broadcasters has proved challenging. Although NBC aired VeggieTales, it instructed the producers to remove references to God and the Bible as it didn’t want the series to offend or exclude any other religious groups, resulting in backlash from Christian pundits.

This is consistent with feedback Hudnut has heard. “Traditional broadcasters have told me they’re not interested in faith-based series,” he says. “They’re trying to reach the broadest possible audience.”

Thus Hudnut sees YouTube as an ideal platform for some of his titles, along with SVODs and religious broadcasters such as TBN. Netflix, for one, has indicated a desire to beef up its faith-based slate. It currently offers dozens of adult-skewing movies and series and a handful of kids titles under a “Faith and Spirituality” category.

Other services, such as Canadian SVOD Muslim Kids TV, balance secular and religious content. Co-founder and CEO Michael Milo noted a dearth of Muslim children’s shows in the Middle East while working at Islamic broadcaster Huda TV in Egypt.
After conducting research across Turkey, India, Pakistan, Bangladesh and Malaysia, Milo found this lack of content to be widespread. And that was a significant lost opportunity, given that there are an estimated 1.8 billion Muslims, making it the world’s second-largest religion (as well as the fastest-growing).

Having returned to Canada in 2008, Milo and his wife Flordeliza Dayrit started producing the kids show Hurray for Baba Ali for Huda, teaching manners to preschoolers. They launched Muslim Kids TV six years later, and given the lack of relevant content, made their own live-action, animated and puppet-based programs. Their budgets for original animation have been around US$7,500 per six- to 12-minute episode and US$75 per interstitial.

“It was a monumental task to be the sole producer of content,” Milo says. “So we’ve been acquiring faith-based Muslim programming wherever we can. Our programming covers a wide spectrum, and includes educational and universal values-based shows that we’re acquiring from producers around the world.”

The SVOD typically picks up second-window or digital rights. Content ranges from Magic Lantern—in which Russia’s Parovoz studio adapts literary classics for young kids—to self-produced animation Maruf and Maryam, in which a boy and girl serve as guides to “explore Allah’s great world.”

Its non-religious content must not run counter to the beliefs of its core audience, spread across 60 markets. Don’t expect to find anthropomorphized pigs, for example, as the Quran regards the animals as impure. “Muslim parents would not approve of their kids watching that kind of programming,” Milo says.

While Muslim Kids TV does not publicize subscriber numbers, Milo says it saw a 500% year-over-year jump in its subscriber base in Western markets in the last quarter and is attracting upwards of 2,000 users per day in Malaysia, where it recently launched through an arrangement with telcos.

Public broadcasters serve a mixed demographic and often shy away from religious shows, but they do want to educate their audiences about various faiths. The BBC previously committed to more shows exploring “religion in all its forms.” And Canada’s CBC is thinking the same way.

“CBC Kids has a mandate to reflect all Canadian kids. While we don’t offer what could be called faith-based programming, we do feature content that helps inform about the ways kids and families around the country practice and express their faith and cultural traditions,” says Marie McCann, CBC’s senior director of children’s content.

The pubcaster runs stories on its CBC Kids webpages explaining Indigenous powwows, Ramadan and the Hindu Holi celebration, while interstitial show Studio K features a video with puppets in a rap battle about why Hanukkah is “lit.”

But reflecting the broader population while super-serving the needs of faith-based communities, often considered niche by broadcast standards, is a fine balancing act. One need only look at the difficulties encountered by California studio BimBam to see that content-makers serving smaller bases will find viability more challenging.

BimBam made Jewish educational videos for kids and adults for YouTube and apps. A non-profit that relied on corporate and individual donors, it shut down operations in the spring after more than a decade. 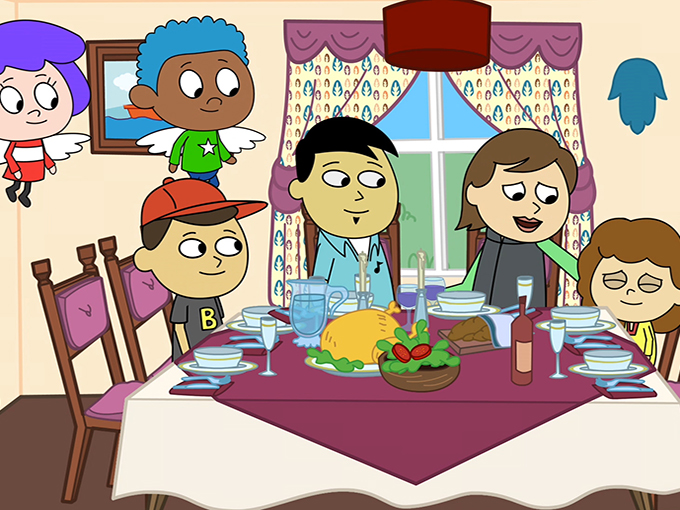 “We knew this was never going to be supported in a traditional distribution model, so we decided to be philanthropically driven,” says BimBam’s founding director Sarah Lefton. “We had terrific support, but things slowed down. There’s only so long you can ask the same foundations to support your work.”

Estimates peg the global Jewish population at under 15 million, with 6.6 million in Israel, although BimBam’s target audience is only a fraction of those. “Israel is largely a secular country. The level of interest in programming about religion and spirituality is the same there as it is in North America,” Lefton says.

BimBam’s kids offerings began in a more religious vein—including animated stories from the Hebrew Bible—but later incorporated the more values-based Shaboom! Since shuttering, it has pledged its content library to the Union for Reform Judaism, and Lefton now works as an indie producer.

She suggests producers from various religions come together to create some sort of production and distribution super-hub, thereby gaining critical mass.

“I dream of working together on an interfaith initiative,” she says. “We all have similar goals and creative energy, and there’s a lot we can learn from each other. We’re all working at the same time to make the world a better place.”