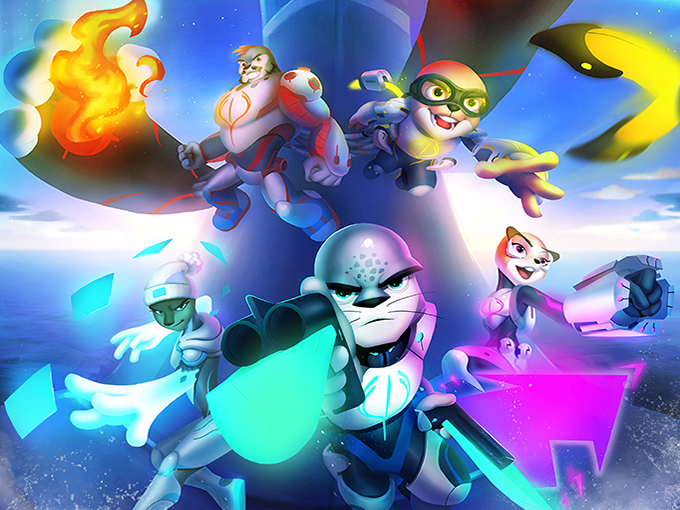 To start, CPLG is going to focus its efforts on the Ghostbusters franchise, with new products, events and collaborations in anticipation of the new Ghostbusters movie set for summer 2020.

Created by Caldera Creations’ founders and cousins Paul and Rob Caldera, five arctic seals are mysteriously mutated into human form and assemble to stop a shadowy organization from destroying the world.

Aimed at kids six- to 10-years-old, the 26 x 22-minute animated series is expected to be delivered in 2022, according to a spokesperson from Hoho. The Calderas chose seals as the protagonists after considering cute animals that hadn’t already been turned into icons, Paul said in a statement.

Pinna has also licensed the first two seasons—24 episodes containing more than six hours of content—of the Tara Tremendous podcast for distribution on its streaming platform.

Created, written and directed Stewart St. John, the podcast series is aimed at kids three- to 12-years-old. The first episode of the new season premiered on Monday, with new episodes rolling out weekly and exclusively on Pinna’s streaming subscription service. The premiere episode is also available at Wonkybot’s site, along with the official video trailer. In the new season, Gen Z superhero Tara Tremendous finds herself at the center of an ancient Egyptian mystery that threatens to destroy the entire world.

This is the first co-production venture for Wonkybot Studios since it announced its audio-first strategy to create family-friendly franchises. Wonkybot is developing several other original family-themed scripted podcast and audio series created in-house, and is in discussions with other studios and independents looking to hire them to produce audio series based on their IP.

As part of the campaign, Cartoon Network is airing a new PSA across the US, with a call to action for kids to include others. The companies are also launching online resources and a website that will track and highlight nationwide participation. “Include Someone” will also roll out with a kit that features a poster, educators guide and stickers to reward kid’s inclusion efforts.

The new campaign follows recent research commissioned by the kidsnet, which found that 58% of kids nine to 11 don’t know what to do or say when they see another person get picked on for be left out. Cartoon Network and 826 National have also co-created an inclusion-focused storytelling lesson plan for elementary and middle school students, that’s available online.

826 National and Cartoon Network are also expanding the Inclusion Storytelling curriculum in 2017 through a contest, which invites participating educators at qualifying schools to win a school-wide storytelling event focused on creating, sharing, and celebrating stories of inclusion, with the winning school’s authors getting to create a publication.