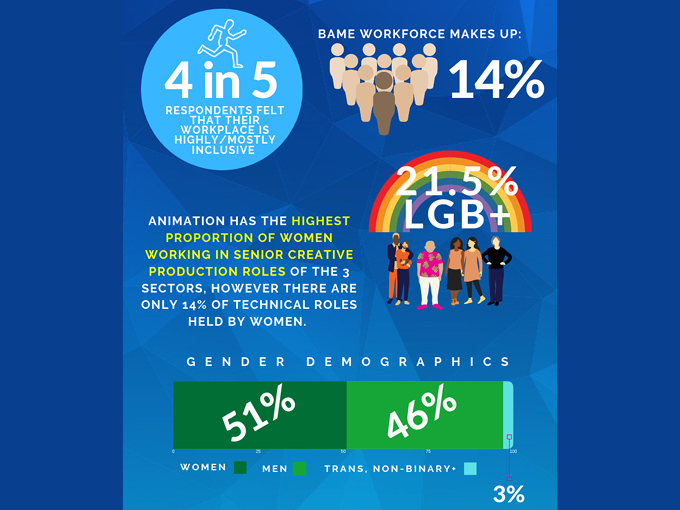 While more and more women are joining the field, people of color remain underrepresented in the animation sector.

The UK’s animation industry has reached parity in terms of gender diversity, with 51% of workers being women, but it needs to address the underrepresentation of people of color—particularly in creative artist roles—a new inclusion and diversity study has found.

The report finds that the VFX, post-production and animation sectors in the UK are doing better than the overall level of diversity, or lack of it, within other areas of the film and TV industry, but more work needs to be done to improve diversity in the creative industries.

Black, Asian, and minority ethnic (BAME) representation is only 17% within creative artist roles in animation and less than 10% for both senior management and senior creative production roles (The report breaks down representation by department, not specific titles like CEO or president). Of the three sectors the report analyzed (animation, VFX and post-production), animation is the least diverse with BAME representation at 14%, versus 19% for VFX and 18% for post-production.

However, all three sectors equal or exceed the 14% UK average percentage for people of color in the working-age population. And according to UK Screen Alliance CEO Neil Hatton, animation’s BAME representation only marginally misses a regionally weighted percentage (16%) when London’s 40% BAME population is taken into consideration.

“Animation companies are widely distributed across the country so 16% is a fair target for BAME representation if we allow for local, national and international recruitment of skilled talent,” Hatton says. In addition, 81% of respondents in animation classed their workplace as highly or mostly inclusive. The report states that this is a sign that many employers are taking the right steps towards creating a welcoming environment for a diverse workforce.

Meanwhile, the study found that in production management, women make up 89% of the animation workforce. In senior creative production roles, 55% are women, while in creative artist roles, such as animators, riggers, modelers, technical directors, compositors and VFX artists, 49% are women. However, the area where there is the least proportion of women in animation is in technical support (14%).

The results of the report are similar to findings in a recent US study by Women in Animation. It found that women make up 50% of president, CEO and CCO positions at animation film companies, but women of color only represent just 6% of top-leadership positions. For animation TV companies, women make up 39% of executive roles, but only 10% are women of color (6% on the film side and 9% on the TV side).

Hatton says the group is optimistic in further improving BAME representation and expects to undertake a new report in two years.

“We will probably see a steady upward movement in the gender stats, but the BAME stats will probably take a little longer to move,” says Hatton. “In terms of the recruitment that we’re doing, we just got a new cohort of apprentices that’s 50/50 on gender and about 33% BAME. When you look at the figures for gender and BAME in the junior level roles, they are encouraging.”

Inclusion initaitives already underway in the UK screen industry include AccessVFX’s long-term schools outreach and careers advice program; its QVFX initiative to support LGBTQ+ workers in VFX and animation; and the upcoming and inaugural Rise Awards by advocacy group Rise: Women in  Broadcast.

The full UK Screen Alliance report can be found here.