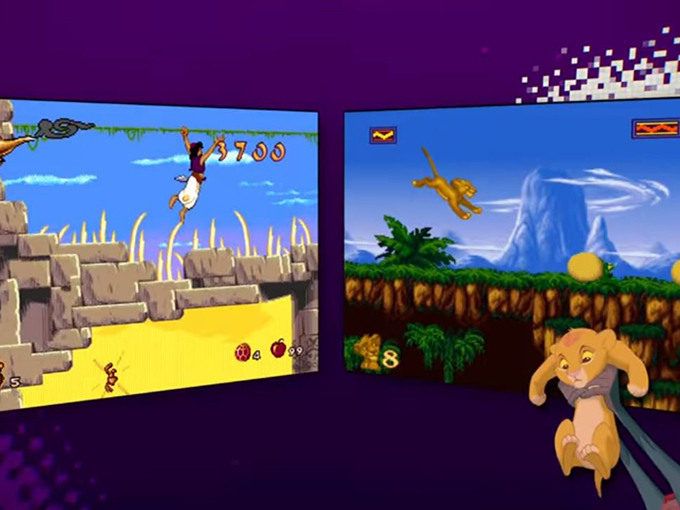 The games, playable on modern consoles, tap into the nostalgic popularity of the re-imagined Aladdin and The Lion King movies.

Disney is making old new again and bringing back the 16-bit version of its popular video games Aladdin and The Lion King combined into a single game for modern consoles.

Re-released for Nintendo Switch, PlayStation 4, Xbox One and PC, Disney Classic Games: Aladdin and The Lion King will include improved graphics and behind-the-scenes assets about the original games. New features include the ability to view full play-throughs and start playing the game at any point. It also lets players experience the original Sega Genesis, Game Boy and Super Nintendo Entertainment System (SNES) versions of the game.

Aladdin and The Lion King were popular side-scrolling games launched in the ’90s to supplement the animated films. Aladdin delivered one of the best sales of any Genesis game, with four million total units sold, according to SEGA.

It’s a fitting time for the new game to be released as live-action versions of both films premiered in theaters this summer. Since launching in May, Aladdin has earned US$1.04 billion worldwide. Meanwhile, The Lion King, which was released in July, has grossed US$1.5 billion worldwide, according to Box Office Mojo.

Retro games and consoles have been a popular consumer item for the past few years. Nintendo recently reported that its Nintendo Entertainment System: NES Classic and SNES: Super NES Classic Edition consoles, which were re-released in 2016, recorded total sales of 5.95 million units in the 2018/2019 financial year. In 2017 market research firm NPD reported that the NES Classic led hardware sales in the US and was the the second-bestselling console, behind the Nintendo Switch.