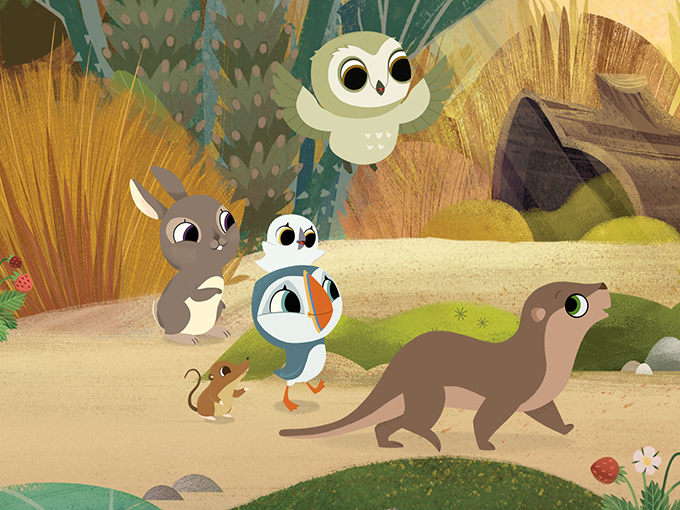 Inside Puffin Rock’s migration to the big screen

Studios in Northern Ireland have produced a number of popular animated kids TV series, including Little Roy (JAM Media), Lily’s Driftwood Bay (Sixteen South) and Pablo (Paper Owl). But no company, from the country best known for its Game of Thrones backdrops, has ever produced an animated feature film…until now.

In spring 2021, Derry-based media firm Dog Ears will break the mold with Puffin Rock Movie. The 80-minute UK/Ireland/China co-production is based on preschool series of the same name (pictured), co-produced by Dog Ears and Kilkenny-based Cartoon Saloon (The Secret of Kells, The Breadwinner). Penguin Random House, which published books based on the series, is the IP’s third co-owner.

Set off the Irish coast, the 79 x seven-minute series stars a pair of puffin siblings, Oona and Baba, who explore their natural environment with their parents and animal friends. After bowing on Irish pubcaster RTEjr and Nick Jr. in the UK in 2015, Puffin Rock secured Superights as its international distributor. Superights then landed deals with Netflix (worldwide) and ABC (Australia). In 2017, China Nebula Group (CNG) snapped up the TV, digital, merchandising and toy rights to the IP. Since then, the series has been streamed on Tencent more than 170 million times. Now, CNG has joined Puffin Rock‘s co-producers on the IP’s first theatrical release.

“The catalyst for the film is the Chinese market where Puffin Rock has been on Tencent for just over a year,” says Dog Ears’ creative director John McDaid. “Our Chinese partners were keen to produce a feature as it adds a lot of weight to the brand. Theatrical preschool content is very popular and expected in the Chinese market so we jumped at the chance.”

Currently in production, the movie finds the pufflings in a race against time to protect a small egg from a potentially devastating storm. Puffin Rock’s animation director Jeremy Purcell is directing. Dog Ears is handling the script, casting, music, voice records and some animation elements, Cartoon Saloon is on pre-production and design, while China Nebula Studio is building a production team with on-site support from animation supervisors and directors from both Irish studios.

Though McDaid won’t disclose the film’s budget, the feature is co-financed by CNG, private investors and state agencies Northern Ireland Screen and Screen Ireland. It also takes advantage of a 32% tax break from the Republic of Ireland and a 25% tax incentive from the UK, which both apply equally to feature and television animation.

McDaid says the co-production could potentially boost the emerging animation market in Northern Ireland, which has a population of only 1.7 million people.

“For such a small demographic, the industry here is maturing to a point where we have a number of studios doing world-class commercial work,” he says. “With the creation of quality original IP, and the retention of animation talent who may have relocated in the past, it feels like these factors are combining to make larger-scale productions, including features, more feasible.”

One of Northern Ireland Screen’s main objectives is for the sector to reach 20% of all UK production, making the region second only to London in production output. The agency’s report also found that Northern Ireland’s animation sector is approaching three-fold growth in the last 10 years.

Looking ahead, McDaid says it will be up to CNG and Superights to determine theatrical premiere dates for Puffin Rock Movie, which is being produced in English first and dubbed for the Chinese market. Linear and SVOD distribution has also yet-to-be determined. The IP owners aren’t forgetting about the show that gave the property its wings either, and hope to produce a third season down the line.