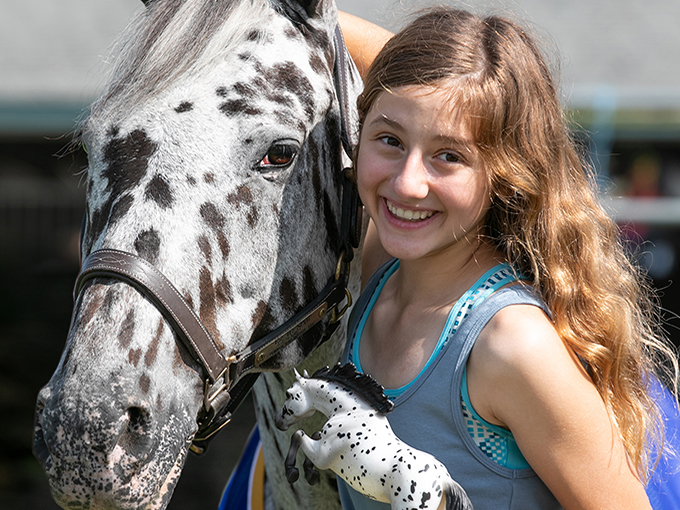 Breyer saddles up with Imagine for its first series

A dedicated fan base prompted the prodco to giddy up on a new 30-minute tween series with the 70-year-old toyco, says president Stephanie Sperber.

Ron Howard and Brian Grazer’s Imagine Kids & Family is continuing its aggressive initial moves into the kids entertainment space by saddling up with a hobby that has always been pretty popular with kids…horseback riding. To reach girls ages eight to 14, the prodco went straight to one of the experts in the field: American horse-focused toyco and event producer Breyer, that’s been around since 1950, to co-produce and develop a live-action equestrian-themed TV series.

Since Breyer is a usual suspect when it comes to creating horse-themed CP (the company teamed up with Netflix and DreamWorks to create model horses for the animated series Spirit Riding Free, which debuted on Netflix in 2017), the toyco is going to have a consulting role on the series. It will provide Imagine with insights on what equine-fans want to see in their stories. Breyer’s main focus is on authentically portraying horses and creating products that looks as close to real horses as possible (pictured), says Breyer’s EVP of brand and new business development Rick Rekedal. This is the first time Breyer has got on board with an entertainment company to develop a series, but the hope is that this isn’t the last, says Rekedal.

The companies first met at New York Toy Fair this past February, and began discussing creating a horse-themed show, says Imagine Kids & Family’s president Stephanie Sperber. (That is, coincidentally, also where Imagine met up with Viacom’s CEO Bob Bakish to discuss making its other new series Untitled Space Show.) Neither Breyer or Imagine went into the meeting with plans for a series, but after Breyer spoke about the its large fan-base, Imagine saw the potential. (Just last week, it hosted more than 30,000 attendees at its yearly convention, Bryerfest.)

“We get hundreds of hand-written letters sent to us a week, and there are hundreds of thousands of videos that Breyer fans post online of themselves with their horses. Through that we know there is a hunger for more horse-stories and we know what horse-people care about and values,” says Rekedal. “Horses are symbols of courage, grace, power, beauty and inspiration and these are universal things. There are so many horse-inspired stories we can tell to tap into that power.”

While Imagine could have gone to market on its own, part of its broader mandate is to partner with experts as it develops series, Sperber says. And since the 70-year-old Breyer has captivated more than three generations of girls with its products, it has an unparalleled breadth of insight into different demographics.

For example, while humans will play an obviously important role in the upcoming show, horses will be at the foreground, with an emphasis placed on their own social relationships, trials and challenges, and an element of magic will also help bring the animals to life, she adds. This insight comes straight from Breyer, who found that, among fans, the animals’ interactions and dramas are just as interesting as that of their owners and riders.

“We went to Breyerfest with an idea for the series but after talking to the fans, hearing that they wanted to see the relationship between the horses, and for the horses to be fleshed out characters, we’re rewriting what we had,” says Sperber.

To further develop the series, which will run in the 30-minute range, Imagine Kids & Family tapped Ashley Avis (Adolescence, Deserted), a former competitive equestrian rider and the writer/director of the upcoming horse-focused feature Black Beauty (scheduled for release in 2020) to lead the project as its showrunner. It plans to bring the show to MIPCOM in October and will shop it around the SVODs and linear broadcasters.

Imagine’s Kids & Family division just launched in January, and already the California-based prodco has lined up a large slate of new content. Earlier this month the prodco announced it was investing in its first digital IP, The Tiny Chef Show, with plans to expand that brand into a global franchise. This past March, it also teamed up with Little, Brown and Company’s publishing imprint JIMMY Patterson Books to develop five titles from author James Patterson for TV, film and digital platforms. To top it all off, the prodco partnered with iconic magazine LIFE to create TV content inspired by the publication.