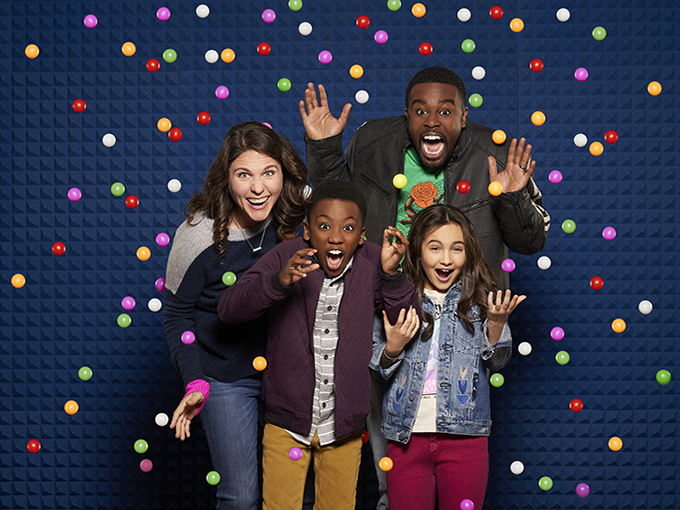 How Disney’s Just Roll With It came to life

From juggling multiple endings to audience plot-drivers, the creators break down how they wove interactivity into their new scripted/improv series.

With the renewal of its digital trivia show Disney QUIZney, and the launch of games and polls on its DisneyNOW app, the House of Mouse has been ramping up investment in interactive content. Now, it’s taking that interactivity to the next level with Just Roll With It, a hybrid series that blends improvisational comedy with a scripted family sitcom.

Filmed in front of a live studio audience, the multi-camera series is produced by LA-based prodco Kenwood TV Productions. The 21 x 30-minute series is targeted at six- to 11-year-olds and centers around a family that’s navigating everyday life while managing a radio station.

“Disney wanted to do a program that was like the old Saturday Night Live sketches where the cast members would be laughing the whole time,” says Trevor Moore, executive producer on the series. “They wanted something fun and that had a blooper reel quality to it. [We] started thinking about how to make a show where the cast was constantly being thrown off their guard.”

Like any scripted series the cast gets a script, which they study every week, but there’s also a secret script which they know nothing about. At certain, predetermined points a foghorn goes off and the audience votes on three different scene options, which the cast aren’t aware of ahead of time. After the set is rejigged, the cast return and pick up the story. To add a bit more chaos to the mix, the audience can add some unusual elements, such as a wrecking ball through a wall or a person falling through a roof, and the actors have to improvise and react until the series transitions into the next scripted scene.

“It’s crazy because we have to have all these things ready to go. Behind the scenes, we’ll have a snake handler, a guy with a bunch of baby pigs and someone with a jetpack,” says Moore. “Depending on what gets voted on, we’re like, ‘Alright, send the pigs home, send the snake home,’ and they’re just gone and the audiences don’t really see that.”

Co-created and executive produced by Adam Small and Moore, the new series is an evolution of the duo’s Walk the Prank, which melded scripted comedy with hidden camera pranks, says Moore. In that 60 x 22-minute show, four kids pulled pranks while going about their daily lives. It premiered on Disney in 2015 and was greenlit for a second season in 2016, as well as a third season in 2017. It was Disney XD’s top show in 2017, with 21 million engagements and more than 100 million total US viewer, according to the kidsnet. (Its first season had an average of one million viewers per episode, according to ratings aggregator ShowBuzz Daily.)

Disney Channel’s success with Walk the Prank led to the kidsnet to approach Moore and Small about making a new comedy series that would get everyone (cast included) laughing, says Moore. The co-creators started working on the pilot of Just Roll With It during filming of the third season of Walk the Prank, and spent a year producing the new show, he adds.

While the co-creators wouldn’t share the series’ budget, they said it was more costly to produce than a typical live-action show because of the number of stunts they have to prepare in advance.

“We have nine stunts in a show and only three will be used,” says Small. “It’s expensive to pull this concept off.”

The writers room is stacked with creators who have a background writing comedy, including Brandon Cohen (Walk the Prank), Erica Harell (Happyland), Jessica Kaminsky (Bizaardvark) and Desiree Proctor (Betch). Each week, a few are set on writing the scripted scenes, while the rest work on alternative endings, says Moore. It’s not a simple process, he adds: the audience-choice scenes, for example, all require three different ideas, as well as dialogue, that all still work with the overarching plot.

Yet, the interactive elements create something rewatchable about the series, says Moore. It’s also a type of interactivity that isn’t often seen in sitcoms or television, he adds. Sometimes the co-creators will say to each other, “‘Why did we come up with this show? This is so much work,’” adds Small. “But when you see it live and the cast is genuinely being surprised and the energy is real, it makes it all worthwhile.”