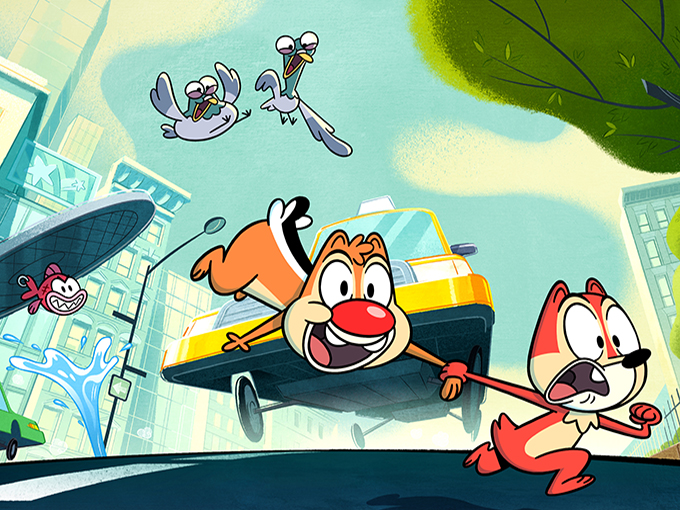 From a squirrely reboot to 101-plus pups, the House of Mouse revealed several new shows for its upcoming SVOD and renewed a few popular series at Annecy.

The House of Mouse has announced a raft of new productions for Disney channels and upcoming streaming service Disney+ as part of its presentation at Annecy International Film Festival yesterday.

The media giant revealed that it is in production on a non-verbal reboot of Chip ‘n’ Dale (pictured), set for global release as a Disney+ original. The 39 x seven-minute series will feature the chipmunk brothers living life in a big city. It was developed by Disney’s London-based animation team in collaboration with Paris-based Xilam Animation. Now being fully produced by Xilam, Chip ‘n’ Dale is directed by Jean Cayrol (Oggy and the Cockroaches) and produced by Xilam’s chairman and CEO Marc du Pontavice. All aspects of production, including scripting and graphic design, will be handled by Xilam in collaboration with Disney.

In addition to new shows, the House of Mouse is also giving viewers new episodes of fan favorite series like Miraculous: Tales of Ladybug & Cat Noir. The animated show from Zagtoon and Method Animation will return to Disney channels for seasons four and five. A new (and fourth) season of eOne’s hit preschool series PJ Masks is also being produced for Disney Junior.

Disney also announced the animated series 101 Dalmatian Street will be released on Disney+ in the US. The 48 x 11-minute series launched in Europe in March, and recently appointed Mattel as master toy partner with a range set to launch across on the continent this summer.

Disney also provided a first look at the upcoming Disney+ original series Monsters At Work. Inspired by Disney and Pixar’s feature film Monsters, Inc., the show is produced by Disney Television Animation with animation production by France’s Dwarf Animation. Monsters At Work is set to premiere on the SVOD in 2020 and will pick up six months after the original movie ended.

Disney+ will launch in the US on November 12, and the international rollout will continue over the next two years.