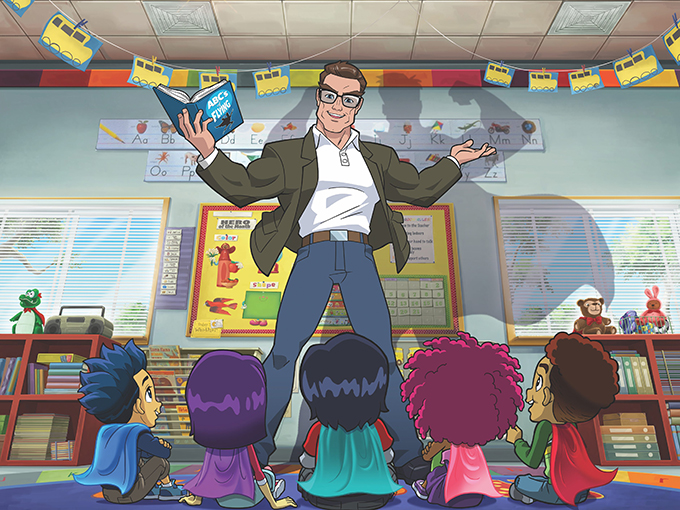 The Terminator tells Kidscreen why he's headed back undercover as a teacher, what role fitness plays in his new series and how Stan Lee's Superhero Kindergarten came to be.

He’s back. But rather than making another blood-pumping, explosion-laden action flick, Arnold Schwarzenegger is trying his hand at kids TV for the first time.

Schwarzenegger is partnering with Los Angeles-based producer Genius Brands International and Stan Lee’s prodco POW! Entertainment on new animated preschool series Stan Lee’s Superhero Kindergarten. The 52 x 11-minute series is expected to be completed fall 2020. Schwarzenegger will, naturally, voice the lead character, as well as serving as a co-executive producer. So come along…if you want to live (that’s from Terminator 2: Judgement Day in case you aren’t an Arnold super-fan).

Comic book writer and co-creator of the Deadpool IP, Fabian Nicieza, is scripting the series, based on an original idea created by Stan Lee last year before his death. As co-executive producer Schwarzenegger will work with Nicieza to create ideas, scenes and dialogue. Genius Brands’ chairman and CEO Andy Heyward will executive produce the series alongside POW! Entertainment’s president Gil Champion and Schwarzenegger through his prodco Oak Productions. POW! holds all of the rights to Lee’s IP, while Genius Brands is producing and distributing it.

The action-adventure show revolves around a gym teacher named Arnold Armstrong (Schwarzenegger) who had incredible powers, but lost them after a battle with his arch-nemesis Dr. Superior. Now, a few years later, children with superpowers are starting to surface and Armstrong has to work undercover as a brand-new kindergarten teacher to train the kids on how to use their powers for good.

Lee and Schwarzenegger spent a fair amount of time together as friends and one day Lee asked the Terminator star what his dream project would be, Schwarzenegger tells Kidscreen. In response, the former Governor of California said he would love to do work on another project like Kindergarten Cop. Directed by Ivan Reitman (Ghostbusters), the 1990 fish-out-of-water film earned US$201 million worldwide against a US$15 million dollar budget, according to Box Office Mojo. The action-comedy has some (intentionally) fundamental similarities with the new series—most obvious being that a character goes undercover as a kindergarten teacher.

“Stan came to me with the concept that I would be a superhero that no one knows, and I would be training kids who have superpowers,” says Schwarzenegger. “In a way, this is new for me, but in a way it’s not. I did films like Kindergarten Cop, Twins and Junior, and those were for kids. But this is the first time I’m doing something specifically for preschoolers and I’m really looking forward to that.”

Superhero Kindergarten is the last project Lee worked on before his death, according to Genius Brands, and every episode will feature a cameo from the prolific comic creator.

Beyond familiar faces, the show will focus on messages around the importance of fitness, health and nutrition because those themes have always been important to the former professional body-builder. But the series also deals ideas around inclusivity and will teach kids how to be better people, according to the EPs.

The show is taking these themes seriously, says Genius Brands’ Heyward, and at the end of each episode there will be a short PSA where Schwarzenegger will drive home the importance of topics like health, and fitness. The length and style of these shorts hasn’t been finalized, but will most likely be animated.

Heyward declined to give specific details about the series’ budget, but Genius Brands is kicking off promotion for Superhero Kindergarten at Licensing Expo in Las Vegas next month. No broadcasters have signed on yet, according to a spokesperson for the prodco.