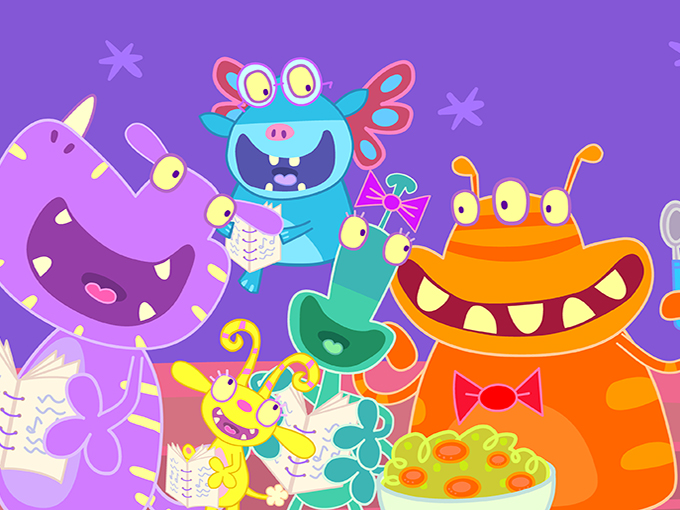 Discovery Kids LatAm has acquired the regional pay-TV and SVOD rights for Paris-based Cyber Group Studios’ animated series Sadie Sparks. The series is in-development and no air date has been announced.

A co-production between Cyber Group and Ireland’s Brownbag Films, the 52 x 11-minute show is aimed at six- to 10-year-olds. The comedy series is about a teenage girl who discovers she has extraordinary powers, but they can’t be accessed without partnering with a magical rabbit—who just wants to retire.

Cyber Group previously sold the series to Disney Channel EMEA, which plans to air it later this year.

The 52 x seven-minute 2D-animated series from UK-based prodco Dot to Dot explores a child’s first year in a school full of mini monsters. Created by Alan Robinson and executive produced by Jo Killingley (Dot to Dot) and Sarah Legg (CBeebies), the show has already been picked up by a host of international broadcasters, including RTP (Portugal), YLE (Finland), Universal Kids (US) and CBeebies (UK). ZDF Enterprises handles distribution and worldwide merchandising rights (excluding the UK and US). Season two is currently in development with 52 episodes planned to be released in 2021.

In other ZDF news, the company also announced at MIP this week that it is once again teaming up with Paris-based Cottonwood Media for a third season of Find Me in Paris. The live-action tween show will kick off principal photography in July.

Co-produced with Toronto-based Spin Master Entertainment, the series tells the story of a seven-year-old girl who helps creatures with unique abilities (called Fuzzlies) solve problems. The 26 x 22-minute episodes launched on Nick Jr. in the US earlier this year.

Konami handles distribution and management of the Yu-Gi-Oh! brand outside of Asia.

Previously the show was picked up by K2 (Italy) and Teletoon (Canada), and both began airing the show last year. Yu-Gi-Oh! VRAINS is the latest series in the Yu-Gi-Oh! franchise. For kids six and up the 2D-animated show combines virtual reality and artificial intelligence with classic card-game IP.