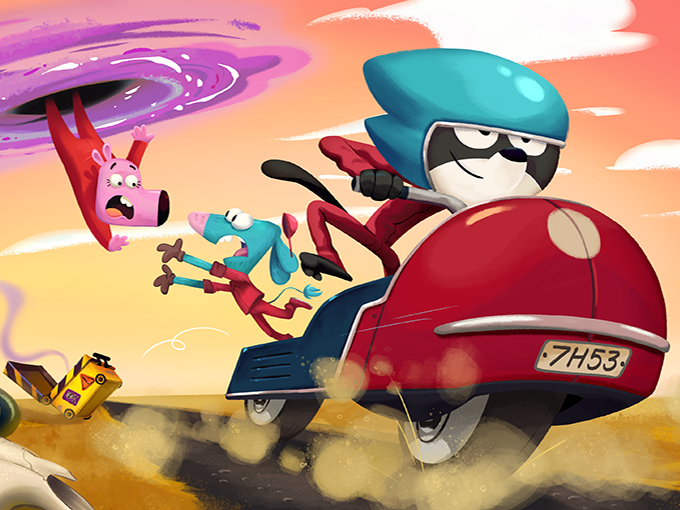 Aimed at a five- to nine-year-old audience, the series, about a delivery service that transports impossible items (including the Loch Ness Monster, a black hole, and a magic carpet), is still in the early phases of its development. However, the French prodco has already started pitching it to broadcasters and has been getting some positive responses, says Zephyr’s chief creative officer David Sauerwein.

Created by Gigglebug’s founders Anttu Harlin and Joonas Utti, Sauerwein was drawn in by the blend of the original concept and well-defined characters.

“The beautiful designs from Utti really made the project stand out, and made us want to develop the project and bring it to where it is now,” says Sauerwein.

The budget hasn’t been finalized as Zephyr waits to hear back from broadcasters before deciding on style and rendering.

“We are of course thinking about an animation test,” says Sauerwein. “But we believe the material we have right now is interesting enough to trigger some interest.”

While animation style hasn’t been decided on yet, the pilot script was written by Maria O’ Loughlin (101 Dalmatian Street) and the tone of the series has a slight edge and humor, says Sauerwein. The prodcos are building a second version of the series bible, and tweaking the script. Zephyr will be bringing Pronto to both MIPTV and MIFA.

Distributor APC Kids launched Zephyr in September to develop original kids projects and co-develop/co-produce properties with global partners. Its first series was Adoonga, a 52 x 11-minute animated comedy/adventure series for the six to nine audience, about a gorilla that moves to the big city. It is co-produced with South Korean studio Vooz (Pucca) and is expected to launch in 2021.

Also in the early stages of development is Gone Gills, for kids six and older, about three prehistoric creatures that find themselves stranded in present day. The original comedy-adventure series is created by another Finnish prodco, Ferly, and will be co-produced with Canada’s Yellow Animation. Zephyr is working on the design, bible and pilot script for this production and has plans to showcase it at Annecy Animation Festival in June.

“On one side we’re looking to sign deals and get into developments with exciting partners, and on the other hand we’re looking to create our own original content,” says Sauerwein. “We have good access to broadcasters through APC Kids and now we need to keep working on exciting projects.”