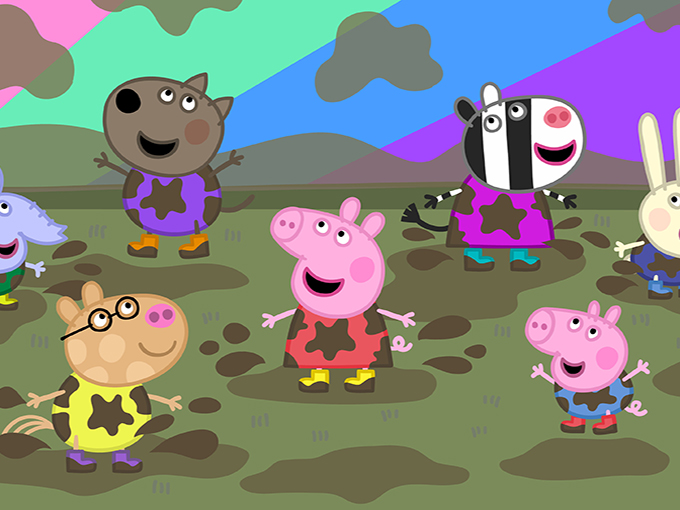 Peppa is set to celebrate her 15th birthday, rain or shine, with a new line of footwear, umbrellas and backpacks from the iconic boot maker.

Kids can channel their inner pigs and jump into muddy puddles with the new range of Peppa Pig-inspired consumer products. Entertainment One (eOne) and Edinburgh-based footwear company Hunter are building on the brand’s 15th anniversary promotional campaign with a limited-edition collection of footwear and accessories.

Aimed at ages two to five, the range will feature the show’s characters on rain boots (Hunter’s bread-and-butter), backpacks and umbrellas. Products will hit shelves in the UK, North America, Japan, Germany, Switzerland, Austria, Scandinavia, France and Italy in July. The recent announcement adds to eOne’s anniversary efforts, which to date have included partnerships with the likes of Character Options (plush, figures), Penguin (books), Redan (magazine specials) and Enseco (figurines).

eOne has been promoting Peppa’s birthday with a number of new initiatives, including 10 new episodes of the series, and a different two-part special about the characters attending their first-ever music festival, in April. The episodes will be combined into one film and get a cinematic release in Australia and the UK.

This year also happens to be the Year of the Pig in China, and the brand has been growing in the region with the recent CP deal naming Alpha Group as master toy partner to create play sets, figurines and role-play items, which launched at the end of 2018.  eOne is also capitalizing on the celebrations with a different two-part Chinese New Year special,  sold to Nickelodeon and several free-to-air broadcasters around the world. eOne also signed a recent partnership with leading Chinese e-commerce platform Tmall to sell its products and help sell its products.

Peppa Pig has been translated into more than 40 languages and is broadcast in 180-plus territories. The brand is a licensing powerhouse, with total retail sales in 2017 reaching US$1.2 billion for the little pig. Meanwhile, licensing and merchandising revenue reached US$59.3 million that same year, driven by growth in the US where L&M revenue increased by more than 170%. Last year, eOne’s Family & Brands business grew 29% to US$97.5 million in the first half of the year due to continued strength from Peppa, which was up 18%.