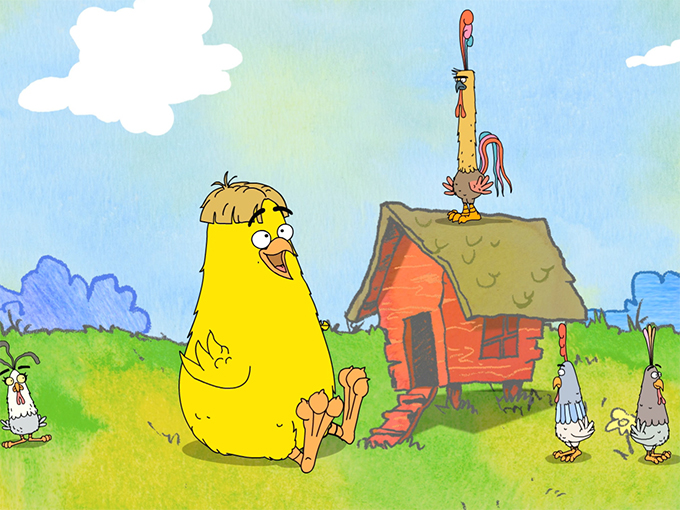 The two prodcos have teamed up to finance and launch the animated comedy series featuring top voice talent like Tom Kenny and Tara Strong.

Canadian producer/distributor Bejuba! Entertainment has come on board GraveRobber’s new animated comedy series Chicken Big. The two companies will work together to finance and launch the 52 x 11-minute show based on a kids picture book by Keith Graves.

Featuring the voice talents of Tom Kenny (SpongeBob SquarePants) and Tara Strong (My Little Pony, The Powerpuff Girls, The New Adventures of Rocky and Bullwinkle), Chicken Big looks at what happens when a gigantic bird gets introduced to a clueless flock.

Bejuba! first saw the project at Cartoon Forum in France last year, where LA-based GraveRobber stole the show, even though it was at the Forum for the first time and the lone American producer attached to an accepted international co-production. At the time, the prodco reported getting a lot of interest from broadcasters, distributors and investors.

GraveRobber was founded two years ago by Keith Graves and Rob Moreland as an outlet where they could create original animated content. Graves has also written Frank Was A Monster Who Wanted to Dance and The Monsterator. For his part, Moreland has written four animated feature films, including Happily N’Ever After, and was an EP on Netflix Original Gnome Alone.

GraveRobber is also working on an adaptation of The Monsterator; the Ann Ziety Show, which looks at anxiety and depression in a comedic way; and a series based on Graves’ novel The Orphan of Awkward Falls.

Bejuba! also has a lot on the go at the moment, having recently picked up distribution rights to Big Jump Entertainment’s new 2D-animated series Etta’s Star, which still needspartners and financingto move forward. The company is also working on CGI-animated preschool series Flora of the Forest in partnership with the UK’s Koko Rose Media and animation producer Yeti Farm Creative.