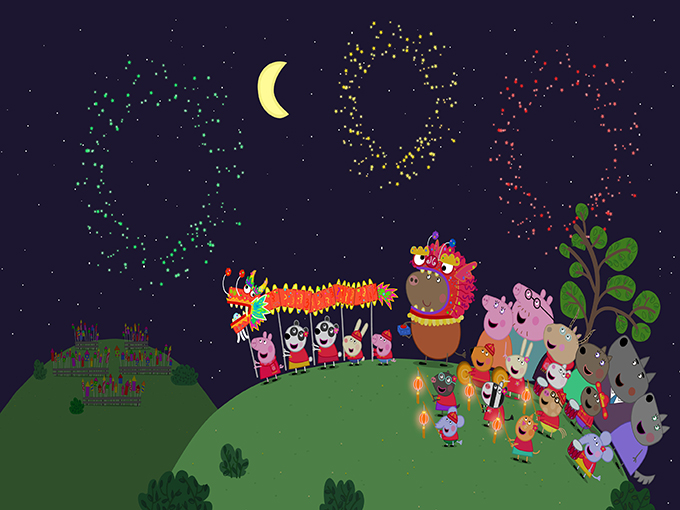 Nickelodeon and several free-to-air broadcasters have picked up eOne’s new Peppa Pig Chinese New Year specials that will debut in the UK on February 5.

Nick plans to air the two new specials across its global network, including in the US. Other channels that have acquired the one-offs include ABC (Australia), TVNZ (New Zealand), Channel 5′s preschool block Milkshake (UK), RAI (Italy), France Televisions, CLAN (Spain), Treehouse (Canada)and ETV (South Africa). They will also run in local languages across Asia, including such Taiwan (YoYo) and Hong Kong (nowTV). Several nets also have VOD platforms, and will be streaming the Peppa specials on them.

The broadcasts are part of eOne’s strategy to celebrate the Year of the Pig with Peppa Pig throughout 2019. A nationwide cinematic release of Peppa Celebrates Chinese New Year, co-produced with China’s Alibaba Pictures, will be released in China on February 5.

Starring a family of animated pigs who play and learn together, Peppa Pig has been translated into more than 40 languages and broadcast in 180-plus territories. In 2017, it made US$1.2 billion in licensing and merchandising revenue.

The broadcasts coincide with the release of exclusive Peppa Celebrates Chinese New Year merchandise and large-scale retail activations on Tmall, which stem from a recent partnership eOne signed with the leading Chinese e-commerce platform to help promote Peppa Pig in the region. UK-based Merlin Entertainments is also opening a new Peppa Pig World of Play indoor attraction in Shanghai this year.