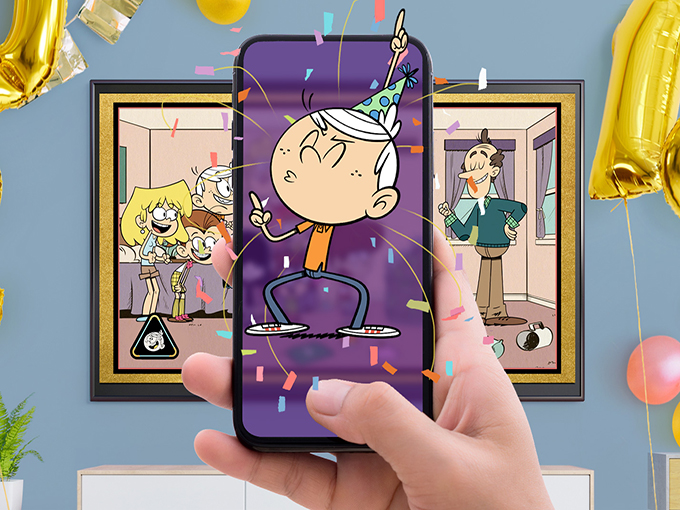 The kidcaster is going to debut an interactive Loud House marathon that will let kids collect character stickers to unlock activities.

Nickelodeon is preparing to ring in 2019 with a New Year’s Eve Loud House Party interactive marathon from 5 p.m. to 9 p.m. on December 31. Using the Nickelodeon Screens Up app, the event will allow live viewers to unlock and collect augmented reality versions of Loud House characters to interact with.

The app is available for free now through the App Store and Google Play. It will feature series main character Lincoln Loud and his family and friends in the form of AR stickers, and end with a big New Year’s Eve dance. Users need to be on the lookout throughout the show for each of Lincoln’s sisters and his best friend to pop up in graphic overlays during the on-air marathon. When they spot one, they can “capture” it by pointing their phone’s camera at the TV screen, which will unlock special AR stickers; collecting all the stickers will unlock even more bonus sticker options.

On the app or on the website, viewers can also participate in live votes, meme makers, trivia and polls with real-time results tallied on-air.

The event is part of the kidcaster’s plan to bring more interactivity and gamification into linear television to drive live viewership. Nick is also currently in production on an original virtual and augmented reality series that will be its first show made with virtual camera technology, dubbed Meet the Voxels. And the channel launched a series of new AR apps at its most recent upfront earlier this year.

Nickelodeon will also be running a PAW Patrol marathon on December 31 from 8 a.m. to 3 p.m., while TeenNick airs “Watch-A-Thons” of movies and specials from 6 a.m. to 10 p.m., and NickToons runs marathons of The Adventures of Kid Danger and Fairly OddParents from 6 a.m. to 5 p.m.