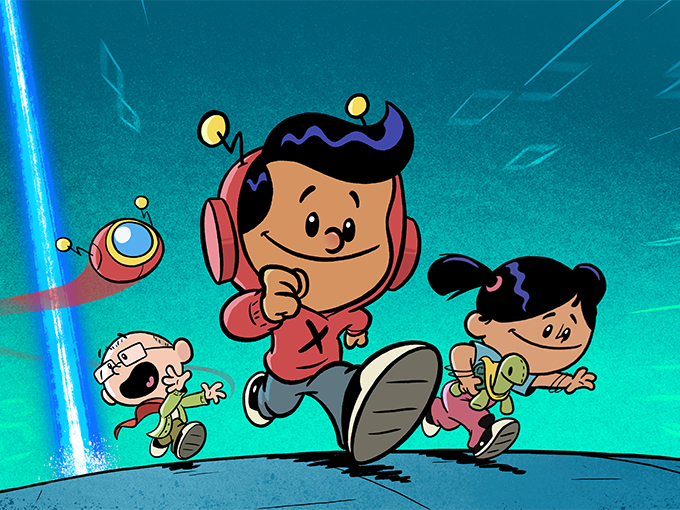 Through their longstanding relationship, PBS KIDS and 9 Story Media Group have successfully helped preschoolers develop emotional intelligence and explore their curiosity with programs like Daniel Tiger’s Neighborhood and Peg + Cat. Now, the broadcaster and production company are focusing on exposing children to real-life heroes, and helping them build global citizenship skills.

“Kids today need exposure to real heroes instead of what’s being delivered to them as heroes and what they are seeing around the world,” says 9 Story president and CEO Vince Commisso.

“It isn’t to say there aren’t heroic qualities in the people they are seeing, but over time cultures define what a hero is, so I think it’s great for kids to get a better understanding or a broader sense of what makes a hero today.”

Each “I Am” book in Meltzer’s Ordinary People series features the story of a significant historical figure when they were a child. Real-life social, political and cultural heroes showcased in the books include Jim Henson, Rosa Parks, Gandhi, Jane Goodall, Sonia Sotomayor, Helen Keller, Martin Luther King Jr. and Sacajawea.

For the TV series, Xavier, his younger sister Yadina and overly anxious best bud Brad travel through time to join real-life heroes on their adventures as kids. Along with the stories, Commisso says he’s equally impressed by the look of the new program.

“Everyone in the studio is super-excited because it’s kind of a Calvin and Hobbes meets Peanuts style, which is very cool,” he says.

For Angela Santomero, 9 Story’s first chief creative officer, the show’s greatest takeaway is the ability to instill in kids the belief that they can accomplish great things.

“The idea that kids can see kids just like them who have grown up to do extraordinary things in real life will be impactful for today’s youth,” says Santomero.

Another new PBS KIDS show on 9 Story’s slate is Let’s Go Luna (formerly Luna Around the World). The board-driven series from Rocko’s Modern World creator Joe Murray follows three friends—an Aussie wombat, a Mexican butterfly and an American frog—that travel the world with their parents’ performance troupe, with title character, Luna the moon, as their guide.

The series, which also targets four- to seven-year-olds, is scheduled to premiere November 21 on PBS stations in the US, the 24/7 PBS KIDS channel and PBS KIDS digital platforms. Each episode in the 40 x half-hour series will include a pair of 11-minute stories, as well as interstitial content featuring live-action segments about arts and culture and animated folktales and songs.

“The show will travel to 20 cities in the world, with each city getting four visits so kids can get a deeper, incremental cultural learning experience,” says Commisso.

From a design perspective, the show is inspired by art from the late, great Disney animator Mary Blair, particularly her work on Disneyland’s It’s a Small World attraction. According to Commisso, it’s unlike anything 9 Story has done in the past. Natasha Sasic is the project’s art director, and Dave Brown is director.

Meanwhile, Scholastic’s all-new Clifford is also in production with 100 Chickens Productions and 9 Story’s Brown Bag Films as animation partner. Based on the 1963 bestselling book series by Norman Bridwell, the preschool series will follow the iconic big red dog and his best friend Emily Elizabeth, while honing in on social-emotional skills.

PBS KIDS and Amazon Prime Video in the US will bow Clifford in fall 2019. The original series premiered on PBS KIDS in 2000 and went on to earn nine Daytime Emmy nominations.