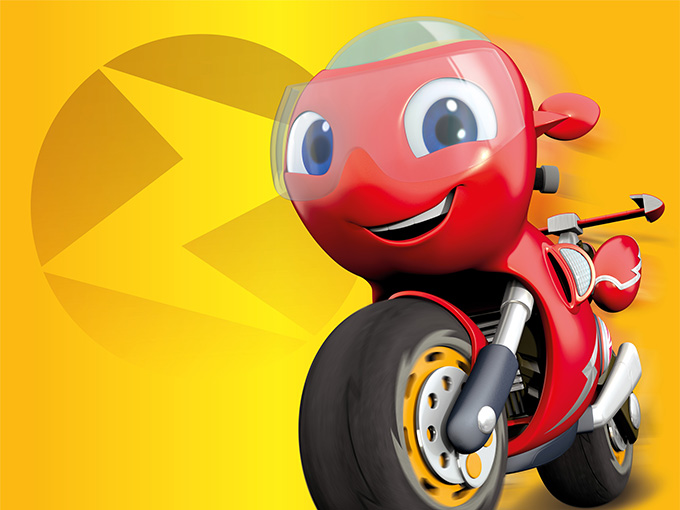 Pedal to the metal on Ricky Zoom

The 52 x 11-minute series is set to debut in spring/summer 2019 with Gulli (France), Discovery Kids (LatAm) and RAI (Italy). The show blends action and comedy as it follows Ricky Zoom, a spunky red motorbike, on adventures with family and friends in Wheelford, a town tailor-made for bikes.

“There are quite a few vehicle shows out there, so I wanted to make sure we had something that would feel unique,” says eOne president of family and brands Olivier Dumont.

“We didn’t want a show about racing, or anything that confined the bikes to a track. We really wanted something about daily life stories that will resonate with our audience; stories about growing up and the family unit.”

Dumont says the scope of the show is a significant step up compared to past projects as its stories follow not just Ricky but the entire Wheelford community, including his parents and sister, his three best friends and their families. Parisian prodco TeamTO—which has previously partnered with eOne on PJ Masks—developed the world of Ricky Zoom. The first season explores themes of practicing skills, supporting friends, spending time with family and overcoming fears.

“It’s a very rich world, a vast world with quite a few characters,” Dumont says.

“It’s obvious that they’re bikes and therefore have commercial potential,” Dumont says. But rather than relying on the natural translation to vehicle play, he says the team’s focus was on building out the emotional core of the show in an effort to create storylines that could inspire products across all major categories.

“All of the craft has gone into making sure the stories are really strong so that kids and parents will fall in love with the characters,” Dumont says. The hope is that once kids connect with the characters, they’ll want to engage with them through everything from home décor to digital games. This will allow eOne to build out a balanced consumer products program, instead of one that relies disproportionately on vehicle SKUs.

That focus on storytelling and character development is in keeping with eOne’s other animated preschool properties, PJ Masks and Peppa Pig, Dumont says.

“We’ve never had a vehicle show before, but it’s quite typical of an eOne show because we are taking such an emotional angle. The characters aren’t perfect and that gives rise to great stories because they have to overcome their flaws. It’s our interpretation of a vehicle show.”