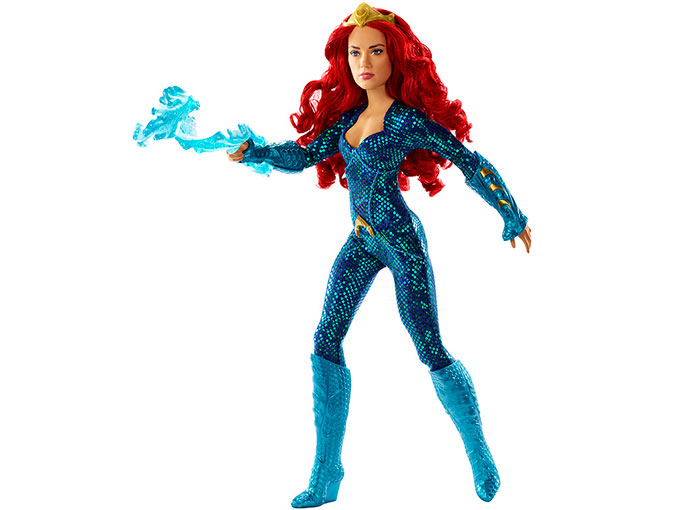 Superheroes seem dark these days. Cloaked in shadows and high-tech bleakness, they occupy worlds that are a far cry from their primary-colored comic book inspirations.

With Aquaman, however, Warner Bros. Consumer Products is ready to make a splash, taking full advantage of the aquatic hero’s environment by bringing the bright colors of a coral reef to its new consumer products and packaging.

“The superhero movies we’re used to seeing take place in urban settings or in outer space, so this is a totally new environment,” says Kevin Morris, VP of worldwide marketing for WBCP. “There are seven underwater kingdoms, and each one has its own citizens and creatures.”

The film (which will come up for air in theaters in December) is about Aquaman coming to terms with his role as heir to the underwater kingdom of Atlantis. He is joined in his adventures by Mera, a fierce warrior with the ability to manipulate water. Morris says that because of the film’s dual protagonists, the toy lines will appeal equally to boys and girls.

Appealing equally to boys and girls, thanks to a focus on the warrior Mera, the Aquaman CP program will refresh in spring 2019 with outdoor and sports items

The consumer products program hit shelves with major retailers around the world on October 1, and Morris says packaging plays a significant role in building out the IP’s underwater environment.

“It was important that the packaging visually cue you to the nature of the story. It’s evocative of an aquarium,” he says. A number of the figures, for example, appear to be floating in their packages, surrounded by underwater motifs.
Toy and roleplay items from licensing partners including Mattel, LEGO, Funko and Rubie’s Costume Company will reflect the different characters’ personalities and powers.

A number of the products will exhibit the characters’ powers through light and sound activations, says Morris. And because transportation in the world of the movie is creature-based—picture an army riding into battle atop great white sharks—vehicle play also features an aquatic bent.

“It’s an incredibly vibrant world. And something to note is that the world of the movie is very technologically advanced. So these products are not only representing the underwater nature of the world, but also the ways these characters have adapted technology to that environment.”

Morris says there are plans to expand into publishing soon, and that spring and summer will present new opportunities for the franchise.

“The movie is coming out in the winter months,” Morris says. “That creates an opportunity in spring and summer to refresh the brand with outdoor play and sports products. Beach play will be a significant category.”