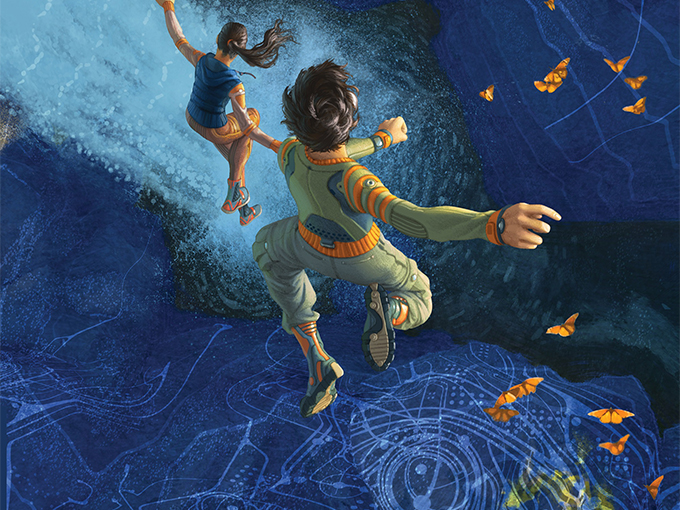 National Geographic Kids is starting a new chapter with Explorer Academy, the first fiction series from its publishing imprint Under the Stars, which launched in February. The seven-book series targets kids ages eight to 12, blending real-world science with out-of-this-world action and adventure.

“We realized there is a huge segment of the market we were missing. No matter how exciting and fun non-fiction is, there are some kids that are just completely turned off by the idea,” says Rebecca Baines, VP and editorial director at National Geographic Kids Books. “National Geographic is in a unique position where we can layer information on top of an exciting story. Our author, Trudi Strain Trueit [Secrets of a Lab Rat], has a knack for taking real information and weaving it into a story that’s a total page-turner.”

The first book in the series, Explorer Academy: The Nebula Secret, follows a group of kids from around the world as they train to be explorers and adventurers at the academy, uncovering a mysterious organization along the way. The books cover everything from code-breaking to augmented reality.

“The information is so cool and seems fantastical, because a lot of people don’t realize the cutting-edge science and technology that we’re on the verge of, and the amazing things researchers and scientists are doing around the world,” Baines says. “The Explorer Academy series features a ‘Truth Behind’ section at the back of each book explaining the technology or scientific principles explored in the story.”

The Nebula Secret hit shelves globally on September 4, and the second book in the series—The Falcon’s Feather—will launch in spring 2019.

A new title is set to roll out every six months.

The Nebula Secret is available in 16 languages, and National Geographic Kids’ global focus is also reflected in the story itself. The characters hail from around the world, including the US, Canada, the UK, Asia and Australia.

“We’re hoping that, by focusing on these different perspectives, we’ll encourage kids to look outside their own bubble,” Baines says.

Baines says the Explorer Academy’s next chapter will include consumer products.

“We hope to expand into licensing, television and maybe a motion picture at some point,” she says. “We consider this a 360-degree property. It’s our first big attempt at that, so we’re very excited to see where we can take it.”