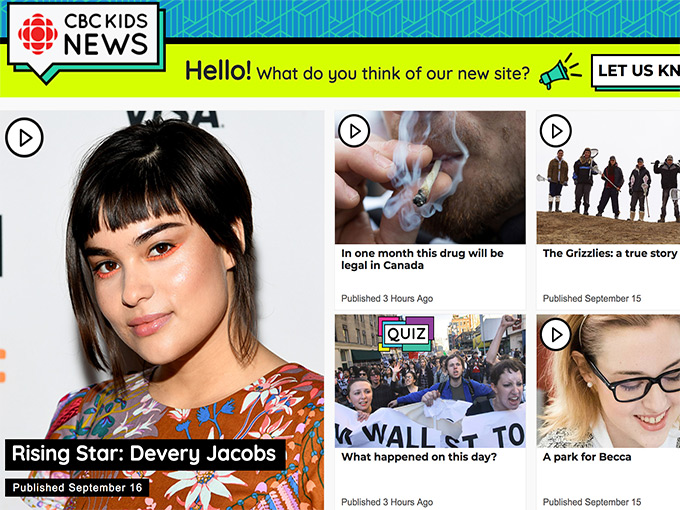 The Canadian pubcaster is rolling out CBC Kids News, a digital-first platform for nine to 13s to improve media literacy.

The Canadian Broadcasting Corporation (CBC) is launching a new digital-first  platform for kids to foster more media literacy amongst nine- to 13-year-olds. CBC Kids News hit the web today, building on a social media base laid by CBC News Snapchat Discover, which began rolling out earlier this month.

The website will cover local, national and international stories that are relevant to Canadian kids in a safe and age-appropriate way. Managed by a team of seasoned journalists working in consultation with an editorial board of young Canadians across the country, the platform is also going to include stories contributed by a group of kids ages nine to 16 who were picked from a pool of 700 young Canadians applicants.

Roughly 20 stories will be posted every week, looking at news, sports, pop culture, science, tech, animals and the environment, and the goal is to increase content over time. Stories will be presented in a mix of formats including text and image pieces, video, photo galleries, audience submissions, quizzes and polls.

The Snapchat Discover platform, meanwhile, targets kids ages 13 and up and marks the first time a daily  Canadian news publisher has been featured on the app. Five times a week, a fresh CBC News edition will be posted to the app, including two or three highly visual segments presenting original and constructive journalism. Later this fall, CBC is also planning to launch weekly culture and entertainment editions on Snapchat Discover.

BBC has been making similar moves over the last year, launching What’s New? a weekly news show for African kids with stories from both Africa and around the world in June. Three months earlier, it also rolled out the School Report, a new initiative featuring free online materials and tutorials, a news literacy game from Aardman, mentoring from BBC journalists and a traveling Reality Check Roadshow tour to improve media literacy amongst UK kids.