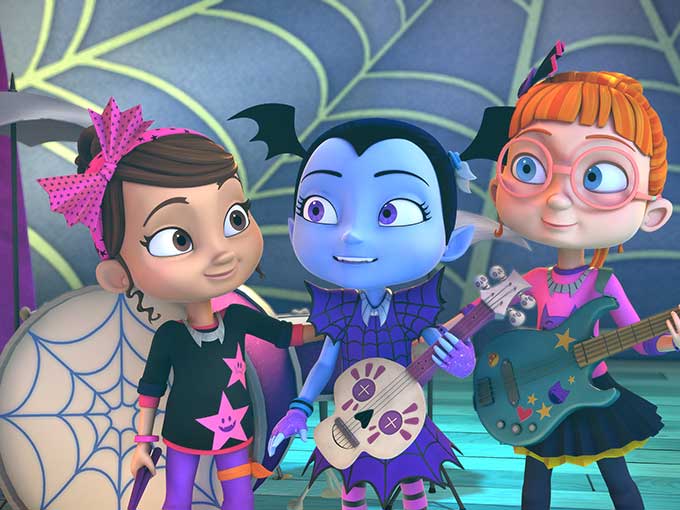 The House of Mouse is ordering new episodes of Muppet Babies, Vampirina and Puppy Dog Pals while adding more CP and theme park activations for the properties.

Disney Junior is bolstering its portfolio with more seasons of Muppet Babies, Vampirina (pictured) and Puppy Dog Pals, and the plan is to build the IPs up at retail and in parks as well.

Muppet Babies has been picked up for a second season following its premiere in March, and Disney Junior has just signed an exclusive licensing agreement with Just Play to create a new toy line for Target in the fall, and a wider assortment of products for spring 2019.

Following the playroom antics of a young Kermit, Piggy and Fozzie, the CG-animated series is executive produced by Tom Warburton, with Matt Danner serving as supervising director and voicing Kermit. It’s an OddBot production in association with Disney Junior and The Muppets Studio.

Meanwhile, Vampirina has been renewed for a third season, despite its second season just getting its greenlight in January. Inspired by Disney Publishing’s popular children’s book series Vampirina Ballerina, the show is from the same creative team as Doc McStuffins, including executive producer Chris Nee, who will serve as a consulting producer on season three. Vampirina is produced by Brown Bag Films in association with Disney Junior.

Disney Parks & Resorts rolled out the Vampirina character at its Disney California Adventure Park in Anaheim for the first time, following the season three re-up.

Produced by Wild Canary in association with Disney Junior, Puppy Dog Pals has also been greenlit for a third season. This series centers around two pug puppies who head out on daily adventures in their neighborhood. Harland Williams created the series and also serves as consulting producer, alongside executive producer Sean Coyle.

In other Disney news, the House of Mouse is releasing new Google Home activities for the voice assistant. On top of a catalogue of games that launched a year ago (including Mickey Mouse Adventure), Maui’s Music Game, Toy Story Freeze Dance and Disney Princess are now also available. The latter lets kids pick a princess, who will then tell them a story or take them on an adventure.