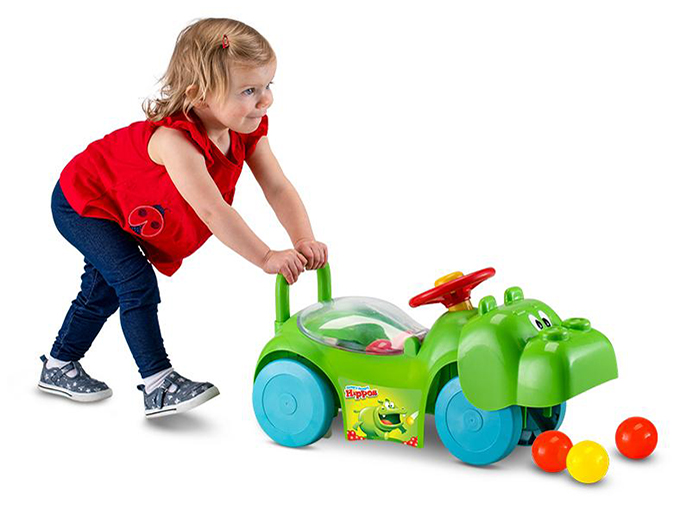 Hasbro is partnering with Kid Trax to launch a ride-on version of the classic board game as its Total Gaming segment continues to grow.

Hasbro is partnering with US toymaker Kid Trax to launch a ride-on version of its Hungry Hungry Hippos game. The foot-powered ride-on lets kids gobble up balls, just like in the classic board game.

Available at Walmart stores across the US and through Walmart.com, the toy lets kids push or ride the green hippo Homer. As the hippo travels forward, its head moves up and down in a chomping motion to collect balls as it rolls over them. After they are collected, the balls are stored in a transparent cover in the seat.  Designed for children ages one to three, the ride-on has a 44-pound weight maximum.

The partnership comes as Hasbro tries to bring its board game brands out of the box, finding new ways of reviving older IP. The toymaker recently inked a multi-property deal with educational app creator Playdate Digital to develop interactive story apps for preschoolers inspired by its hit board games. The first premium title to launch, Chutes and Ladders: Ups and Downs, features animated content, illustrations and learning elements designed to reinforce the concept of cause and effect.

According to market research firm The NPD Group, the Board Game segment saw its US sales increase by 8% between March 2017 and February 2018. And, despite a 7% decline in Hasbro’s Q2 2018 net revenue, the company’s Total Gaming segment rose 14% to US$312.8 million.