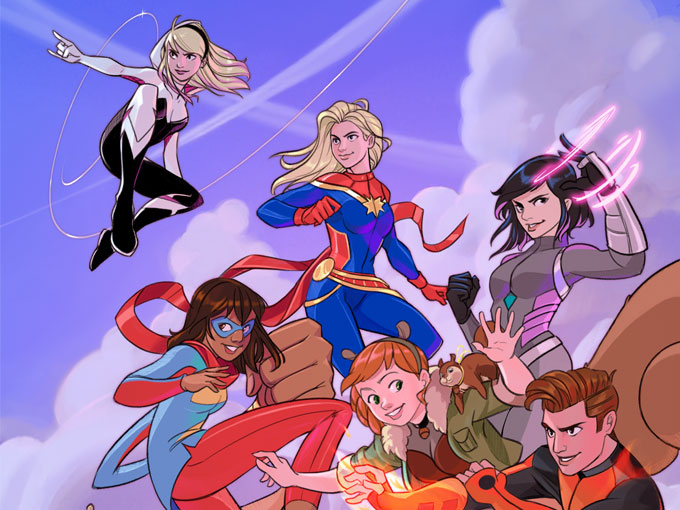 Marvel teams up with Young Storytellers

The superhero producer is partnering with the nonprofit group to bring kids’ short scripts based on Marvel Rising to life.

Marvel Entertainment is joining together with nonprofit group Young Storytellers to host a live event where students will write scripts based on the new animated franchise Marvel Rising and then see them come to life.

Children ages 11 to 13 will work with Disney mentors to write a three to five-page script based on select characters from the new series. The scripts will then be performed by Marvel Animation voice actors Chloe Bennet, Tyler Posey, Kami McFadden, Milana Vayntrub, Kathreen Khavari, Roger Craig-Smith, and Melanie Minichino, with narration by Skai Jackson (Bunk’d, Bubble Guppies).

The event is being filmed to air on the Marvel YouTube channel later this fall.

Marvel Rising is a new animated franchise for tweens that will kick off today with six animated Marvel Rising: Initiation shorts on Disney XD and YouTube. The shorts will then be followed by Marvel Rising: Secret Warriors, an 80-minute animated film premiering this fall on Disney Channel. Both are executive produced by Joe Quesada, Dan Buckley, Cort Lane and Eric Radomski. Stan Lee, Sana Amanat and Marsha Griffin will be serving as co-executive producers. The shorts and film were written by Mairghread Scott, with Alfred Gimeno serving as supervising director.