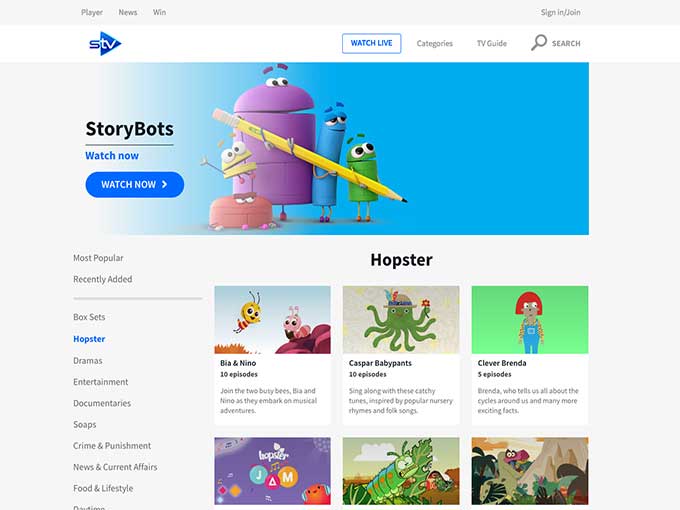 The Scottish pubcaster has picked up hundreds of preschool eps from the SVOD that will be available in a Hopster-branded area within its app.

Scottish pubcaster STV has signed a deal with Hopster for hundreds of episodes of preschool shows to be made available on a dedicated Hopster-branded children’s area within the STV Player VOD app.

Some of the series available include In The Night Garden, Little Malabar, StoryBots, Clever Brenda and Two Minute Tales.

Under the terms of the deal, STV will also be offering marketing and sponsorship for Hopster’s app across its portfolio of brands and services. The partnership is part of STV’s three-year strategy for creative and digital growth that included investing US$19.6 million (GBP$15 million) in original content and its VOD app.

The next phase of the project will include enabling STV Player users to subscribe to Hopster directly from STV’s website, as well as bundling the Hopster app with STV’s ad-free subscription version of the app.

The STV Player Hopster children’s area will be curated to tie into Hopster’s mission and include a “Discovery Learning Map” that teaches early age skills such as sharing, turn-taking, numbers and literacy. Hopster is available through the App Store and Google Play and features a range of media such as animated children’s series, nursery rhymes, music, games and video books.

In related Hopster news, the SVOD app recently closed a multi-million-dollar investment round led by its existing equity investor, Sony Pictures Television Networks to continue to offer its ad-free digital environment for preschoolers.