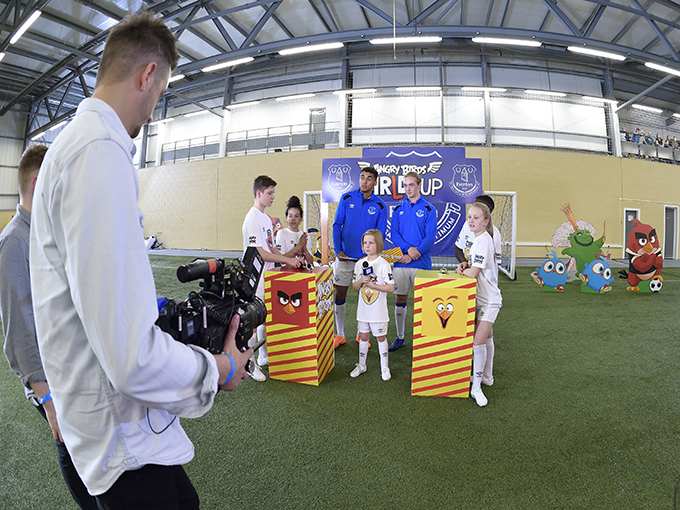 The family-oriented series stars two teams of kids—Team Red and Team Chuck—that square off in a variety of football-themed challenges (soccer for North Americans) alongside top English Premier League professionals, including Everton’s Wayne Rooney. The team with the most points in 10 challenges over the course of 10 episodes gets to claim the coveted “BirLd Cup” trophy.

Following the show’s YouTube premiere today, new eps will drop every Wednesday and Saturday for the following five weeks through July 13. The episodes will also be featured on the YouTube Kids app from June 14.

Animated Angry Birds elements of the series include the loathed Bad Piggies as scorekeepers and appearances by beloved birds Red and Chuck.

Tapping into the power of influencers, each team is captained by a young YouTube star. Nine-year-old Lorenzo Greer, aka “Tekkerz Kid,” leads Team Red while Ruby Clark, who’s featured on her sister’s YouTube channel, Lovevie, is captain for Team Chuck.

The series is made in partnership with UK-based Everton Football Club (Rooney’s current squad), which previously signed Angry Birds as a primary sleeve sponsor.

Both shows fall in line with Rovio’s new multi-year content roadmap, which will be driven by Sony Pictures’ September 2019 theatrical release of The Angry Birds Movie 2, a new long-form animated series for 2020, new live stage shows, location-based entertainment projects and other original live-action and animated content for the Angry Birds YouTube channel.

In other World Cup news, market research firm The NPD Group has found that US$14.7 million has been spent on football and FIFA World Cup-themed toys in the UK alone in the lead up to the tournament, which kicks off later this month.